The “Tonight Show” host admitted that he was always quick to pass judgement on misbehaving kids before he became a father.

“My biggest revelation is how much I ended up caring for other people's kids if that makes any sense. You get it more,” Fallon told Fatherly.

“When I didn’t have kids, if I heard a crying baby in the restaurant, I would think, ‘Can you stop the crying and go around the block?’ Now I would be like, ‘Just give me the baby — how can I help? I’ve been there,’” he explained.

The 46-year-old and wife Nancy Juvonen are parents to 7-year-old Winnie and 5-year-old Franny.

Since welcoming his two girls, he revealed that he's also become more emotional.

“I was always kind of emotional — I think it’s my Irish-Catholic upbringing,” he explained. “Now — Hallmark is for me now. I’m ready for a good cry.”

While Fallon makes much of America laugh nightly, his kids aren’t as easily impressed.

“I’m starting to get the eye rolls now where Daddy’s not the funniest person in the world,” Fallon revealed while chatting with Hoda and Jenna on Tuesday’s episode of TODAY.

Since July, Jimmy Fallon has been hosting his late night talk show without an audience due to the coronavirus pandemic. 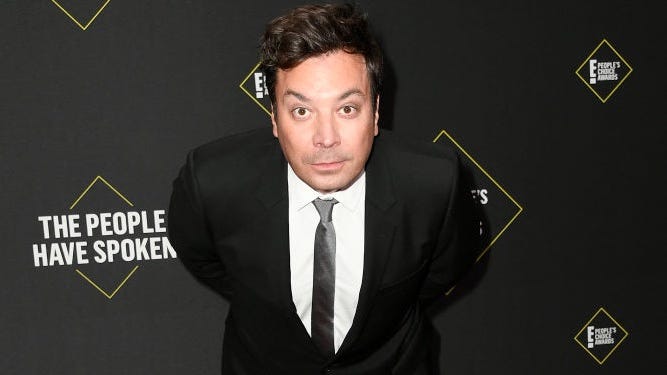 Prior to that, he spent months hosting the show from home with the help of his adorable family.

During his segments, which he posted on YouTube, the host showcased daily things he and his family do while social distancing. He also continued to perform sketches that he usually did during his show.

Winnie provided the music in place of The Roots and also took on being in charge of the graphics department. Meanwhile, his wife filled in for the camera crew, as his other daughter simply cuddled up to her dad as he tried to keep a straight face.