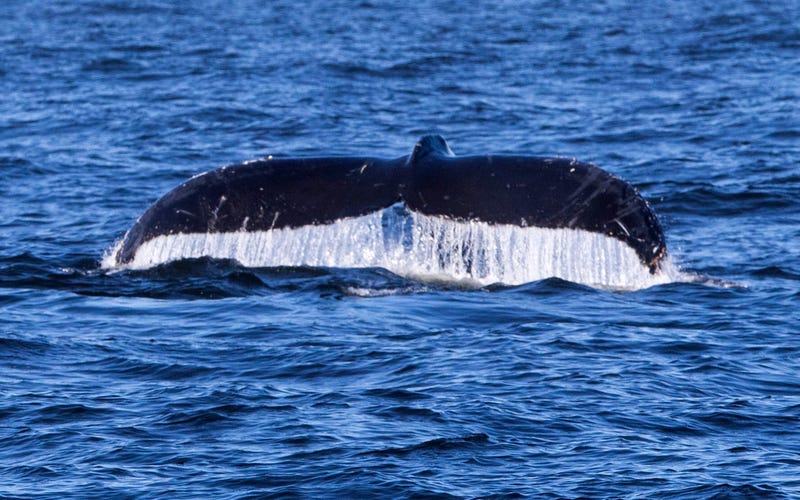 PHILADELPHIA (KYW Newsradio) — Marine experts are trying to find out what killed a humpback whale that washed up on the Jersey Shore on Christmas Day.

Bob Schoelkopf, director of the Marine Mammal Stranding Center, said beachgoers reported it, and staff and volunteers immediately went to the scene.

“The whale washed back out again when they went to look for it,” he said, “and it ended up coming in at Barnegat Lighthouse State Park.”

When people heard about the carcass, they flooded the beach. Schoelkopf estimated 1,500 people had flocked to the beach over the past couple of days.

“There had to be 500 people there (on Monday),” he said, “all of them coming into the state park … and then walking the mile-and-a-half jetty to get to it. A lot of them were disappointed that we buried it too soon, and they didn’t get to see it.”

On Monday, local, state and federal marine experts used two front-end loaders to dig a trench and roll the whale into it, then smooth sand on top of it. By the early afternoon, the only sign that a massive whale had been there was a lingering stench in the immediate area.

The dead whale was on the beach for a few days before it was buried, mainly because it was a holiday weekend.

“The challenge is coming up with the equipment on a holiday weekend when there’s no one aware or available to help us out,” Schoelkopf added. “Luckily, this worked out with Barnegat Light (Borough) agreeing to help us and provide the heavy equipment.”

The male humpback was frozen solid, so it could not be cut into pieces for removal, as is commonly done in other cases in which dead whales wash ashore.

Schoelkopf said the whale may have died after being hit by a boat or contracting a disease. The animal likely ended up ashore due to the severe thunderstorms that passed through on Christmas Eve.

Before it was buried, Schoelkopf said people were taking advantage of the scene.

“We had a problem with people sitting on the whale with their children, taking pictures, having their dogs lick the animal. This is a no-no, to start with. It’s a dead animal — we don’t know why it died, and this is not something you want to do, so keep your distance when you’re on the beach with a dead animal,” he advised.

“If people in New Jersey knew how many whales we have buried on beaches along the 118-mile coastline, they’d be amazed. And they’d never come up again. But there’s more whales buried than people could ever guess.”