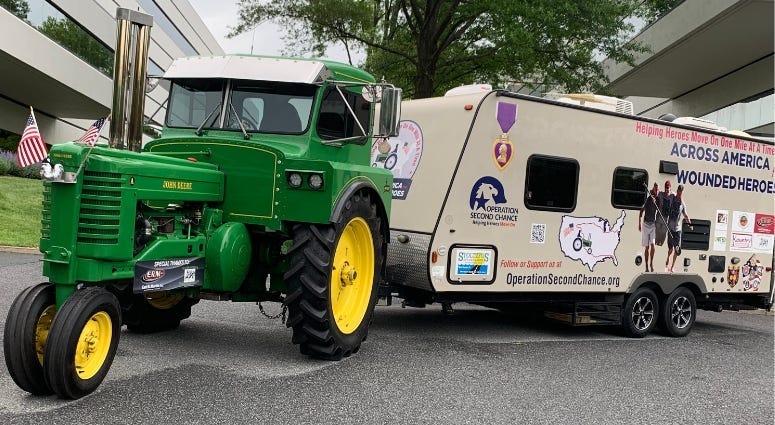 Country singer Jason Aldean once wrote, ” I can take you for a ride on my big green tractor,We can go slow or make it go faster … Long as I'm with you it really don't matter.”

Those may be words from the love song “Big Green Tractor” but they capture the spirit of a cross-country road trip on a farm tractor dubbed, “Across America for Wounded Heroes,” which is benefitting Operation Second Chance (OSC). 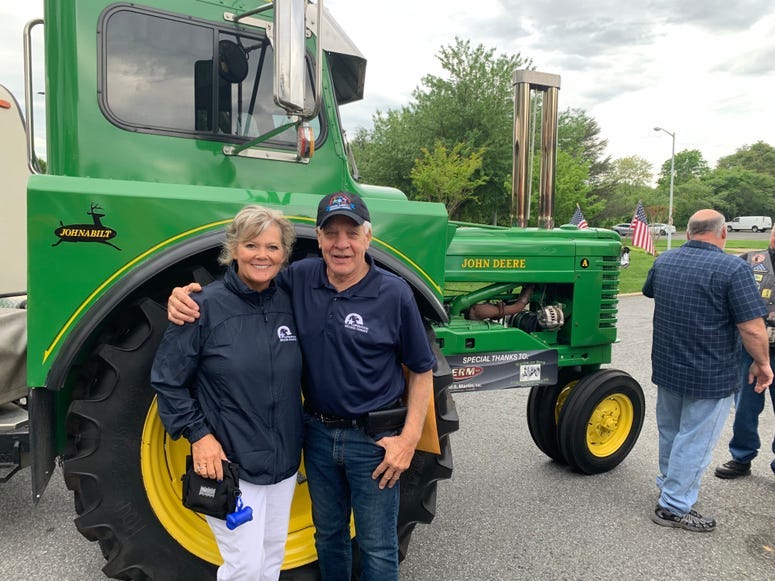 Above: Cindy McGrew and Ivan Stoltzfus stand in front of his modified tractor.  With the cab of a Peterbilt semi atop a John Deere tractor, it's affectionately known as a "Johnabuilt"

“I see a lot of soldiers and veterans trying to adjust back to civilian life, and I always thought ‘I want to do my part’ to help”, explained trip founder and retired farmer, Ivan Stoltzfus.

Ivan described how he had always been inspired by his father who traveled the country doing farm work and once told him, “If you have a dream don’t wait till you’re too old to do it.”

So on a sunny Friday morning in May, his dream of helping vets became a reality, as he set out to drive his modified 1948 John Deere tractor from Maryland to Montana, eventually ending in Sarasota, Florida.

By the numbers the journey is impressive: spanning 6 months, covering over 5000 miles, traveling at speeds of 14mph and hoping to raise countless dollars for Operation Second Chance. 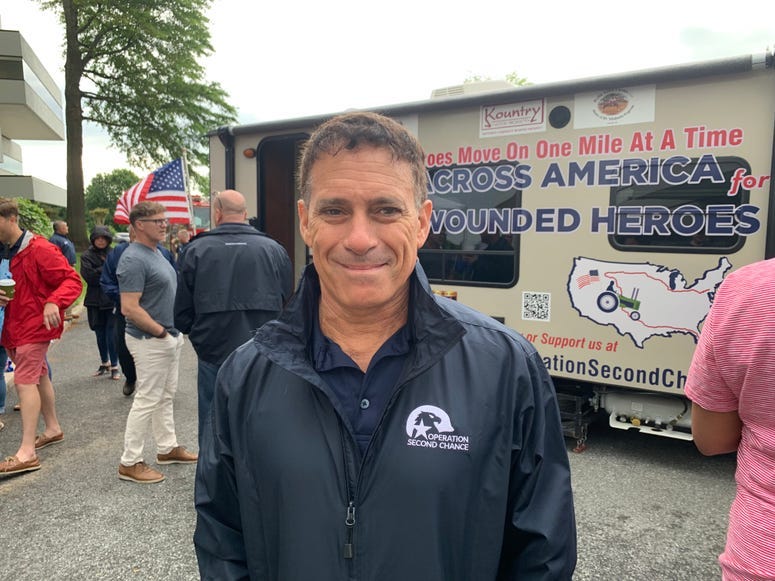 “We provide emergency financial assistance to our nations combat wounded, injured and ill veterans” explained  Operation Second Chance, Outreach Director, and (Ret) Air Force Lt. Col Andrew Lourake. “So if vets are falling behind on their mortgage payments we will help band-aid them … Through a caseworker, we help them apply and usually turn it around within 24 to 48 hours, so they can stay above water.”

In addition to emergency funding for life’s needs, OSC helps over 1000 veterans each year feel love through outdoor excursions and couples retreats. “In nine states we have different retreats, everything from fishing trips to camping and horseback riding to going to a nice hotel and hanging out on the beach,” Lourake said. 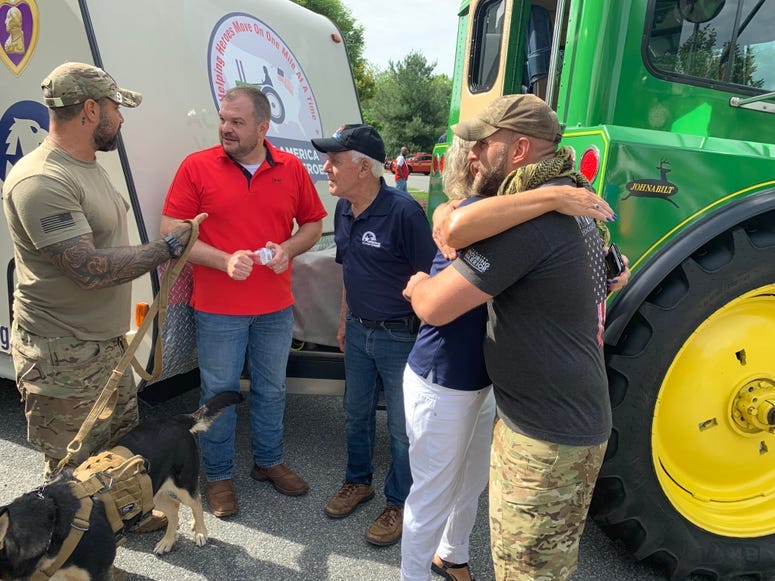 Above: Cindy McGrew always has hugs for the special veterans in her life.

Behind the funding and excursions, OSC provides the sincere love and appreciation of its founder, Cindy McGrew. “I have 4 older brothers and 3 served in Vietnam. Those three are now buried in Arlington, and I saw how they were treated when they came home … Then my friend went to Iraq in 2004. I started reading about guys from his unit that were wounded and coming to Walter Reed. So I started going and visiting them and thought it was only going to be for a year. Now here I am 15 years later and we’ve luckily been able to provide over $7M to our wounded, injured and ill combat veterans.” 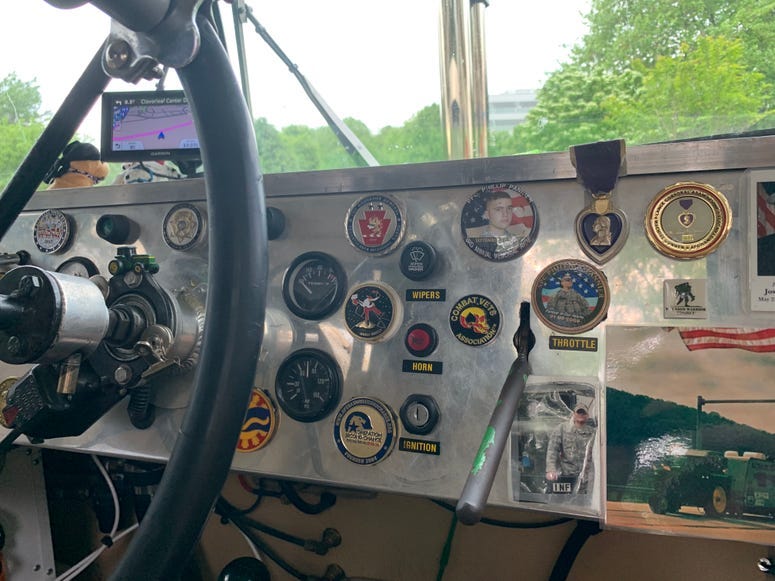 Watching over Ivan in the cab of his tractor is a Purple Heart medal, donated by Army combat veteran Jeremy Jackson. “I met Ivan when his tractor was passing through my town,” explained Jackson. “I know a lot of people say and do things for veterans, but Ivan really takes it to a whole new level.  So I went back and got my purple heart, gave it to him to take on his journey. It wasn’t meant to be a publicity stunt, just a little something to lift his spirits.” 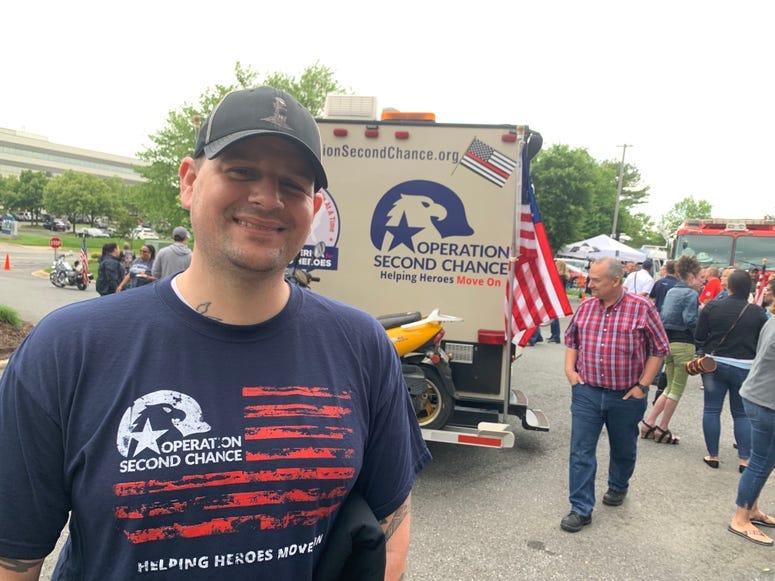 With an average speed of 14 mph, the road may take a long time, but as Ivan pointed out, “I won’t get any speeding tickets.” 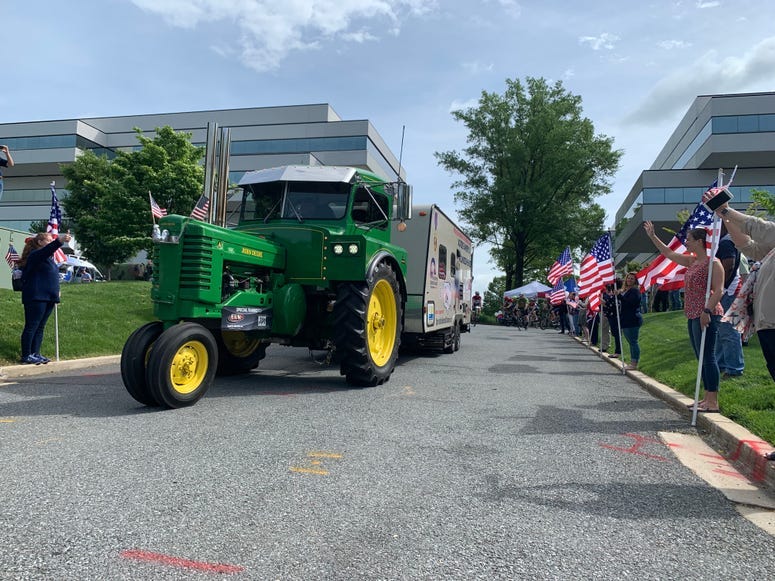 Above: The tractor rolls out of the parking lot to begin its cross country adventure 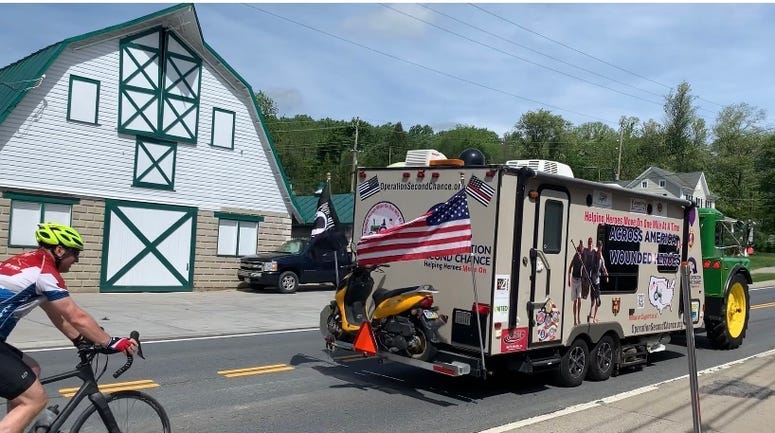 Taking the back roads: Cyclists follow the tractor and trailer as it passes through Hyattstown, Maryland.

You can track the progress of  Across America for Wounded Heroes here.

And to support the mission and Operation Second Chance click here