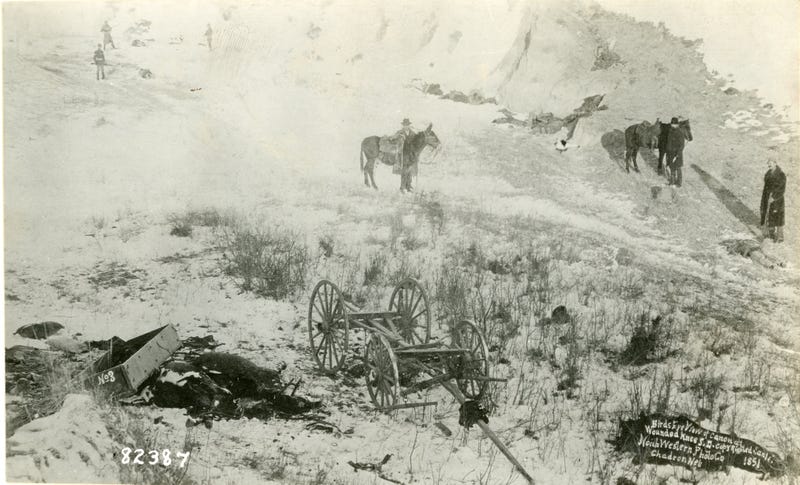 Twenty soldiers received the Medal of Honor for actions at Wounded Knee, South Dakota on December 29, 1890. The "Remove the Stain Act" wants to rescind them.

The battle at Wounded Knee was dubbed a massacre in 1990 — on the massacre's 100th anniversary, the 101st Congress "expressed its deep regret on behalf of the United States" for the "terrible tragedy." Yet 20 service members still hold the country's highest military honor for "gallantry beyond the call of duty" for actions committed at Wounded Knee.

“The horrifying acts of violence against hundreds of Lakota men, women, and children at Wounded Knee should be condemned, not celebrated with Medals of Honor,” said Senator Elizabeth Warren, D-Okla. Warren introduced the legislation in the Senate.

“The Remove the Stain Act acknowledges a profoundly shameful event in U.S. history, and that’s why I’m joining my House colleagues in this effort to advance justice and take a step toward righting wrongs against Native peoples.”

“History must reflect that Wounded Knee was a massacre of hundreds of defenseless Native men, women, and children at the hands of U.S. soldiers,” Harris said in a press release. “We will never be able to remove the pain and trauma caused by these acts of violence, but we can continue to fight for justice. Revoking these Medals of Honor is one step forward and I am proud to join my colleagues to address our country’s wrongs.”

This would not be the first time Congress rescinded Medals of Honor from service members — and the first instance was far more than twenty awards. In 1916, Congress created a review board to examine recipients of previous Medals of Honor. The result of the review saw more than 900 awards rescinded including the entire 27th Maine, 29 members of President Lincoln's funeral guard, and six civilians.

Some of these 900 rescinded awards were later restored including that of civilian doctor Mary Walker — the only female to receive the Medal of Honor. Walker's award was restored in June 1977.

Since this 1916 review, Congress has regularly passed legislation to review the records of certain servicemembers to award or upgrade awards to Medals of Honor.

The "Remove the Stain Act" has garnered the support of several veterans organizations and half a dozen tribes and Native American communities including the Cheyenne River Sioux Tribe, the Oglala Sioux Tribe, and the Shakopee Mdewakanton Sioux Community.

“Native people serve in the United States Armed Forces at a higher rate than any other group in the United States, and Senators Elizabeth Warren and Jeff Merkley’s introduction of the Remove the Stain Act not only shows respect to these brave Native men and women who in some cases gave the ultimate sacrifice for this Nation with their lives, it also brings justice and healing to the Wounded Knee Descendants,” said Harold Frazier, Chairman of the Cheyenne River Sioux Tribe.