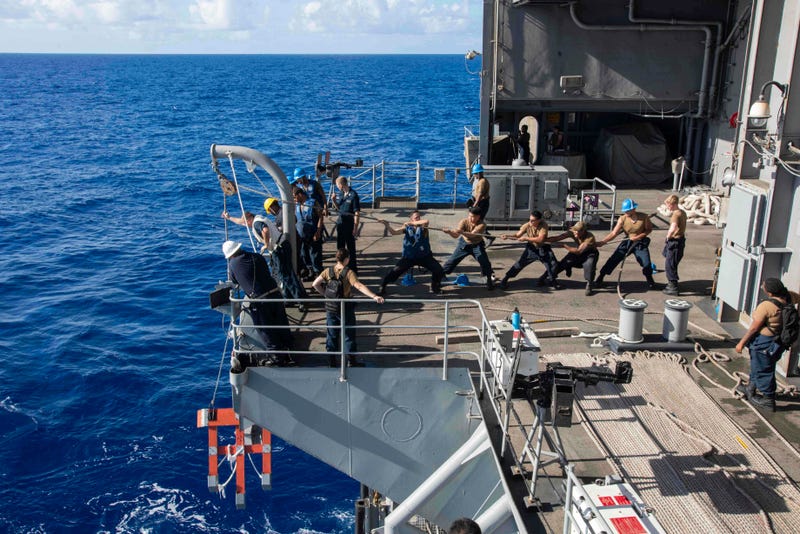 The deployed USS Theodore Roosevelt has been ordered to port at Guam as confirmed COVID-19 cases on board the vessel increase.

"We found several more cases...We are in the process of testing 100 percent of the crew of that ship," said acting Secretary of the Navy Thomas Modly at a Pentagon press briefing on Thursday. "The ship is operationally capable if called upon to do so...but we are pulling the ship into Guam. Nobody from the ship will be allowed to leave the ship other than on the pier."

According to Modly, the USS Theodore Roosevelt has 800 test kits on board — not enough to test the 5,000-member crew.

"We're flying more on there today as we speak," Modly added.

"Our medical team aboard USS Theodore Roosevelt is performing testing for the crew consistent with CDC guidelines, and we are working to increase the rate of testing as much as possible," Chief of Naval Operations Adm. Mike Gilday said in a statement. "Immediate priority will be symptomatic sailors, those in close contact with sailors who have tested positive already, and essential watch standers. We are isolating those who test positive."

The Navy announced three cases of COVID-19 aboard the USS Theodore Roosevelt on Monday. McClatchy's Tara Copp, however, reported at least 23 positive cases as of Thursday. The Navy has not confirmed that figure.

Navy official just confirmed to me that number of #coronavirus positive cases aboard TR is now at least 23, and may be at least 25 "the number is changing," official said. Confirms @nancyayoussef scoop for WSJ https://t.co/XNiYojq5UX

"The sailors flown off the ship are doing fine, none of them have been required to be hospitalized," Modly added.

The United States Navy has been hit disproportionately hard by the virus — with 133 confirmed COVID-19 cases, the Navy accounts for roughly a third of the overall Department of Defense diagnoses. Those 133 cases include 104 active-duty sailors, 23 Navy civilians, 16 Navy dependents, and 19 Navy contractors.

"We're taking this day by day. Our top two priorities are taking care of our people and maintaining mission readiness," Gilday's statement reads. "Both of those go hand in glove. We are confident that our aggressive response will keep USS Theodore Roosevelt able to respond to any crisis in the region."

As of Thursday morning, the Department of Defense was tracking 600 cases overall across the force.