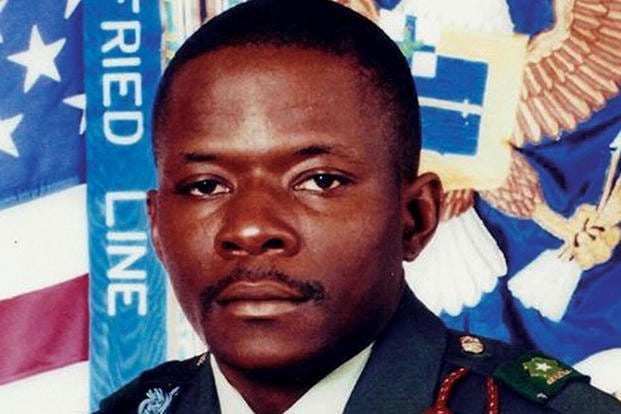 Alwyn Cashe, Army sergeant first class and war hero, was the baby of his family, adored by everyone. They never expected he'd be the first one they'd lose.

He was their hero long before he became America's after rescuing fellow soldiers in Iraq.

Now, his family is one step closer to getting Cashe, 35, the recognition he deserves for the 2005 rescue when he pulled his fellow soldiers from a burning Bradley Fighting Vehicle and sustained burns that would later cost him his life.

House lawmakers on Tuesday unanimously advanced a bill to allow the president to posthumously award Cashe the Medal of Honor for the rescue that led to his death. Cashe was originally awarded the Silver Star for his actions in Iraq, but Congress must waive the current policy requiring Medals of Honor to be awarded within five years. Congress has waived that five-year limit in the past and Defense Secretary Mark Esper said he supported the move to upgrade Cashe's award.

If he is awarded the Medal of Honor, Cashe would be the first Black service member to receive the award for actions during the Global War on Terror.

“After giving the nomination careful consideration, I agree that Sgt. 1st Class Cashe’s actions merit award of the Medal of Honor,” Esper wrote in August. “Before we can take further action with this nomination, Congress must waive this time limit. Once legislation is enacted authorizing the president of the United States to award, if he so chooses, the Medal of Honor to Sgt. 1st Class Cashe, I will provide my endorsement to the president."

"We just call him Al," White said, smiling. "He's my baby brother, the last child born of my mother. She would be sitting here ... unfortunately it was not God's will that she see it to the end but it is my desire to see it to fruition."

Cashe's family and supporters have been working for years to see his award upgraded.

"I thought I had exhausted all my options. I told my kids I can't leave this world without it happening," White said. "Hopefully (it passes) so that Alwyn will get the medal that he deserves and so no other service person has to go through what we've gone through."

It's because of Cashe's fellow service members and veterans the family has learned more about him over the years.

"They know him," she said. "We learned a different side of our brother, a very positive and generous side we knew, but we didn't know the military side."

One of those is Alejandro Villanueva, a Steelers player and Army veteran who wore Cashe's name on his helmet during a recent game.

"Pittsburgh knows my brother's story and I'm thankful for that," White said.

White was firm when she said she didn't believe discrimination played a role in the wait for Cashe's award upgrade, saying she believed Army officials did the best they could with the information they had at the time.

"We knew it wasn't a race thing," she said. "Because he didn't stand at the Bradley and pull out only the black guys ... he pulled them out because they were his boys, they were his men. He loved them and they loved him ... He did what he did because he was a soldier."

Grassroots efforts have sprung up to rename a military base for Cashe, perhaps one of those currently named for a Confederate leader. White said she wouldn't want anything taken away from someone else in order to honor her brother, and neither would he, but she would celebrate any way the Army chose to honor him.

Cashe was the youngest of eight siblings, and his family still mourns him.

"He was my baby," White said. "He was the youngest. I didn't feel like he was the first of our family, of the children, to die."

Cashe is "a hero in the purest and most profound sense," Murphy said. "What he did on that Iraq battlefield takes your breath away."

Cashe was on patrol in Diyala Province on Oct.17, 2005, when an improvised explosive device detonated under his Bradley. Drenched in fuel, Cashe ran to and from the vehicle to pull the remaining six soldiers to safety -- even though he was on fire. He died from his burns at Brooks Army Medical Center in Texas on Nov. 8, 2005 -- three weeks after he rescued his comrades.

White has told the story of sitting by her brother's bedside in the weeks after the rescue many times, first to the Los Angeles Times. When he first regained consciousness and was able to speak in the days before his death, she said his first words were, "How are my boys?" When he heard that not all survived, he cried and told his sister, "I couldn't get to them fast enough."

He's "an American hero who did incredibly brave things and deserves the Medal of Honor," Murphy said. "I think there's agreement to that -- I don't think that's something that can be disputed."

It's unclear if the bill will make it through the Senate before the end of the year, with so few legislative days left on the calendar, and major legislation so far left undone, including the National Defense Authorization Act (NDAA) and any additional pandemic relief. Murphy said she has a "backup plan" in the event the bill doesn't make it through the Senate. She and the other sponsors, Reps. Dan Crenshaw, R-Tex., and Michael Waltz, R-Fla., plan to include a measure in the must-pass NDAA that will accomplish the same goal. Murphy said the NDAA is expected to pass in November or December.

“With unanimous passage of our bill by the House today, we are one step closer to ensuring that Alwyn Cashe receives the Medal of Honor he earned,” Murphy said in a statement following the vote. “I am grateful that so many Americans are learning of and being inspired by Sgt. First Class Cashe’s heroic actions, which are so extraordinary they nearly defy description. Now our fight to properly honor this soldier turns to the United States Senate, where I know we will have many allies. We will not stop working until we get this across the finish line.”