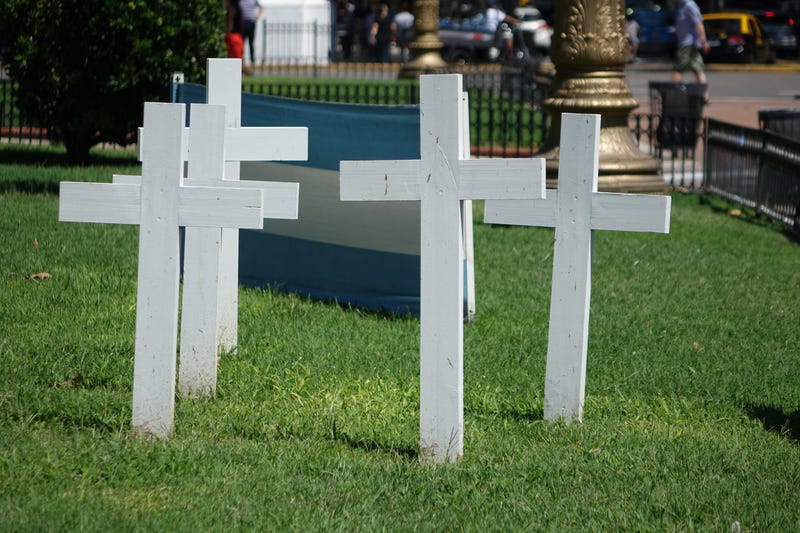 HOWELL, Mich. (AP) — When U.S. Army veteran Jon Luker returned from serving in the Panama Canal Zone during the Vietnam War era he struggled with his mental health.

“I was just walking around confused and not motivated to get involved in anything, but I didn’t understand the source of my confusion, why I was tired all the time and why I couldn’t get sleep,” Luker told the Livingston Daily.

Luker, 69, said his own experience overcoming an existential crisis inspired him to take over coordinating a veterans suicide awareness project originally founded by the Veterans Refuge Network.

Hundreds of crosses have already been installed outside the American Legion post in Howell Township to bring awareness to veteran suicide.

Each day 22 new crosses are installed. The number is based on a 2013 U.S. Department of Veterans Affairs study that estimates about 22 veterans committed suicide each day between 1999 and 2010.

A 2019 report from the VA estimates the average number of veteran suicide deaths per day equaled or exceeded 16 between 2005 and 2017.

Luker said it is difficult to know the real number of veterans who die from suicide each day. He said he suspects the deaths are under reported.

By the end of this month, there will be 660 crosses outside the American Legion, signifying 22 suicides a day for 30 days.

Luker said there are several reasons some veterans do not receive help, including stigma surrounding mental health.

“It’s a little hard on your ego to consider yourself as someone who cannot function, especially when you’ve been in the military and you are supposed to be able to do anything,” he said. He added that some veterans are afraid of losing jobs that require them to maintain security clearances.

“The VA is underfunded. ... I think many veterans think, if I get this service, then someone else won’t who needs it more,” he said.

He also said he thinks the VA’s mental health services are subpar.

Brighton businessman John Conely said his uncle Bud Conely took his own life at the age of 40, around the time John was born in 1962. John and his aunt, Evelyn Conely-Montgomery, Bud’s sister, dedicated one of the crosses to him by writing his name on it.

“He was a POW from the Battle of the Bulge,” during WWII, John Conely said. Bud Conely returned to the U.S. weighing about 95 pounds. “He recovered and stayed in the army, working as a Nazi POW guard in Michigan and Ohio. He was quite a hero.”

“It’s closer to home than we know,” Conely said. “We as citizens are responsible for taking care of veterans and knowing what we can do to help them.”

“Everybody knows someone,” Bright said of the veteran community.

He said the crosses are meant to spread awareness to the general public and also create opportunities for veterans and those who have lost loved ones to connect with one another.

“I think people have become more aware. Prior to today’s awareness, it went largely ignored,” Bright, 53, said. “Older guys tend to be more private than the younger guys who aren’t as afraid to say they are depressed.”

He said he admits he is still uncomfortable hearing veterans speak about PTSD and depression.

“It’s a topic that is borderline taboo,” he said.

Looking back, he said he remembers feeling angry that life was going on in America when he came home from the war.

“They weren’t focused on what I was focused on, which was worrying every single day you wouldn’t come home. … You go from being extremely alert and aware of your situation to going home,” where the pace of life is different, he said.

He said he thinks many veterans struggle to reorient themselves to civilian life.

“They come back and don’t have a mission,” he said.

There are a variety of resources that can help veterans struggling with mental health.