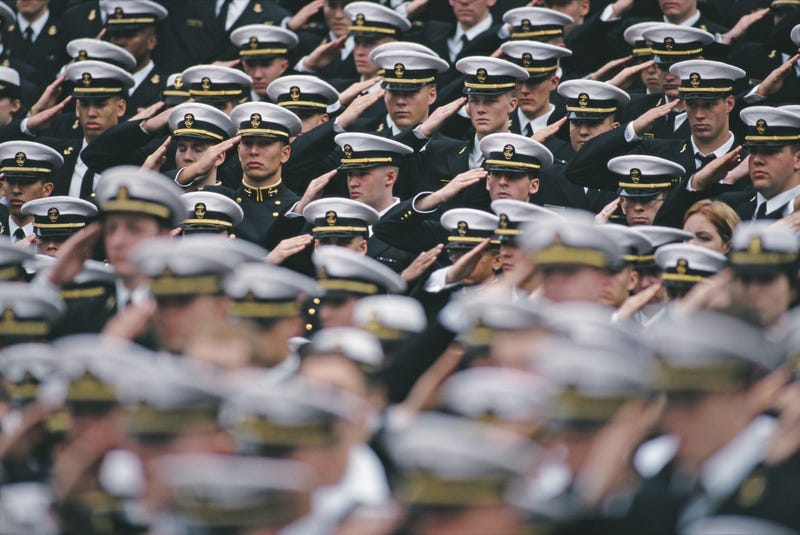 ANNAPOLIS, Md. (AP) — A midshipman is suing the U.S. Naval Academy after he was disciplined for tweeting that Breonna Taylor received "justice” when she was fatally shot by police.

Midshipman 1st Class Chase Standage, 21, says in the lawsuit that the academy is violating his constitutional rights of free speech and a fair and impartial hearing, the Capital Gazette reported Thursday.

In addition to the tweet about Taylor, a Black woman who was fatally shot by officers who barged into her Kentucky home, Standage was also accused of tweeting racist messages against Black people.

In the lawsuit, Standage's attorneys write that Standage’s June tweets were responses to heated exchanges on Twitter. They also said Standage “has never exhibited racial animus towards anyone.”

Standage, who lives in California and is the son of police officers, was at home watching the protests against racial injustice in Los Angeles when he sent his tweets, the lawsuit said.

An investigation ended last week with Standage receiving “appropriate administrative action,” but an academy spokesperson didn’t elaborate on the specific nature of the action, citing the Privacy Act. The Naval Academy said it is aware of the lawsuit but would not comment on pending litigation.

In his lawsuit, first reported by Courthouse News, Standage said Superintendent Vice Adm. Sean Buck plans to recommend to the secretary of the Navy that Standage be separated from the Naval Academy. Both Buck and Navy Secretary Kenneth J. Braithwaite are named in the lawsuit.

The basis of separation is that Standage’s tweets violate the Naval Academy’s policies against political activities and “constituted conduct unbecoming a midshipman,” according to the lawsuit filed in the U.S. District Court for the District of Maryland.

The U.S. Attorney’s Office will represent the Navy.