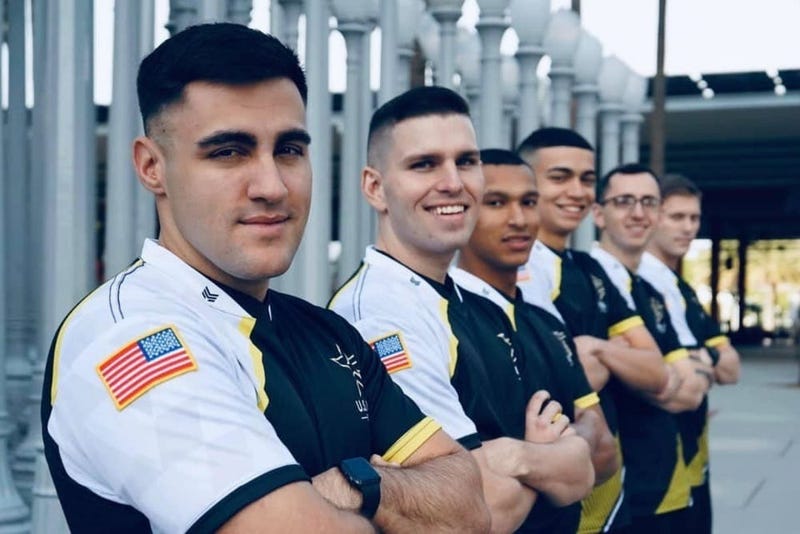 The Army and Navy have eSports teams that engage with users online to help drive recruitment efforts. If you've never heard of it before, eSports is a rapidly growing industry centered around video game players who livestream their games online. Some of those games are played as a part of competitions, and some of them are insanely popular. Most players are streaming their games onto a commercial platform called Twitch.

Twitch has 3.8 million users, plus many more viewers, and is estimated to have made 1.5 billion dollars last year.

With the U.S. military jumping into this virtual arena to try to recruit young people, the military is being confronted in some unexpected ways on issues pertaining to war crimes.

In the chat function on Twitch, users are asking Army and Navy eSports players (who are uniformed service members) about war crimes, PTSD, and other controversial subjects. In response, these users are being banned from channels run by the U.S. military. Certain key words are also being blocked, for example the Navy had blocked the name Eddie Gallagher for a time.

Gallagher was a Navy SEAL who was charged with war crimes in Afghanistan for allegedly murdering a teenage detainee. In a court martial, Gallagher was acquitted for those charges but convicted of taking a trophy photo with the deceased detainee. Contrary to some reporting, Gallagher did not receive a presidential pardon although President Donald Trump did publicly speak out in defense of him on a number of occasions and prevented the Navy from stripping him of his SEAL trident.

The U.S. military says that users asking about Gallagher and other issues about war crimes constitutes trolling, or online harassment. The ACLU calls it, "speaking truth to power" and alleges that the military is violating people's First Amendment rights by blocking users.

All of which raises important questions about the military, how it interacts with privately-owned platforms, and if war crimes cases will impact recruitment.

Twitch provides those who run channels, including the U.S. military, with the functionality to block and ban users. Twitch's terms and conditions state that organizations running a channel there can use those functions as they see fit and are designed to curb online bullying and harassment. The ACLU's claim that doing so violates people's constitutional rights is a tricky one. For starters, the First Amendment only applies to Americans -- it is unclear if the people asking these questions on the Army and Navy Twitch channels are American citizens or not.

The Army has denied that banning such speech from their channel violates anyone's First Amendment rights.

However, the ACLU's claim is not without merit. Last year, an appeals court ruled that Trump had violated the First Amendment by blocking people from his Twitter account that he disagreed with. One of the judges who made the ruling wrote, "the First Amendment does not permit a public official who utilizes a social media account for all manner of official purposes to exclude persons from an otherwise-open online dialogue because they expressed views with which the official disagrees."

What will this mean for Army and Navy eSports teams inundated with questions about war crimes?

While the U.S. military may have been able to paper over and ignore war crimes allegations within their branches of service, they may not find a public that is so easily placated.