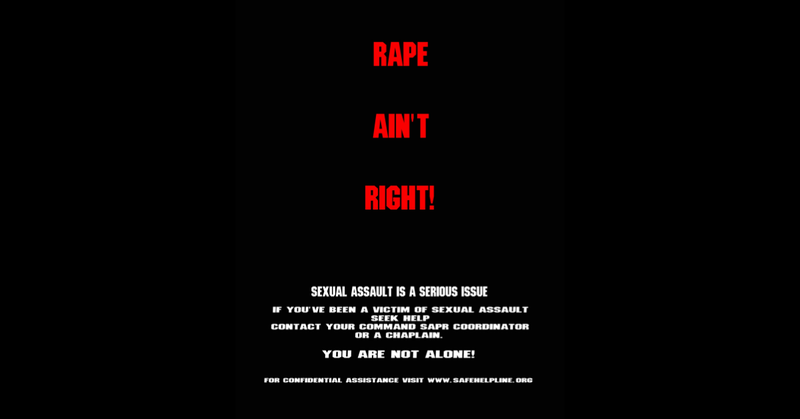 The Department of Defense released its fiscal year 2019 Annual Report on Sexual Assault in the Military on Thursday accompanied by familiar statements about its “ongoing commitment” to advancing a “culture of respect” and its “acute awareness of the high cost of not succeeding.”

The Department of Defense has a culture problem that has persisted for decades.

"I come in [in civilian] clothes in the morning and I've had people say, ‘Well [explicit], I didn't know you had all that.’” -- Navy, Mid-Level Enlisted, Female

The focus groups included 493 DoD-affiliated individuals from every branch and ten different installations.

“I feel like in general, [women] have to deal with sexual harassment more often. I've been sexually harassed in every job I've had thus far, and it's just a fact of life and I've had discussions with men who have said, ‘Oh, well it doesn't happen that often, right?’ No, it has literally happened in every job I've had thus far. I think we're just a lot more aware of it and we are able to identify it more quickly.” -- Air Force, Junior Officer, Female

“Today I bent over to get something. And I didn't know there was anybody behind me. Bent over to grab something really quick and a Sergeant is behind me and said, ‘Oh, don't tempt me.’” — Marine Corps, Junior Enlisted, Female

These cultural problems come from a time when the services were all-male, some focus group participants said. And, even though it’s been decades since this was true, the predominately male environment is part of the reason this culture persists.

“I think it's easier sometimes for us to be like, ‘Oh, well that Marine's from the old Corps. He's been around for a real long time or he just doesn't understand, or he's not used to this. But it's the same thing as us turning around and saying, ‘Boys will be boys.’ Like they're going to do inappropriate things but they're just being silly. No. Assault is assault. Harassment is harassment. And I think there should be more moral courage at the end of the day addressing that.”-- Marine Corps, Junior Officer, Female

The 172 pages weren’t all bad, of course. Leaders are working to set the standards for what behavior is acceptable. Just by holding trainings (even though participants said the trainings were largely boring and unengaging) lower-enlisted service members said they felt that leadership respects them.

But the culture problems persist, they said.

The Air Force -- depending on how you look at it -- either did much better or much worse than any other branch.

When you break the 3 percent overall increase down by branch, the Air Force comes out on top.

The Marine Corps was the only branch that saw a decrease in reported cases -- and a significant one at that. The same questions stand. Were there fewer instances of sexual assault and harassment in the Marine Corps than any other branch? Or are Marines far less comfortable reporting those instances?

It’s not just women. In fact, in the Marine Corps, it’s 20 percent men.

The Corp's statistics show men also are victimized by their fellow service members.

Men make up the vast majority of “subjects,” the report’s term for those accused of sexual assault or harassment. They also make up the majority of individuals who are reported for retaliating against an individual who speaks up about being sexually harassed or assaulted -- whether they were the individual accused or not.

But men also represent significant numbers on the other side of the statistics.

Only 82 individuals total reported facing retaliation -- out of more than 7,000 reports.

We only have part of the picture.

Because of the way the SAPRO publishes its reports, the full context of what sexual assault and harassment looks like within the military is often missing.

SAPRO publishes what it calls “prevalence” reports separately from the type of report that was released this year. The key difference between the two different types of reports is anonymity.

Without a corresponding prevalence report, this year’s report is missing key information.

“This (year’s 3 percent) increase cannot be characterized as an increase in the prevalence of the crime of sexual assault within the military, as an active duty prevalence survey was not conducted in Fiscal Year 2019. Traditionally, the survey is conducted every other year,” the DoD statement accompanying Wednesday’s report reads.

It’s important to collect data on both metrics. The DoD is testing various methods to help service members feel more comfortable reporting instances of sexual assault and harassment -- so it needs to collect data on how many reports are submitted. But without the corresponding data from prevalence reports, it’s difficult to determine what percentage of instances are actually being reported.

So, sure, there was a 3 percent increase in reported sexual assault and harassment. But was that because there were more instances? Or was it because service members feel more comfortable reporting those instances than in previous years?

Despite the vast amounts of data included in the report, more is needed to truly understand if trends in military sexual assault and harassment are changing -- and if they’re changing in the way the DoD wants.