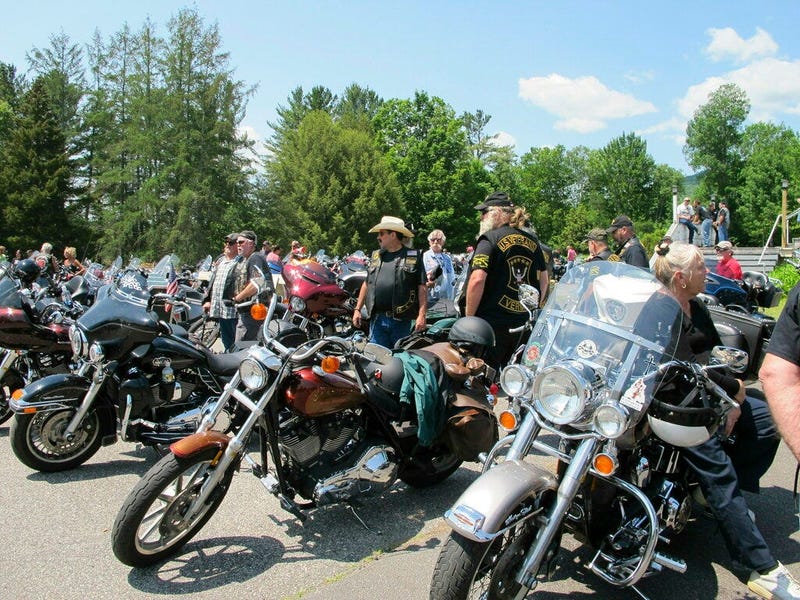 PLYMOUTH, Mass. (AP) — For the bikers killed in a fiery collision in New Hampshire, their funerals Friday will likely be defined by lots of leather, the rumbling of their favorite bikes and plenty of stories about their days with the Jarheads.

Services will be held for Michael Ferazzi, 62, of Contoocook, New Hampshire, and Daniel Pereira, 58, of Riverside, Rhode Island. Visitation will be also held at a Laconia funeral home for Desma Oakes, 42, who died with her boyfriend in the crash.

They are among seven bikers killed last week when a pickup truck hauling a flatbed trailer crashed into the group in Randolph. The pickup driver, Volodymyr Zhukovskyy, 23, pleaded not guilty Tuesday to negligent homicide.

The Jarheads Motorcycle Club, a group of about 80 bikers and their supporters from communities across New England, served as a second family and a refuge for the members, many who got out of the service but still craved the brotherhood they discovered in the Marines.

With a logo that is anchored by the military branch's bulldog, the group serves as a cross between a charity and a social club. Many chapters are housed in American Legion and Veterans of Foreign Wars posts.

"Motorcycle clubs, it's a natural place to gravitate to. Most of us got raw deals, you know, after we got out and it's nice to be able to help out," said George Loring, a Jarheads member who came upon the crash scene minutes after the collision. "You know our families come first. That's number one. God, country, right there. And then the club."

Manny Ribeiro, the Jarheads president, who survived the crash, described a family-oriented group whose members have stuck together through the tragedy and are doing their best to support the victims' families. The group has received donations from Marines around the globe, and veterans are flying in from as far away as the Netherlands for the funerals.

"Right now, these guys have stepped up ... I have a great bunch of guys. I'm proud of them," Ribeiro said. "From the accident to what I saw afterward to what I see now, these guys are just amazing. With the anger and heartbreak and everything we suffered up there, these guys remained composed. ... Without these guys, there is not a chance in hell I could handle this."

Ferazzi was a father of four who served as a Plymouth police officer for 34 years. He served in the Marines for four years, including a stint at in security at the U.S. Embassy in Tokyo. Ribeiro remembered Ferazzi as someone who always had a smile, even as recently battled cancer.

His funeral will be in Plymouth, Massachusetts.

"He was happy to be with us, and he loved life," Ribeiro said. "I remember when he came in Friday. He had a big smile on his face. He was leading the pack from New Hampshire. He was just one of those guys who was genuine and funny."

Known as Danny Boy, Pereira joined the Marines after his 18th birthday and, according to his obituary, it was an experience that defined his life. A father of two, Pereira worked for the Narragansett Bay Commission.

Friends said Pereira, active in a gun club and an Italian club, was easygoing and would do anything to help someone in need especially fellow veterans. His funeral will held Friday in Providence, Rhode Island.

Oakes, of Concord, who lost her husband and young son in the past decade to lung cancer, was killed in the crash, along with her boyfriend Aaron Perry, 45, of Farmington, New Hampshire, according to the Concord Monitor.

Visitation will be held Friday in Laconia for Oakes, followed by a celebration of life Saturday at the Hanover Inn in Hanover.