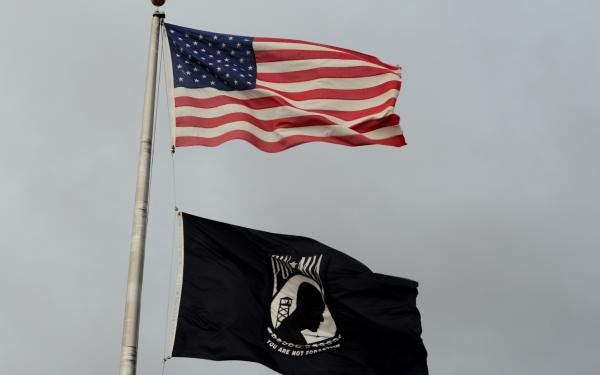 A bill that would require the POW/MIA flag be flown with the American flag is poised to become law.

The Senate unanimously passed the bill from Senators Elizabeth Warren, D-Mass. and Tom Cotton, R-Ark. in May and earlier this week, the House did the same for the companion bill from Rep. Jack Bergman, R-Mich. and Rep. Chris Pappas, D-N.H. The bill now moves to the president's desk for his signature before it becomes a law.

The bill specifically would require the POW/MIA flag to be displayed with the American flag at certain federal buildings and memorials to honor the more than 81,000 service members still unaccounted for from conflicts since World War II.

The bill awaiting President Donald Trump's signature requires the flag be displayed whenever the American flag is flown.

“The POW/MIA Flag is representative of profound courage and sacrifice," Pappas said in a statement. “By proudly displaying this symbol outside of our federal buildings, memorials and national cemeteries, we are reaffirming our commitment to those service members and their families who have sacrificed beyond measure. I will continue to support policies that provide for the return of the remains of our fallen heroes and to support the Department of Defense with the necessary resources to properly identify those who are returned home."