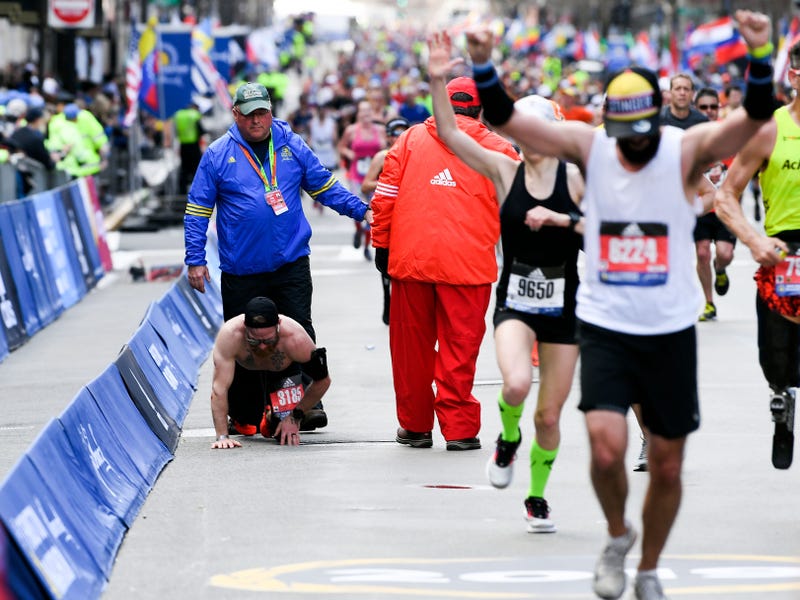 Micah Herndon was not willing to quit. Even if it meant crawling the last few feet of the Boston Marathon on his hands and knees, inches at a time. He had someone to fight for.

Several other veterans competed in the Boston Marathon on Tuesday, all determined to finish their mission.

The 26-mile Boston Marathon can be grueling for some. But Micah Herndon was willing to do whatever it took to cross the finish line.

Herndon, a former lead machine-gunner in the Marine Corps’ “Lava Dogs” division, was running to honor Marines he served with who died in Afghanistan in 2010, the Ohio Record-Courier first reported. Marines Mark Juarez and Matthew Ballard, and British journalist, Rupert Hamer, died in an IED explosion.

“I run in honor of them,” Herndon told the Record-Courier. “They are not here anymore. I am here, and I am able. I am lucky to still have all my limbs. I can still be active. I find fuel in the simple idea that I can run. Some cannot.

“If I get a heat cramp while running or my feet hurt or I am getting exhausted, I just keep saying their names out loud to myself. They went through much worse, so I run for them and their families.”

Herndon finished with a time of 3 hours and 38 minutes.

In a photo posted to Facebook, Herndon shared the gold plates engraved with the names of his fallen comrades woven onto the laces of his bright orange running shoes.

How badly do you want it? #BostonMarathon pic.twitter.com/EYo7liqM5Q

It's incredible to watch the field of marathon runners. Micah Herndon from Ohio crawls the final few feet to the #BostonMarathon finish line. #Boston2019 pic.twitter.com/S6qfqAJX3o

RELATED: Double-Amputee Army Ranger wants fellow veterans to 'get back on the horse'

The four crossed the finish holding an American flag with King carrying the Enduring Warrior flag.

sports
Adam Silver apologizes to Raptors exec for blaming him for run-in with sheriff's deputy
music
What's the health status of Lady Gaga's dog walker after shooting and stolen French bulldogs?
music
Kanye West reportedly spent $12 million of his own money on Presidential campaign
sports
Chris Sale wants to retire as a Red Sox: 'I have nowhere else to be'
music
RADIO.COM presents '90's Country’ with Kelly Ford every Sunday
news
Rush Limbaugh laid to rest in St. Louis