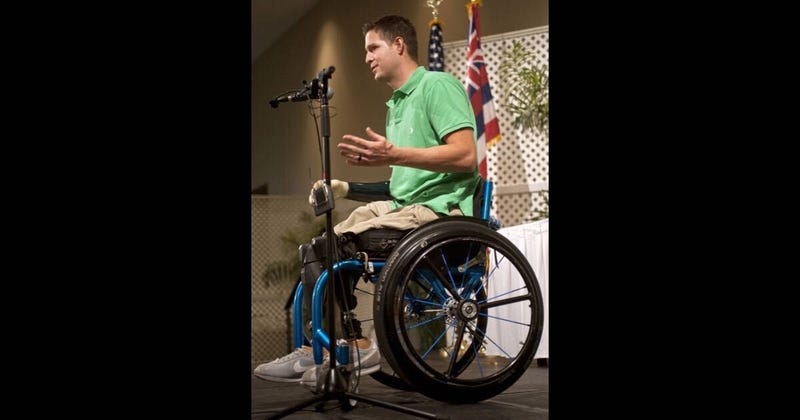 Iraq war veteran Brian Kolfage was arrested Thursday, along with former Trump administration strategist Steve Bannon and two others, accused of misusing money raised through their "We Build the Wall" GoFundMe campaign that raised more than $25 million.

A federal indictment released Thursday details accusations against the men, including allegations of exactly how they spent the money they raised.

Kolfage, for example, is accused of using some of the money for payments on a boat and a Range Rover SUV. A boat is listed among property from the men to be seized by the federal government, a 41-foot 2018 Jupiter boat named "Warfighter," which Kolfage shows off on his Instagram page. The four-motor boat also has it's own Instagram page, and the description on the account includes the boat's specs, homeport and a line that reads "Combat Vet- Purple Heart Recipient."

Federal prosecutors said Bannon and Kolfage repeatedly told the public that the Air Force veteran would "not take a penny in salary or compensation" for the wall fundraiser and that "100% of the funds raised ... will be used in the execution of our mission and purpose" because, as Bannon said, "we're a volunteer organization."

Kolfage's Instagram account shows the Warfighter in a July 4 boat parade honoring President Donald Trump in Destin, Florida. The boat, like others in the video, flys a large Trump campaign flag. Online boat resellers value similar size, year, make and model boats at more than half a million to more than $1.2 million.

Kolfage, the indictment says, "covertly took" more than $350,000 in donated funds for personal use, and Bannon, through a nonprofit under his control, received more than $1 million of the fundraised money which he used, in part, to "secretly pay Kolfage."

Kolfage allegedly used the money on home renovations, payments on a luxury SUV, a golf cart, jewelry, cosmetic surgery, personal tax payments and credit card debt, along with the boat.

The men used a shell company and Bannon's nonprofit to divert money away from the fundraiser for the wall while keeping the arrangement "secret," "confidential," and on a "need to know" basis, according to the indictment, which cited alleged text messages between the men.

Kolfage went so far as to send mass emails to donors asking them to purchase coffee from his unrelated business, telling donors the coffee company was the only way "he keeps his family fed and a roof over their head" because he was taking "no compensation" from the fundraiser, the indictment says.

When donors wrote to Kolfage to tell him they did not have a lot of money and were trusting him with what they donated, he allegedly assured them he was not being compensated for his work on the fundraiser, according to the indictment, which cited private messages between Kolfage and donors.

The men agreed, however, to allegedly pay Kolfage and his spouse $100,000 upfront, then $20,000 per month for his work, through the nonprofit, shell companies and other secret means, though Kolfage did not work for that nonprofit or those companies and the money he was paid came from the fundraiser, the indictment says, citing text messages between the men that outlined the scam.

Kolfage and the other men are accused of conspiring with each other to commit wire fraud, and money laundering, among other allegations.

The indictment directs the men to forget to the federal government any and all property connected to their alleged crimes, including the contents of bank accounts, along with Kolfage's boat and 2018 Range Rover SUV.

The men face up to 20 years in prison if convicted.—
Reach Abbie Bennett: abbie@connectingvets.com or @AbbieRBennett.
Want to get more connected to the stories and resources Connecting Vets has to offer? Click here to sign up for our weekly newsletter.