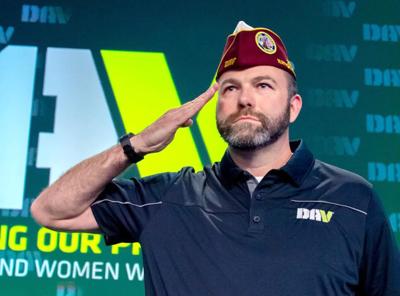 When Stephen “Butch” Whitehead was a soldier in Iraq, he said you could smell the burn pit near Camp Scania throughout the base.

The U.S. military used the giant burning hole in the ground to destroy tires, batteries, medical and human waste and more. All of it was doused with fuel and set ablaze, sending smoke and fumes streaming through the air.

When Whitehead returned home, he and other soldiers he served with developed multiple health issues they attribute to their exposure.

On Tuesday, Whitehead, now national commander of Disabled American Veterans (DAV) told Congress it must tackle the effects of burn pits, along with VA oversight, women veterans’ care and suicide prevention, among other priorities.

One million members strong,  DAV told members of Congress its mission to represent and advocate for veterans injured or sickened during wartime service hasn’t changed. And they brought some of those 1 million with them to fill the entire hearing room -- and then some -- to prove it.

“A century ago, President Calvin Coolidge warned that ‘the nation that forgets its defenders will itself be forgotten.’ I am here today to help make sure that never happens,” Whitehead told lawmakers Tuesday.

At the top of DAV’s agenda was ensuring care and benefits for veterans exposed to toxins during service, including burn pits and Agent Orange.

“There are still too many veterans, particularly Vietnam veterans, waiting for their toxic exposure to be recognized,” Whitehead said, pushing lawmakers to pass the Keeping Our Promises Act, which would require VA to cover four additional diseases linked to Agent Orange. “These veterans and their families have suffered for years and should not have to wait any longer.”

VA estimates as many as 3.5 million veterans may have been exposed to toxins from burn pits since 2001. They also were used in Desert Storm and Desert Shield. Whitehead told lawmakers how personal the issue is for him.

“I was based at Camp Scania in Iraq, which had a major burn pit just a mile away. I personally took several trips to this burn pit, where everything from tires and batteries to medical and human waste was burned. Since my return from Iraq, I have had a number of new medical challenges — including respiratory, cardiovascular and thyroid issues — as did a number of my fellow soldiers.”

DAV called on Congress to include all veterans -- from all eras and conflicts -- who served in areas with burn pits in any future legislation to address their exposures.

For more than 10 years, 2007-18, VA received more than 11,000 claims for service-connected disabilities related to burn pit exposure. The department denied 80 percent of them.

Part of the problem is spotty -- or nonexistent -- Pentagon records showing where troops were and whether they were exposed to burn pits and other toxins. So DAV is asking Congress to require VA to concede that veterans may have been exposed, and not put a high burden of proof on individual vets in order to begin claims processes. A bill in the Senate, the veterans Burn Pits Exposure Recognition Act, aims to do just that.

“If VA will not take the right action, you must,” Whitehead said, to applause.

To meet veterans’ increasing need for care, lawmakers approved the MISSION Act, which replaced the expiring Choice Act last June. The legislation was intended to expand care for veterans, including more opportunities for veterans to receive care from VA’s network of private providers.

But DAV said it and other VSOs are concerned about MISSION’s implementation. They say VA lacks transparency and isn’t keeping promises to work together.

Perhaps most concerning, Whitehead said VA may not be meeting the requirement to hold those private providers to the same standard as VA medical staff.

“VA chose not to require the same quality standards for non-VA providers,” he said.

Women veterans’ use of VA health care increased 175 percent from 2000 to 2015, and women are the fastest-growing group in the veteran community.

But DAV said more work must be done to address existing gaps in care and barriers women veterans often experience, including a lack of providers who have expertise in women’s health and training networked providers in how to care for women vets.

DAV called on the Senate to pass the Deborah Sampson Act, an omnibus piece of legislation covering a swathe of women veterans’ care. That bill passed the House last year.

VA, lawmakers and VSOs all agree -- with a rate of 20 veterans dying by suicide daily, preventing those deaths must be the No. 1 priority.

In the past 20 years, the number of veterans using mental health and substance use programs has grown at triple the rate of those using primary care. But though Congress, VA and advocates have poured more and more money into more efforts to prevent suicide, the number of deaths has only worsened.

DAV encouraged VA and lawmakers to continue to promote available mental health help and continue to increase the number of qualified mental health professionals, of which there is an increasing shortage at VA and in civilian health care.