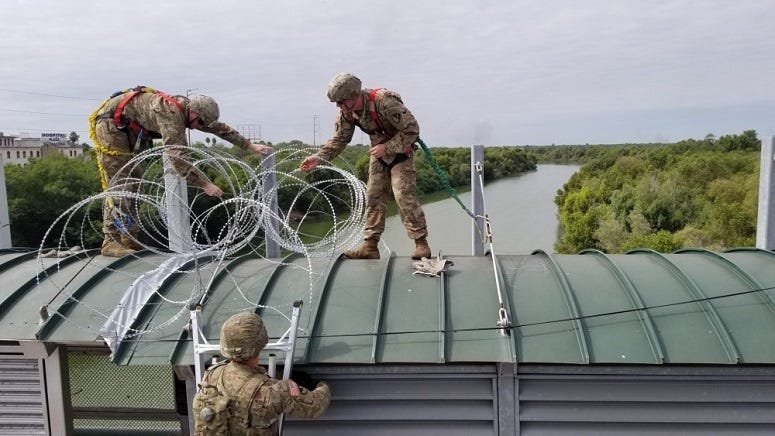 When the Pentagon answered a request from the Department of Homeland Security and the White House last September to send troops to the southern border with Mexico, it sent active-duty troops.

Now, as some active-duty forces can expect to be there well into 2019, lawmakers want to know why they were used and not National Guard or Reserve units.

House Armed Services Committee Chairman Adam Smith (D-Wash.) said during a hearing on Tuesday focusing on the border mission that the use of active-duty troops—opposed to National Guard forces—“caught the attention of the committee” and went so far as to call the situation at the border a “perceived crisis.”

The Defense Department initially sent 5,900 active-duty troops from units based in the continental US, but that number has shrunk considerably since last fall, and today, some 2,300 troops are there. Under Secretary of Defense for Policy, John Rood told the House panel that additional deployments would continue through September 2019.

The hearing fell along party lines with Republicans defending a robust military presence along the border, Rep. Mac Thornberry (R-Texas), the committee’s ranking member, suggesting that the deployments are “in-line and consistent with the sorts of things we’ve asked the military to do for a long, long time.”

Pentagon officials pointed out that forces currently there are providing construction, such as putting up concertina wire, intelligence, aviation, and logistical support. Vice Adm. Michael Gilday, director of operations for the Joint Staff, said that military personnel set in place 70-miles of concertina wire so far, which “allowed (US Customs and Border Protection), we believe, to spread their manpower between points of entry.”

However, Smith and other Democrats on the committee questioned why contrary to what has been done in the past National Guard units were not selected. Specifically, they worried about the effect the deployment has on overall unit readiness.

RELATED: Trump calls for 'steel barrier' as a solution to a 'crisis of the heart and soul'

Thornberry defended the Department and administration saying when these decisions were made last fall, there were thousands of migrants from Central America “massing” and officials wanted forces that could deploy at a moment’s notice.

The caravan of immigrants was estimated to be near 10,000, but by the time they reached the US border, the numbers dwindled, and immigrants were dealt with by border security at legal points of entry.

Gilday added that the first units arrived at the border a week after the request was made.

Still, questions were raised about how the ongoing deployments to the border impact the Pentagon’s other priorities. The units there are rotated out every six to eight weeks, and Gilday said several have already missed or will miss some lower-level training opportunities.

“But we believe we can replace that,” he said.