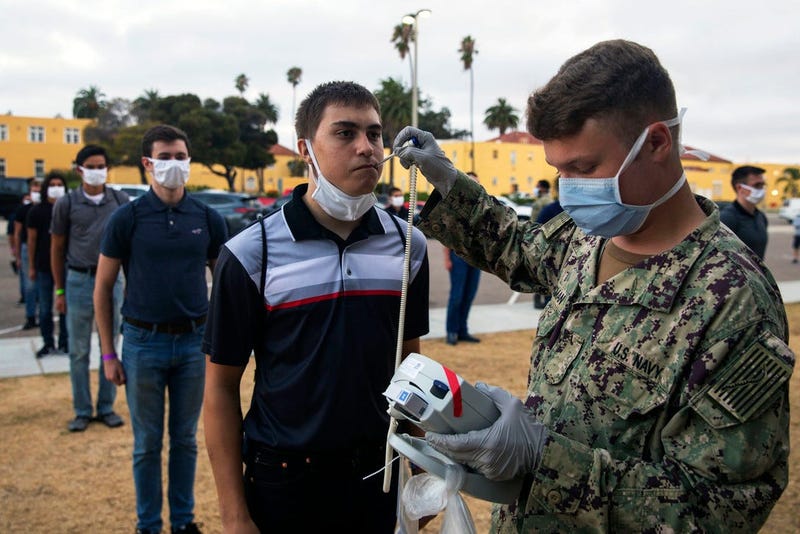 For all age demographics but one, the Department of Defense has reported lower rates of COVID-19 infection than the corresponding age demographic in the civilian population. That one age group with a higher rate of infection is the one that comprises most of the military -- those 18 to 24 years old.

The Department of Defense is largely unconcerned by these rates, however, for a number of reasons.

Maj. Gen. Lee Payne, Defense Health Agency assistant director for Combat Support and Brig. Gen. Paul Friedrichs, medical advisor to the DoD Coronavirus Task Force explained at a press briefing on Thursday that the military is testing this age group in a way that the civilian population is not.

"We believe that the slightly-increased confirmed case rate in that age group is a result of the success of General Payne and his testing task force and the services, and allowing us to test at the entry to basic training, at the exit to basic training and at many other points in an active-duty service member's career," Friedrichs explained.

While the civilian 18 to 24-year-old population is largely only conducting COVID-19 tests in the case of symptomatic patients or those with other medical purposes, the DoD is testing large groups of 18 to 24-year-olds at various points throughout basic trainings, for predeployment purposes, and in the interest of overall operationality. For those with operational needs, the DoD is now conducting up to 60,000 COVID-19 tests per week.

In addition to ensuring operationality, testing large swaths of individuals regardless of symptoms is also allowing the DoD to screen larger populations and contain the virus as it spreads -- both within the DoD and within the community.

"In essence, it's screening the population so we are finding people that don't know they have the disease, we're isolating them, we're doing contact tracing on those folks and they live in the community," Payne said. "We're doing that screening for mission readiness, but it also has the added benefit, the fact of reducing disease in the population."

The infection rate across the entire active-duty component is around 5.3 percent, Payne and Friedrichs reported. The general United States population, according to the Centers for Disease Prevention and Control, has a roughly 8.6 percent COVID-19 infection rate.

Payne and Friedrichs also said they have not identified any clusters or virus hotspots other than those that align with the trends within the general population -- as states like Texas and California experience spikes in COVID-19 cases, the military installations in those states are as well.

"Many of our service members and their families live off base," Friedrichs said. "And so if you look at Texas or Florida or California, or earlier in this outbreak in New York or Washington, we absolutely did see increases that mirrored what was happening in the community."

As of Friday, the DoD had reported a total of 39,591 COVID-19 cases across the entire force. This includes 66 deaths, the majority of which are among the civilian DoD population.