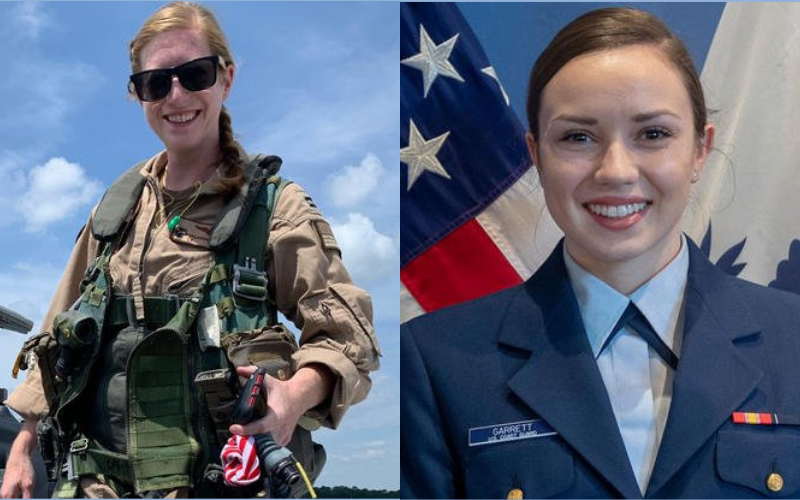 The Department of Defense identified the two aviators killed over the weekend in a training flight accident as Navy Lt. Rhiannon Ross and Coast Guard Ensign Morgan Garrett.

Garrett, 24, was conducting a training flight with her instructor, Ross, 30, when the T-6B Texan II crashed in Foley, Alabama, Friday evening. The pair took off from Naval Air Station Whiting Field, Milton, Florida, on a routine training flight and flew roughly 30 miles before crashing. While the aircraft crashed in a residential area, no injuries were reported on the ground.

"Our thoughts and prayers are with the families and loved ones of Lt. Rhiannon Ross and U.S. Coast Guard Ensign Morgan Garrett. RIP Shipmates. We have the watch," Chief of Naval Operations Adm. Mike Gilday said in a statement Sunday night.

Garrett graduated from the Coast Guard Academy in 2019 where she majored in Marine and Environmental Sciences and ran track. Ross commissioned in 2012 from the University of Michigan at Ann Arbor's Navy Reserve Officer Training Corps.

The crash comes just days after a Navy fighter jet crashed in the Mojave Desert. Its pilot safely ejected, the Navy said. The F/A-18E Super Hornet from Naval Air Station Lemoore in California's Central Valley went down during another routine training mission.

While this is the Navy's first fatal crash in over a year, training accidents across the force have been on the rise and under significant scrutiny for years.

Across the Department of Defense, from 2006 to 2020, 5,605 service members were killed in training accidents. This represents 32% of all reported active-duty military deaths for that time period and is double the percentage of troops killed in action.

Sign up for the Connecting Vets newsletter to get more of the stories and resources we have to offer.