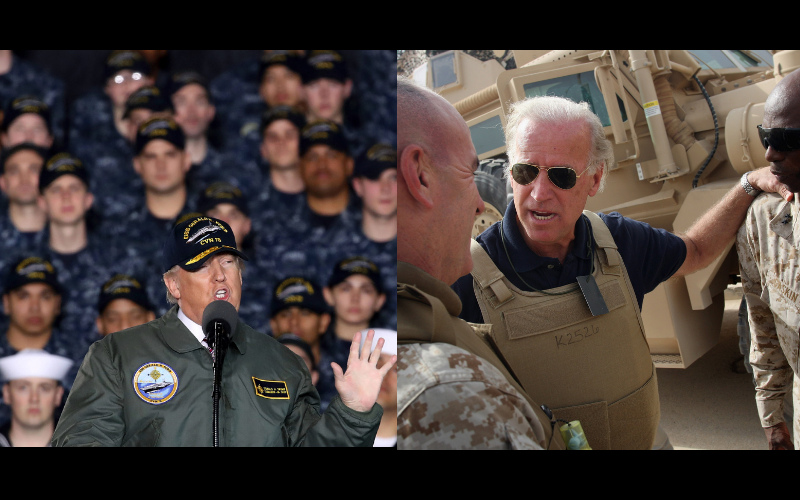 The two presidential candidates are nearly neck-and-neck when it comes to support from military personnel. Depending on which recent poll you trust more, either Joe Biden leads by 4% or Donald Trump leads by 10%.

But where does each candidate stand on key issues concerning national security and military personnel?

END THE “ENDLESS WARS” IN THE MIDDLE EASTTrump: YesBiden: YesBoth Trump and Biden have said they would bring U.S. troops home from Iraq and Afghanistan where they have been engaged in the “endless wars” of the Middle East for more than two decades. During his administration, Trump pursued and initiated the beginning of this process through his “peace talks” with the Taliban. Biden’s foreign policy similarly includes provisions for bringing U.S. troops home and refocusing efforts in the Middle East on Al-Qaeda and ISIS. Biden voted in favor of authorizing the Iraq War but has since said his support was “bad judgment.”

CHINA IS ONE OF THE MOST PROMINENT FOREIGN THREATSTrump: YesBiden: YesChina is considered the “common ground” between Trump and Biden when it comes to military policy. Trump and Biden both identified China as a “distinct,” “immediate,” “ever-increasing” threat to national security. Both the president and the former vice president believe China’s trade practices are manipulative and abusive. However, Trump largely blames China for the ongoing COVID-19 pandemic and continues to insist it be held accountable. Biden has not prescribed to this line of thinking but has voiced concern over human rights issues in the country and has vowed to “get tough” with China. Both have said continued aggressive policy decisions against China are necessary and “innovative technology” over expensive “traditional weapons systems” is the way to go.

CONFEDERATE SYMBOLS ARE ALLOWED AND TRANSGENDER TROOPS ARE NOTTrump: YesBiden: NoWhile Trump and Biden converge on issues such as ending the war in the Middle East and the threat of China, they differ when it comes to social issues such as renaming military installations that carry the names of Confederate leaders and allowing transgender troops to openly serve in the military under their preferred gender. Trump has repeatedly said he does not intend to change the names of installations like Fort Benning and Fort Bragg. He also banned transgender troops from service in April 2019. If elected, Biden would likely reverse the ban on transgender troops and has said he supports changing the names of the ten installations with Confederate namesakes to something that more aptly reflects “the country’s diverse heritage and leadership.”

CONTINUE INCREASING DEFENSE BUDGETTrump: YesBiden: NoAccording to the Trump campaign, the current president is responsible for the “largest-ever investment” in the United States military including funding for the Space Force, a pay raise for military personnel, and an expansion of America’s nuclear capabilities. If re-elected, he plans to continue with these large investments. Biden, on the other hand, said we need to “rethink” what we invest money in moving forward. Biden says Trump has “abandoned all fiscal discipline when it comes to defense spending” and the U.S. needs to be investing in systems and products that will modernize the country’s military. “Too much is being invested in legacy capabilities that are outdated, expensive to sustain, and which won’t be effective in the future,” Biden wrote in response to the Military Officers Association of America.

RUSSIA IS NOT A PROMINENT THREAT TO NATIONAL SECURITYTrump: YesBiden: NoBiden often mentions Russia in conjunction with China when discussing threats to national security -- Trump does not. The former vice president has warned that Russian President Vladimir Putin is “assaulting the foundations of Western democracy” while Trump has maintained a “cordial” relationship with Putin despite criticism over reports that Russia allegedly plotted with the Taliban to kill U.S. troops.

RETURN TO THE IRAN NUCLEAR DEALTrump: NoBiden: YesAs vice president, Biden supported the Obama administration’s nuclear deal with Iran -- and said as much when Trump withdrew from it. If elected Biden, would likely return to negotiations with Iran and reenact the deal if Iran was willing to comply with the 2015 agreement. Political analysts have said that Biden’s years of engagement in U.S. diplomacy in the Middle East as both a senator and a vice president make him a strong candidate for reestablishing the deal if he so chooses. Trump, of course, stands by his decision to withdraw the U.S. from the pact, citing Iran’s violation of the deal’s restrictions and has said that we are “working with our Middle Eastern allies to ensure Iran does not develop a deliverable nuclear weapon which would destabilize the Middle East.”