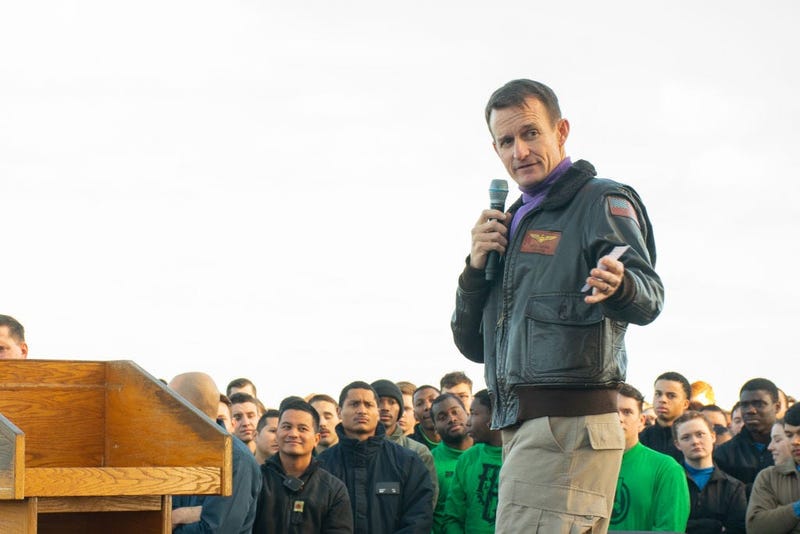 Former USS Theodore Roosevelt Captain Brett Crozier did not "do enough soon enough" to protect his crew from the coronavirus, Pentagon leaders said Friday after announcing the captain would not be reinstated.

“I will not reassign Capt. Brett Crozier as the commanding officer of the USS Theodore Roosevelt, nor will he be eligible for future command. Capt. Crozier will be reassigned," Secretary of the Navy Kenneth Braithwaite said during a press briefing at the Pentagon Friday.

Chief of Naval Operations Adm. Mike Gilday explained that Crozier made decisions early on in the USS TR's outbreak that prioritized "comfort" over safety that put his crew in unnecessary danger -- lifting quarantine measures among the crew prematurely, not using available resources appropriately, and failing to communicate properly up the chain of command. Gilday said Crozier did not "do enough soon enough" to protect his crew.

Former Acting Secretary of the Navy Thomas Modly dismissed Crozier from his position April 2 after a four-page letter written by Crozier leaked to the media. The letter was a desperate plea for help in the fight against a coronavirus outbreak onboard the carrier.

When asked about the discrepancy between the lack of action on Crozier's part described by Navy leadership and the urgency of Crozier's leaked email, Gilday repeatedly answered that this most recent investigation was not about the leaked email or the attached letter.

In a bizarre twist, Modly flew to the USS TR after dismissing Crozier to defend his decision to do so. The speech Modly delivered to the crew over the TR's speaker system was similarly leaked. Modly called Crozier "too stupid" to his former crew. After his speech leaked, Modly apologized and resigned.

Meanwhile, COVID-19 continued to spread rapidly through the USS TR's crew. The carrier was forced to dock in Guam, the U.S. was forced to negotiate with the island's leadership to reach an agreement on housing the majority of the ship's crew on land while the outbreak was mitigated, and 1,273 sailors eventually tested positive. One of the Department of Defense's three total COVID-related active-duty deaths is USS TR crewmember Aviation Ordnanceman Chief Petty Officer Charles Robert Thacker Jr.

An investigation into the handling of the outbreak on the USS TR was launched shortly after. The initial results of that investigation were returned by the end of April -- with recommendations that Crozier be reinstated as the USS TR's commander.

However, Acting Secretary of the Navy James McPherson responded to those initial results by asking for a "deeper" review.

"After carefully reviewing the preliminary inquiry into the events surrounding the COVID-19 outbreak aboard USS Theodore Roosevelt (CVN 71), the Chief of Naval Operations, Adm. Mike Gilday, provided me with his recommendations," McPherson said in a statement at the time. "Following our discussion, I have unanswered questions that the preliminary inquiry has identified and that can only be answered by a deeper review."

Now, Gilday says if he knew then what he knows now he would never have recommended Crozier be reinstated -- and if Crozier were still in command today, Gilday would move for his dismissal. Braithwaite similarly said that he believed "emotions" and efforts to make a quick decision were factors in the initial incorrect recommendation to reinstate Crozier.