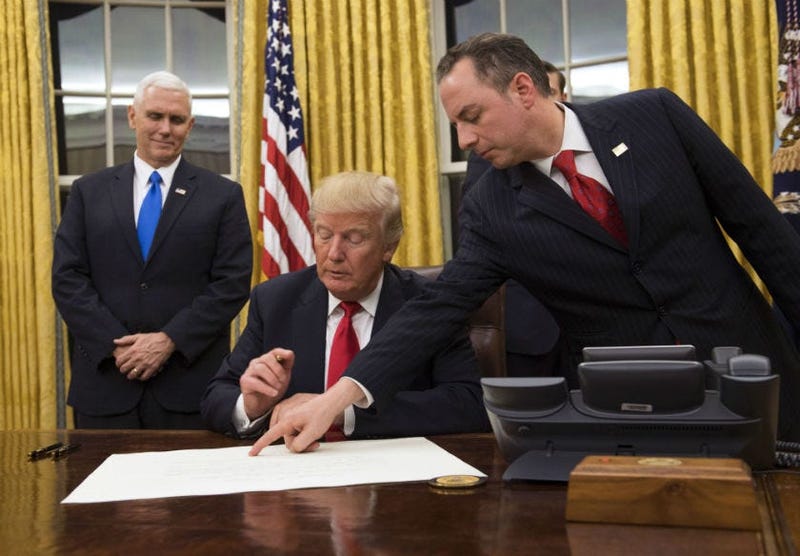 Reince Priebus, former White House chief of staff for President Donald Trump and the former chairman of the Republican National Committee, was commissioned as an officer in the U.S. Navy Monday in a ceremony led by Vice President Mike Pence.

Priebus, 47, was commissioned as an ensign after a months-long application process which included a recommendation from former Defense Secretary Jim Mattis and required the approval of a Navy review board.

Congratulations to the #Navy’s newest Ensign @reince. Great to join @vp @mikepence @RonJohnsonWI and others as he was sworn in pic.twitter.com/oDgwS8513w

The Washington Post reported about Priebus' desire to join the Navy in December when the paper obtained a statement he wrote in which he said his desire to serve came from an Oval Office meeting with the family of Senior Chief Petty Officer William “Ryan” Owens, a Navy SEAL who was killed during a Special Operations raid in Yemen in Jan. 2017.

“At that moment, the gravity of every action we take in the West Wing rushed down upon my shoulders,” Priebus wrote. “Everything suddenly became extremely real and raw. As some time passed, a few other senior aides joined me in the Cabinet Room and we discussed the consequences, harsh realities and weight of what we do every day.”

Priebus also said he proudly watched his sister serve as a Navy doctor and remembered his father teaching at Naval Station Great Lakes when he was a child.

The former Trump Administration staffer was among five members selected in December by a Navy review board which examined 42 candidates to join the service through a direct-commission program for human resources officers, The Post reported. Anyone over the age of 42 requires a waiver to join as an officer and must sign an agreement acknowledging potential limitations on their career.

In his recommendation, Mattis, who was at the time serving as Secretary of Defense, wrote that “Reince’s experience, education, and personality make him an ideal fit to be commissioned into the Navy Reserve.”

"He has yet to receive an official assignment," Gabos said. "In the near future he will attend Officer Development School (ODS) in Newport, Rhode Island where he will receive an introduction to military structure, the history of Navy traditions and customs, the military legal system, military etiquette and more.”

It was an honor and privilege to attend @Reince’s naval commissioning ceremony this morning. Congratulations and thank you for your service Ensign Priebus!!! pic.twitter.com/ZYSFJXlMfr

It was great to be at the commissioning ceremony of Kenosha native @Reince. Today @VP Pence swore him in as an Ensign in the United States Navy! Congrats, Reince! pic.twitter.com/r5GsTRZFuG