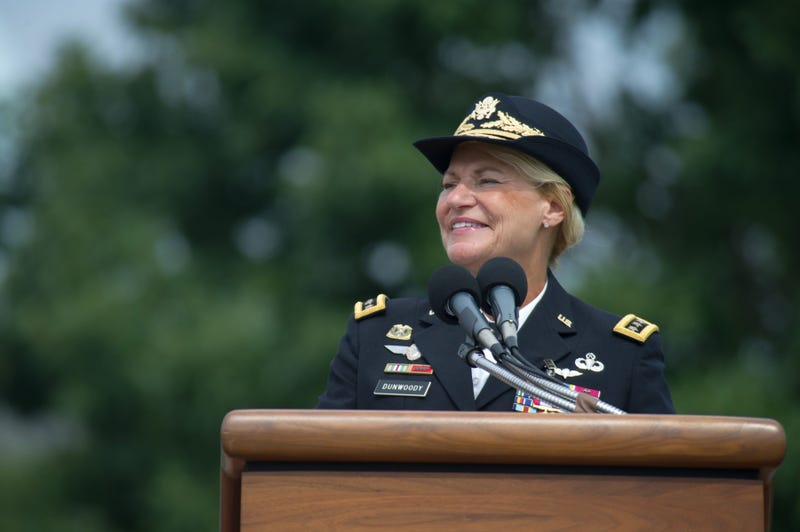 Retired General Ann E. Dunwoody, the first female four-star general, received the Association of Graduates Thayer Award Thursday, Oct. 10 at the U.S. Military Academy at West Point in New York. The award is the highest honor a nongraduate can receive. It was presented by Lt. Gen. Darryl Williams, superintendent of the academy, and the ceremony was followed by a parade in Dunwoody's honor.

Four generations of Dunwoody's family attended West Point — her brother, father, grandfather, and great grandfather. And, while Dunwoody originally decided to break the mold and pursue a career as a physical educator, she has found herself back on the campus where her male relatives became officers time and time again — this time as a Thayer Award recipient.

“With four generations of West Point graduates in my family, I am especially proud that I will have the privilege of trooping the line, and the opportunity to salute the men and women of the Corps of Cadets who will lead and inspire our future Army,” Dunwoody said in a statement released by West Point.

Dunwoody joined the Army in 1974 as a second lieutenant in the Women's Army Corps and went on to break barrier after barrier throughout her 37-year career. She was the first woman to command a battalion in the 82nd Airborne Division, the first female general officer at Fort Bragg in North Carolina, and the first woman to command the Combined Arms Support Command at Fort Lee in Virginia.

She also deployed overseas for Operation Desert Shield/Desert Storm and deployed the Logistics Task Force in support of Operation Enduring Freedom I. In her last assignment, Dunwoody led the largest global logistics command in the Army, Army Material Command.

"It wasn't because you were a woman, it was because you were a brilliant, dedicated officer, and you were quite simply the best logistician the Army has ever had," then-Chief of Staff of the Army Gen. Ray Odierno said at Dunwoody's retirement.  "You have set the shining example for all Soldiers, especially our young leaders."

The Thayer Award, which was named for Col. Sylvanus Thayer who was superintendent from 1817 to 1833, is presented by West Point's Association of Graduates to those whose service reflects the academy's motto — "Duty, Honor, Country." Other recipients include Dwight D. Eisenhower, Bob Hope, and Tom Brokaw.