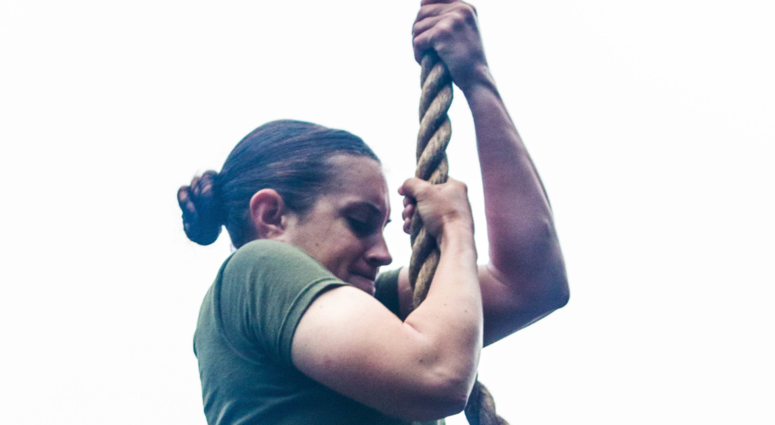 "After you take off the uniform, your identity kind of goes with it and so does that camaraderie. We want to make sure that we create an environment where women veterans can connect and reidentify who she is while also connecting with other women veterans," said Mea Williams, president and CEO of Grace After Fire.

Based in Houston, Texas, Grace After Fire provides tools and resources to help women veterans thrive after service.

"Without Grace After Fire I wouldn't be where I am today," said Marine Corps veteran Jen Cannon. "Nothing is perfect right now. I still go through struggles. But every step of the way they've always been that continuity of being a step up or crutch."

Cannon was sexually assaulted in 1999 — her first year in the Marine Corps. To make matters worse, her assaulter was her husband at the time.

"So I lived with this secret for a good 20 years," Cannon said.

After her divorce, Cannon found herself in the Houston area — in need of help.

"If a woman veteran is homeless we connect them with housing resources. If they are unemployed we connect them with employers," Williams said. "The newest program we provide is our financial basic needs assistance program because 90 percent of our calls are from women veterans in need of some kind of financial assistance whether they lost their job or they're in between jobs or a tragedy has hit like Hurricane Harvey."

In most cases, Grace After Fire can help women veterans pay their bills, mortgage, or rent — or gas cards to make it to the job interview that could turn a woman veteran's entire life around.

"We'll call her Megan for anonymity sake, but she was living in her car with her two children, unemployed. She had just quit using drugs and drinking alcohol, and she came to Grace After Fire looking for gas cards so she could get to a job interview the following week," Williams said. "Grace After Fire got on the phone, connected her with several organizations. Today she's employed and she has a home for herself and her children."

Women veterans from all sorts of life situations come to Grace After Fire.

Regardless of conflict or background, however, Grace After Fire gives women veterans a place to connect.

"I felt like I finally found a place where I could relate," Cannon said. "With Grace After Fire I always felt like I fit in. I don't know if that was because of all the female presence or because of their small-detailed scope of woman veterans and especially those dealing with MST."

"We believe at Grace After Fire that the first step to healing is to talk about it and we give women veterans a safe place to do that by providing this curriculum," Williams said. "The peer-to-peer support program is a weekly group where women veterans come into a small room with about ten other women veterans and have conversations about topics like grief and loss to emotional intelligence to time management."

And Grace After Fire's operation is run by all military-connected women.

"We're one of five woman veteran organizations," Williams said. "And we are all women who have served in one capacity or another. So when women veterans call us, she gets connected with another woman who served. There's a powerful thing that happens whenever veterans talk to veterans."

To learn more about Grace After Fire click here.