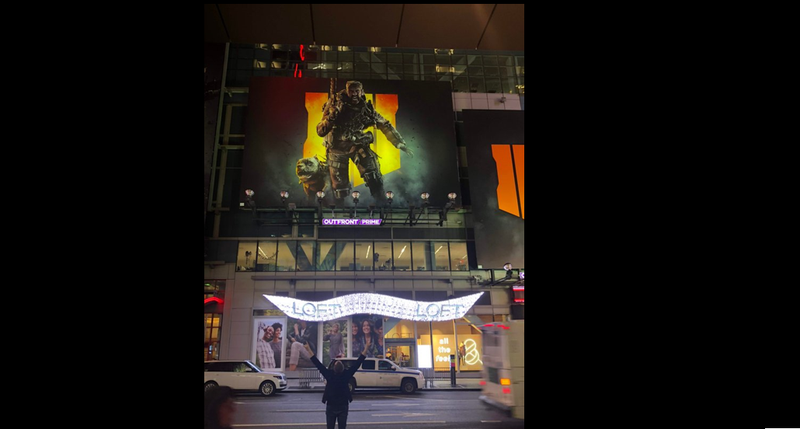 Former Army Green Beret medic turned actor, Jeff Bosley, says you’ve made it big when a picture of yourself as a video game character makes it onto a giant billboard in New York’s Times Square.

Among other military-style acting roles, Bosley, who was born in Colorado but grew up in Pocatello, recently had his physical appearance applied to the video game character Tavo “Nomad” Rojas from Treyarch’s “Call of Duty: Black Ops 4.”

Within days of the game’s Oct. 12, 2018, release, Bosley started receiving emails from fans that included images of Nomad, which were essentially digital versions of Bosley, on various marketing materials for the game including billboards, posters and actual gameplay depictions.

“I took this job as if it were just some type of advertising campaign,” Bosley said. “But the next thing I know, I had these fans sending me images of me as Nomad both on little posters and billboards from around the world and from actual gameplay.

“The icing on the cake was someone sharing with me an image of my mug in Times Square, and not just this small poster, but this huge display.”

In terms of gameplay, Nomad’s special equipment is a “Mesh Mine,” which allows players to deploy explosive traps that connect to create intricate lethal tripwire systems. Further, Nomad’s special ability involves deploying a K9 attack dog that can be commanded to either follow the player or to patrol a designated location.

Bosley first learned about the opportunity to become Nomad via an advertisement sent to him on Jan. 8, 2018, from a website that lists and markets various jobs in the acting world. The instant he read the advertisement, Bosley knew he fit the bill in terms of looking the part.

“The project name was ‘Iconic Video Game,’ and it just listed the the shoot dates,” Bosley said. “One of the characters said ‘Nomad’ and the description was ‘Huge, muscular guy with horseshoe mustache and sideburns. He is dangerously handsome with sharp features and intensity to spare.’”

The same day of the Nomad photo shoot, which happened the first week of February 2018, Bosley had been up in the mountains of Southern California near his Los Angeles home working on a different shoot for a national Jeep commercial. Bosley said he was exhausted from shooting the Jeep commercial material and considered skipping the Nomad shoot; however, he said that he reluctantly appeared for the Nomad wardrobe fitting, adding that the physical appearance requirements of the Jeep shoot likely helped him nail the part of playing Nomad, too.

“For this national Jeep commercial I had to grow out a cavalry-era mustache and ride around on horseback for hours,” Bosley said. “I had spent a whole day riding horses, I was covered in mud, smelled like manure and so I just wanted to go home. It’s feast or famine in this industry, though, so I rush over there in jeans and a T-shirt, which I normally wouldn’t wear, and I did have the handlebar mustache. Had I not had the mustache, I am almost positive I wouldn’t have booked the job.”

Bosley said the experience of being cast to play Nomad was much different than he expected. Initially, Bosley anticipated that he would spend several hours wearing a motion-capture suit that uses reflective sensors to analyze the user’s movements to create a digital skeleton for the character animations in the game.

Such was not the case, as Bosley soon found out that his job for becoming Nomad simply involved him physically looking like the character and posing in various positions as a photographer took still photographs of him.

“In most video games, there is a dude wearing tights with the little reflective balls on it that they use for digitally capturing the characters movement,” Bosley said. “What was different about this is that I was literally in wardrobe dressed like the character in the game, wearing this weird military suit and this bite-guard for my character’s dog and they were taking one-dimensional pictures with a high-end camera. I pantomimed the various poses and positions they wanted and then just went home and wrote the whole deal off.”

It wasn’t until about eight months later, a week or two before the game was released, that Bosley started scouring the internet, specifically online video game forums, in an attempt to learn how his photo shoot was used for advertising or marketing materials.

“I started getting on the IGN forums and some footage had gotten leaked accidentally,” Bosley said. “It was gameplay footage and the character was straight up me. I was like, “Whoa, this is awesome.’”

Though Nomad was based heavily on Bosley’s appearance, the creation of the character involved several other individuals as well. Bosley served as the aesthetic reference material for Nomad’s physical appearance, a different actor developed the characters movements via a motion-capture suit and another actor, David Cooley — who has voiced video game characters in “Final Fantasy XV,” the “Horizon Zero Dawn” series and “Dishonored” — was cast to voice Nomad in both “Call of Duty: Black Ops 4,” and its predecessor “Call of Duty: Black Ops 3.”

Bosley, in addition to requests for signed images of Nomad, also received many emails from fans showing marketing materials for “Call of Duty: Black Ops 4” depicting Nomad on billboards at Madison Square Garden in New York and the Los Angeles International Airport. Bosley even had the chance to fly out to New York to snap a selfie with Nomad, or in essence the digitized version of himself.

In addition to playing Nomad, Bosley played the role of Steve Porter, a Navy Seal on CBS’s military drama “SEAL Team;” a Secret Service agent in the movie “Vice” that was released on Christmas Day and is considered a top-candidate to fill the role of Jack Reacher for the “Jack Reacher” streaming television series currently in the pre-production stages.

Career-wise, Bosley said this experience sits atop the list of roles he has played, not only because it was “a straight-up giddy kick in the pants,” but also because it allowed him to work on a project whose primary audience was children.

“Out of all the projects that I have done, this one had the most involvement with kids and I love that,” Bosley said. “What was cool is come late October, early November after the game dropped, people started contacting me saying they would love to get a signed picture of Nomad for their son, brother or husband. So just before Christmas I sent out about 50 of those. After Christmas, people started sending me pictures of their kids holding an autographed picture of me as Nomad.”

Bosley continued, “And for me, growing up I always wanted to take a selfie or get an autograph of (Sylvester) Stallone, Arnold (Schwarzenegger) or Hugh Jackman and this was just like that. It was like some of these kids’ favorite Christmas present, so for a kid who always wanted to be in movies or on TV it was really cool to see a little reciprocation of my roles.”