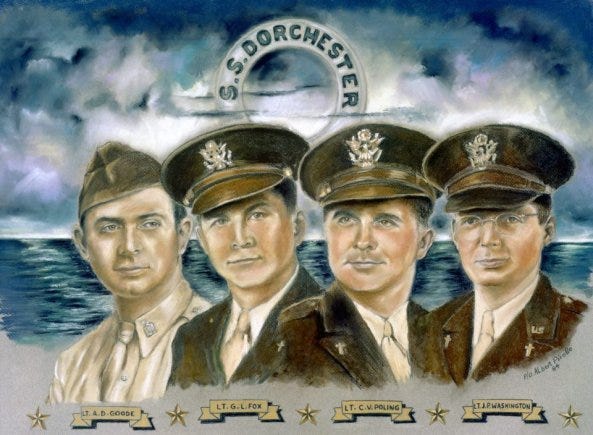 The 77th anniversary of the sinking of the United States Army Transport Dorchester and the selfless acts of four Army chaplains who sacrificed their lives to save others will be marked by ceremonies at American Legion Posts nationwide on Sunday.

The Dorchester  was sunk on Feb. 3, 1943, while transporting troops to an American base in Greenland. A German U-boat fired a torpedo that struck the ship, killing 672 of the 902 officers and enlisted men, merchant seamen and civilian workers aboard.

According to an Army.mil article, Petty Officer John J. Mahoney was headed back towards his cabin when someone asked him where he was going.

"To get my gloves," Mahoney replied.

"Here, take these," said Goode as he handed a pair of gloves to Mahoney. 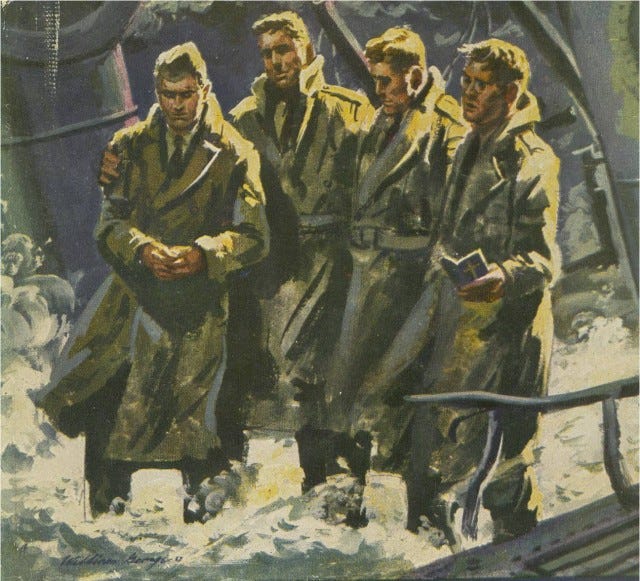 As the ship went down, survivors in nearby rafts could see the four chaplains -- arms linked and braced against the slanting deck of the Dorchester. Their voices could also be heard offering prayers and singing hymns.

American Legion posts nationwide remember Four Chaplains Day with memorial services that pay tribute to the chaplains and the other men who lost their lives.

The four chaplains were posthumously awarded the Distinguished Service Cross and Purple Heart. Congress wanted to confer the Medal of Honor on them but was blocked by the stringent requirements which required heroism performed under fire. So a posthumous Special Medal for Heroism, The Four Chaplains' Medal, was authorized by Congress and awarded by President Dwight Eisenhower on Jan. 18, 1961.It was never given before and will never be given again, according to Army.mil.