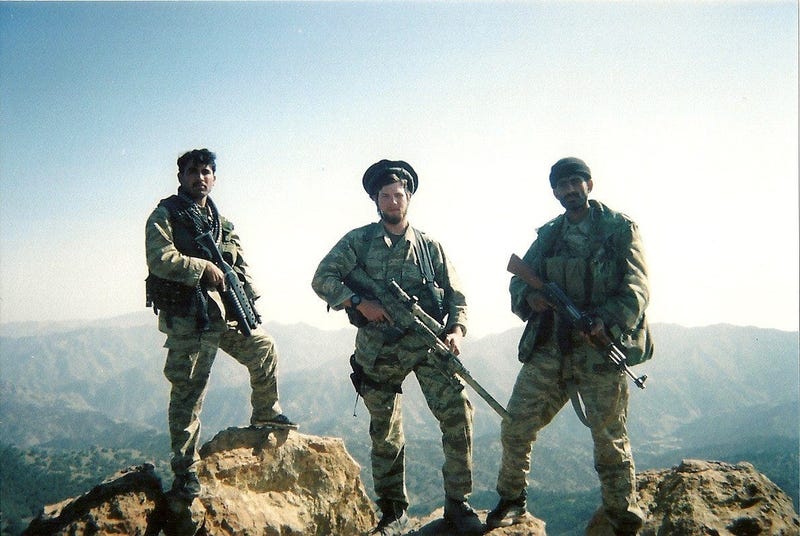 Since leaving the Army in 2010, Jack Murphy has done a lot of writing. His literary credits include several novels, countless articles, and non-fiction works focusing on Benghazi, ISIS and more. Despite spending so much time these days behind a keyboard, there was one story the former Green Beret didn't tell. Oddly enough, it was the one he knew best.

Murphy's Law, the new memoir available now from Simon & Schuster, covers his life's story including his years in 3rd Ranger Battalion and 5th Special Forces Group, and it doesn't stop there. The autobiography then digs into his post-service transition including his time as a college student, and eventual co-founder/investigative journalist at SOFREP/NEWSREP. People with far less interesting trajectories have written memoirs, but it was something Murphy intentionally avoided for nearly a decade.

Murphy says it was highly unlikely that any editor or publisher could have convinced him to write about himself, and in the end, they didn't. It was not a literary agent tossing dollar figures around that did the trick, but a heart to heart with one of his brothers-in-arms. Murphy recalls that his change of heart towards penning a memoir came after a conversation with his friend Jim West, a retired Special Forces Warrant Officer, during which they started discussing the fact that Murphy told the stories of so many others without delving into his own.

A little blurry but still a memorable moment. There are a lot of things that went down in Iraq that still give me heartburn but what I'm proudest of is working with Tal Afar ISWAT. After we left they kept fighting ISIS, never quit, and liberated their home. pic.twitter.com/lQnEJG5KE7

"He said 'well you know what that is? It's PTSD. You're avoiding the issue,'" Murphy says of that talk with West. "When he told me that, it was right around the same time I'd had kind of a chance meeting at a book signing for Kris Paronto's book. And I met an editor at Simon & Schuster."

From Mogadishu to the homefront: Delta Force vet fights for his brothers and their families

While he initially declined that editor's offer, they made sure Murphy knew the door was open if he ever changed his mind. The conversation with West stuck in his mind and eventually led him to begin work on Murphy's Law, which Murphy says came with unique challenges. While there wasn't a need to do much research on his subject, there was a decision on what to include.

"You could very easily get into writing a sort of like 'Moby Dick' sized book about all of your thoughts and feelings, and waxing poetic," Murphy says of the process. "...For the most part, I tried to focus on combat deployments, to focus on my trips to Syria and Iraq as a journalist. Really highlight some of those things and keep it exciting."

Some stuff just didn't make it in the book as I decided to focus on operations rather than training, but these old pictures are still pretty groovy. This was a training exercise with 160th SOAR in 2005 when I was a Ranger sniper. https://t.co/EQcEOz4fej pic.twitter.com/rJu3Eg4COU

Murphy had former teammates take a look at the book before it was published, and the feedback was positive. Still, he knows the criticism is going to come on two specific fronts. First, he writes about his experience warts and all which means it's sometimes critical of the missions he undertook, and American foreign policy writ large. Second, there are those in the Special Forces community who don't appreciate when a "silent professional" speaks out.

Murphy makes no apologies for the former. Simply put, he has opinions and is not the type to hold them back. As for the latter, he believes many of those hard-liners are hypocrites.

"I take it all with multiple, large grains of salt," Murphy says. "Most of the people who say those things are people who have leveraged their military career to work as private military contractors or work for the DoD down at SOCOM or SOCCENT down in Florida. They use their military career to make large sums of money in the private sector and then they want to turn around and tell other people that they shouldn't start a business selling Ranger t-shirts or coffee mugs, or writing a book. I mean, it gets kind of silly to me."

In 2014 I was (likely) one of the first American reporters to hit the ground in Kurdish held Syria, known as Rojava. In my book, I tell the entire surreal story of getting smuggled in, hanging out with a female sniper unit, and traveling to the frontlines. https://t.co/FCEXRI0Lqs pic.twitter.com/OEeclRj863

Regardless of criticism, or praise, Murphy says going back to put his experiences down on paper gives him a sense of closure.

"There's a certain point in my life, maybe just in the last few years, when I just woke up in the morning and realized: look, I don't need to prove I'm a tough guy every day. I don't have to prove that to anyone, not even my self, especially not my self," Murphy says. "The book is definitely the closing of one chapter of my life, and the opening of the next."

As far as the contents of that next chapter, Murphy says it will include quite a bit more writing. He has ideas for new books, and no plan to stop covering what he calls the "shenanigans" the military gets up to around the world. Mostly, when speaking to Murphy you get the sense he's ready to getting back to writing about anyone, or thing, not named Jack Murphy.

You can hear the full interview with Jack Murphy below.