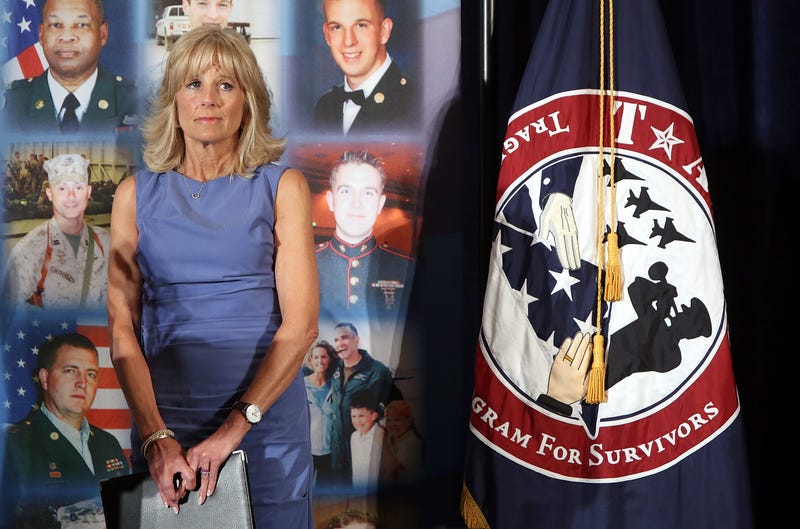 As the former second lady, Jill Biden has championed troops and military families for years. Now, she brings that experience back to the White House.

As a military mother, Biden worked with former First Lady Michele Obama to establish initiatives and programs that would support military families such as the Joining Forces initiative which challenged all Americans to take action and find ways to support and engage military families in their own communities.

She also wrote a children's book in June 2012 titled "Don’t Forget, God Bless Our Troops," tells the story of a military family’s experience with deployment through the eyes of Dr. Biden’s granddaughter, Natalie, during the year her father is deployed to Iraq.

More recently, on the campaign trail, Biden promised she would continue the work for spouse employment that she has been involved with for years. The Biden campaign promised to create military spouse entrepreneurship programs that would provide grants, mentorship and technical assistance to spouses. Biden has also worked to find a way to extend the time between permanent change-of-station (PCS) moves which are largely detrimental to spouse career-building.

The Biden Foundation -- a nonprofit created in 2017 -- is also a founding sponsor of the Hiring 100K initiative, a program launched by the U.S. Chamber of Commerce Foundation's Hiring Our Heroes program in collaboration with Starbucks that's designed to find jobs for 100,000 military spouses.

“Military spouses are too valuable to be left on the sidelines,” Biden said in a video for the Military Officers Association of America.

“Your contributions deserve to be recognized,” she told spouses, “and your careers deserve our support.”

It is now expected that Biden will bring that same drive back to the White House as the next first lady. She could make military families her official cause.

Joe and Jill Biden are the parents of a soldier and a former sailor, though Joe Biden himself never wore the uniform, receiving draft deferments during Vietnam like the president. The Biden's younger son Hunter Biden became a sailor later in life but was discharged following a positive drug test. The older son Beau Biden, an Army major who served in Iraq, died in 2015 at 46 from brain cancer. Biden has said he believes his son's cancer may have been caused by military toxic exposures and he has made addressing veterans' exposures a key part of his platform.