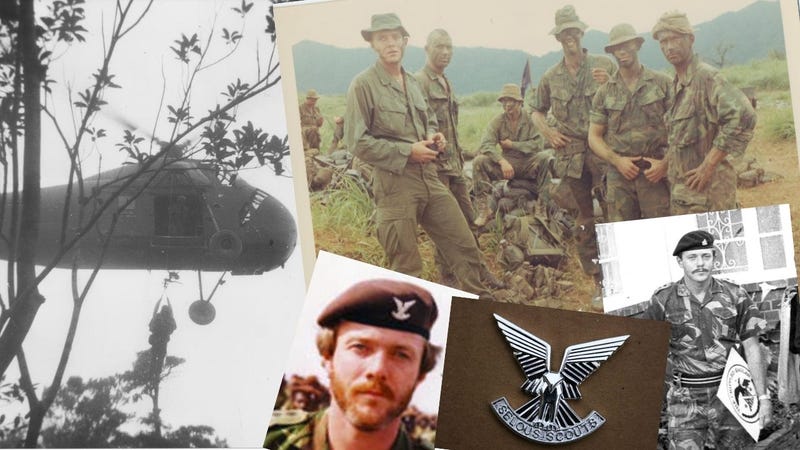 When John Cronin, author of "The Bleed," got drafted in 1966, he knew he wanted to serve with troops who were volunteers feeling that he would have a better chance with guys who wanted to be in the Marines and in Vietnam.

"I thought I might stand a better chance of surviving," Cronin recalls -- although people at his church looked at him like a walking dead man when he announced his decision.

"I had to sit her down," Cronin recalled of an elderly lady at his church who became so distraught upon hearing of his decision.

Cronin arrived in Vietnam as a Marine radio operator who had also been trained in Morse code and volunteered for recon. Soon, he was going out on patrols in the bush. On his first patrol, just a week and a half into his tour, their lieutenant inserted the recon team onto a bald hill where they got shot up by the North Vietnamese Army (NVA).

"Those guys simply did not seem to be afraid of getting killed," Cronin said of the enemy. "I've never seen anything like it."

On another patrol, their recon team was in a patrol base when a NVA soldier hit a trip flare the Marines had put out for early warning.

"The whole hillside seemed to move," Cronin said. The enemy was all around them. "They were extremely well disciplined."

Cronin said that attack was as well coordinated as it was intimidating as they faced a human wave attack. Cronin threw hand grenades and detonated Claymore anti-personnel mines.

"The hill shook under us and you could see the spray of debris," he described.

On another patrol, Cronin was grievously wounded by enemy gunfire and was sent home to recover. That didn't slow him down much as he went back to Vietnam, and this time went out on patrol with Force Recon, who typically went out in smaller groups than Recon. But it wasn't just the tenacious NVA that they had to worry about in the bush, but also the wildlife.

"Those tigers were some of the scariest creatures that roamed those jungles. There was so much food available from NVA and VC bodies that they no longer had to hunt and got a taste for human flesh," he said. One particular tiger weighed 500 pounds and was stalking a Force Recon patrol. The tiger plucked one Marine right out of his patrol base without his teammates even realizing it until the next morning. The tiger dragged him down the trail and the Force Recon Marines didn't find him until the next morning, as the tiger was still eating the remains.

Cronin's patrol was once stalked by a tiger as well. The four Marines could tell something was following them from the way the noise from the jungle responded around them. They set up ambushes to kill whoever was tracking them, but no one ever walked into them.

"It was really unreal," Cronin remembered. On the third night, they heard the tiger roar right next to their patrol base. "He was only about twenty feet away. I think he was about to make a move." The Marines fired in the direction of the tiger causing him to run away.

After Vietnam, Cronin embarked on another adventure flying to Rhodesia and joining the military as the bush war was heating up in 1976. He presented his paperwork from the Marine Corps and was accepted. He served as an officer in the Rhodesian Light Infantry (RLI). First, he had to go to airborne school in South Africa, and then served on the ground under a sergeant before being allowed to accept a command as an officer. With the RLI, he led a troop consisting of 30 men which would conduct Fire Force missions hunting down and killing communist terrorists.

But there was another side of the Rhodesian conflict which Cronin doesn't shy away from.

The Rhodesian government was white supremacist in nature.

"They were not sharing power. They were dominating the political situation and they were not particularly smart about how they partitioned power," Cronin described and, "this irritated a lot of African nationalists...this objection to white domination took the form of armed resistance."

By the time Cronin arrived in Rhodesia that armed resistance was being sponsored by communist powers such as Russia, China, and North Korea.

From Cronin's perspective the conflict could have been avoided had the Rhodesian elites invited moderate black African nationalists into the government, but they wouldn't compromise. The other factor that impacted any chance of negotiation was when terrorists shot down two Viscount civilian passenger aircraft, then murdered any survivors on the ground.

The next stop for Cronin was the join another Rhodesian unit, the Selous Scouts who were famous for pseudo-operations conducted in disguise to look like the enemy. After going through the Scout's selection he began his training, including Dark Phase in which he lived in a simulated guerrilla camp where the instructors were reformed enemy insurgents.

Other adventures followed after the war as Cronin pursued academics, studying in Egypt and then in Beirut where he was kidnapped by Hezbollah at one point.

Having attained his Ph.D., Cronin is a university professor today and enjoys a more quiet life with his wife and children. Cronin shares many of his nuanced views and unique experiences in his memoir titled The Bleed.