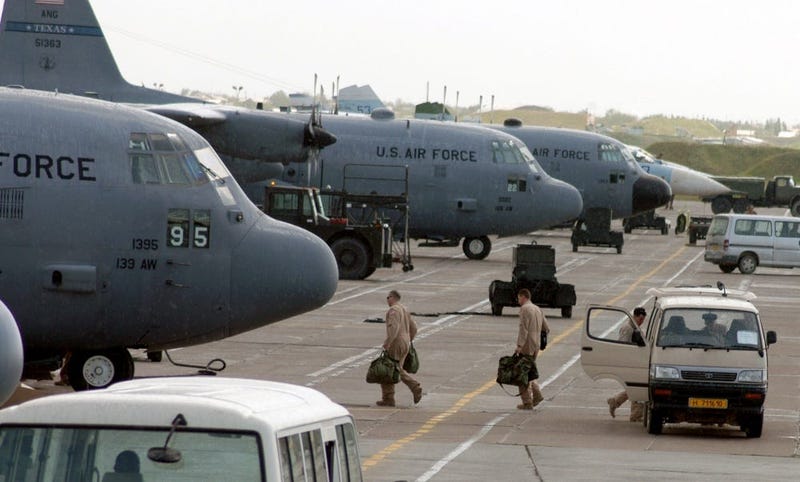 Veterans who served at a secret Soviet-era airbase in Karshi-Khanabad, Uzbekistan, have sickened and died from illnesses they believe were caused by exposures to toxicants at the base, including dangerous levels of radiation and "black goo" oozing up from the ground.

On Wednesday, the National Security subpanel of the House Oversight Committee held a hearing about so-called "K2 veterans," the exposures they were subject to and the Defense Department and Department of Veterans Affairs' responsibility to care for them.

"K2" refers to the Soviet-era base used by U.S. Army, Air Force and Marine forces as the northern staging ground for the Afghanistan invasion. A trove of recently declassified Pentagon documents revealed what may be the first official admission by the Defense Department that the former Soviet military base was a hazard.

The Pentagon documents showed the base was built on a foundation of dangerous levels of radiation. Defense officials estimated that more than 15,000 troops served at and may have been exposed at K2. The U.S. military occupied the base from at least 2001-05 and it is currently home to the 60th Separate Mixed Aviation Brigade of the Uzbek AIr Force.

The base, constructed quickly above what turned out to be the remains of a former chemical weapons factory, is still not part of any official toxic exposure registries at VA or the Defense Department, though veterans who served on the base, or their families, have shared stories of how they have sickened and died because of toxic exposure there. Those veterans reported symptoms from gastrointestinal illnesses and neurological disorders to rare cancers, and described "black goo" oozing up from the ground.

"Our nation’s veterans have repeatedly sought acknowledgment of their injuries and assistance from Washington, only to be met with resistance, skepticism, and doubt," subcommittee Chairman Stephen Lynch, D-Massachusetts said, adding that the story was playing out again for those who served at K2.

"Today, nearly two decades later, the veterans and service members who deployed to K2 have self-reported nearly 2,000 adverse health conditions, including 491 cancers, that they believe are connected to their prior service and exposures at K2," Lynch continued. "And yet, despite clear evidence that service members were exposed to dangerous hazards at K2, the VA inexplicably continues to deny that the life-altering illnesses reported by these veterans are service-connected—even after a 2015 Army Public Health Study found that K2 servicemembers were five times more likely to develop certain forms of cancer compared with others who deployed to South Korea."

"Isn't that kind of huge?" asked ranking member Glenn Grothman, R-Wisconsin. "It appears as though something should have been said to the troops about potential hazards ... Is that correct?"

Deputy Assistant Secretary of Defense for Health Readiness David Smith said DoD held town halls, briefings and published brochures on risks at the base, some of which were mandatory, but Grothman shared information from a service member that directly contradicted that, saying that no such briefings were held and no information on potential exposures was shared with troops.

VA officials, including Secretary Robert Wilkie, have previously denied any link between K2 and cancers or other major health concerns among veterans, even before the department has conducted any scientific studies. VA's continued denial, Lynch said, left "hundreds if not thousands" of K2 veterans ineligible for care and disability benefits for their service at the base.

"This is an injustice that must be rectified," he said, adding that Wilkie has the authority to grant presumptive status for those veterans today.

Service members at K2 may have been exposed to jet fuel because of leaking Soviet-era underground fuel distribution systems, volatile organic compounds from the fuel, particulate matter and dust, depleted uranium from Soviet missiles destroyed at the site, asbestos in the buildings, lead-based paint in at least one building and more, according to VA.

The Defense Department conducted an initial study of cancer outcomes among service members deployed to K2 and found a higher risk of malignant melanoma and neoplasms of the lymphatic and hematopoietic tissues (excluding Non-Hodgkin Lymphoma and Leukemia). The results of the study were based on only a few cases of each type of cancer, though, and VA said should "not be viewed as definitive evidence" linking cancer with service at K2.

VA and DoD are conducting a follow-up epidemiological study, which VA Press Secretary Christina Noel said is expected to wrap up in about 14 months. VA officials said Wednesday it was working with "a very small staff" for the study but hoped ot have at least a preliminary report for Congress by next December.

One of the biggest frustrations for advocates, veterans and their families, is that disability benefits often can be denied by the VA for a lack of evidence tying exposures to specific illnesses, and there are not "presumptive" conditions for many types of exposures. Even veterans exposed to Agent Orange decades ago still struggle to have their illnesses recognized as being connected to their service and therefore eligible for VA care. VA leaders have often cited the need for more research before presumptives can be established.

VA Secretary Robert Wilkie previously said he did not have the authority to make necessary changes to provide benefits to thousands of veterans exposed to toxicants during the Iraq and Afghanistan wars and that Congress must pass legislation to allow him to do so, but that legislation would likely require studies to link service to those exposures, which has stagnated the process for veterans to receive benefits and care in the past.

Lynch and other lawmakers did not appear convinced by VA and DoD's promises of transparency and dedication to address the issue.

DoD withheld the declassified documents from lawmakers for months, lawmakers said, and the VA study is expected to take at least a year, "all while K2 veterans are left waiting for answers," the chairman said. VA declined to provide a senior leader to testify at the hearing despite lawmakers' requests.

Lawmakers said veterans and lawmakers had produced "more than enough evidence" to link service at K2 to diseases that should be covered by VA, and repeatedly asked VA what the harm would be in providing a presumptive to get the veterans care and benefits as soon as possible while VA pushed back on doing so.

"What is the danger in providing this presumption?" Lynch asked. "Is that such a bad thing? Is that what we're guarding against here?"

Patricia Hastings, VA's chief consultant on post-deployment health services, said VA was committed to studying the exposures at K2 but spent much of her testimony listing ways in which the exposures were unlikely to cause the health concerns alleged, saying only 20 veterans filed claims related specifically to K2 service. If it was within her power to issue presumptives, Hastings said she "would not at this time" because she believed veterans deserved definitive answers before benefits and care are provided.

"Time is of the essence," Hastings said, followed immediately by, "Good science takes time. It's going to take some time ... A presumption is premature."

Lawmakers argued VA is not acting with enough urgency for ill and dying veterans.

"These veterans need help and they need it now," said Rep. Mark Green, R-Tennessee, a doctor and retired Army major who said he flew through K2 as a member of the Army's 160th Special Operations Aviation Regiment.

"These veterans can't wait," Rep. Clay Higgins, R-Louisiana. "Do your studies ... Knock yourself out. In the meantime, grant these veterans the presumptives that they need. We do not understand this lack of providing service to our veterans."

"It's been 20 years," Lynch said. "That's not comforting for a lot of these families ... We all own that. We can't allow this situation to continue. VA needs to fix this."

For information on how to add yourself to VA's burn pit and airborne hazard registry, click here. Even though Uzbekistan is not listed on VA's registry, VA officials said Wednesday K2 veterans may be eligible to add themselves to that registry.
Need help with toxic exposure? Click here for a list of resources and information on VA and Defense Department registries.

Veterans of 'black goo' base to appear before Congress