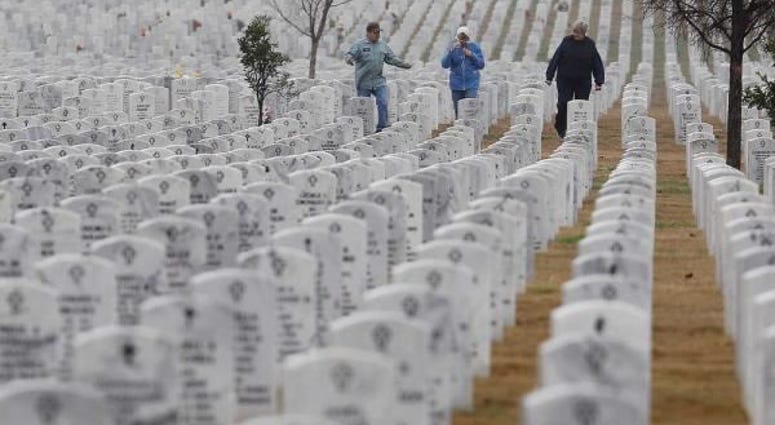 Lawmakers are getting involved in efforts to have the Department of Veterans Affairs remove swastikas from headstones in two VA cemeteries.

A military religious rights group last week threatened the Department of Veterans Affairs with a lawsuit if they do not "immediately" remove three headstones with swastikas from VA cemeteries in Texas and Utah. The Military Religious Freedom Foundation is an organization dedicated to "ensuring that all members of the United States Armed Forces fully receive the Constitutional guarantee of religious freedom." They also recently mounted an attack against a chaplain from South Korea who allegedly distributed a controversial book titled "Coronavirus and Christ" to his subordinates.

The group is demanding Secretary of Veterans Affairs Robert Wilkie remove three headstones marking the burial sites of German Prisoners of War from VA cemeteries. House Democrats from the Committee on Appropriations wrote a letter to Wilkie demanding the same.

"Allowing these gravestones with symbols and messages of hatred, racism, intolerance, and genocide is especially offensive to all the veterans who risked, and often lost, their lives defending this country and our way of life," the letter reads. "It is also a stain on the hallowed ground where so many veterans and their families are laid to rest."

Each of the headstones includes a German inscription and a swastika insignia. Wilkie must "eradicate" the headstones in question, explain why they were buried alongside American veterans in the first place, and issue a "heartfelt apology to all United States veterans and their families," according to MRFF's demands.

"MRFF hereby demands that V.A. Secretary Robert Wilkie IMMEDIATELY replace the gravestones of all German military personnel interred in VA National Cemeteries so that ABSOLUTELY NO Nazi-era symbols, such as the repulsive swastika, and no homages to Adolph Hitler, or the German people and the German fatherland he led as the evil Fuhrer of the Third Reich, will ever again be allowed to appear on such gravestone," a statement from MRFF founder and Air Force veteran Mikey Weinstein reads.

VA has already acknowledged that they're aware of the headstones -- they've also said they are not authorized to remove them. The headstones were placed in the Fort Sam Houston and Fort Douglas Post cemeteries more than 30 years before those cemeteries fell under VA jurisdiction. And now they're protected, the department says.

"The National Historic Preservation Act of 1966 assigns stewardship responsibilities to federal agencies, including VA and Army, to protect historic resources, including those that recognize divisive historical figures or events," VA said in a statement to MRFF. "For this reason, VA will continue to preserve these headstones, like every past administration has."

"Really? According to the VA, Hitler and his evil, genocidal Third Reich are merely “divisive historical figures or events," now?! DISGUSTING and REPREHENSIBLE!!!" MRFF's response to VA's statement reads.

"VA’s decision to leave the swastikas and messages honoring Hitler in place and ignore the calls to take them down is callous, irresponsible and unacceptable," the letter from the appropriations committee adds. "We understand that these cemeteries were not under the jurisdiction of VA at the time these headstones were installed, but now that they are under VA’s jurisdiction, there is no excuse for VA to continue to maintain these headstones, instead of replacing them."

Now, MRFF has begun "caucusing" with its lawyers to "determine the viability of expeditiously filing suit against the VA in Federal Court."