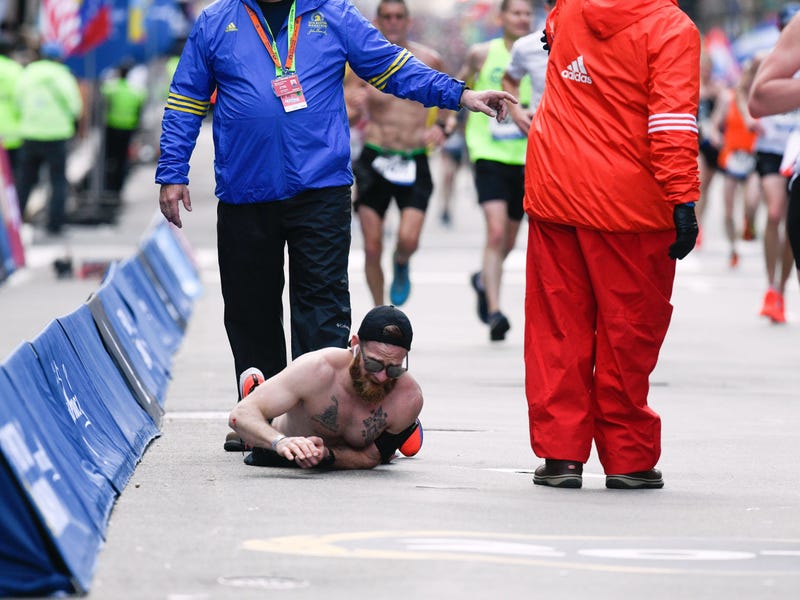 When times get tough, Marine veteran Micah Herndon has two escapes. He runs and he repeats three names over and over.

They’re the names of three men killed in an IED explosion during a deployment in Afghanistan: Marines Mark Juarez and Matthew Ballard, and British journalist, Rupert Hamer.

Herndon, a former lead machine-gunner in the Marine Corps’ “Lava Dogs” division who deployed to both Iraq and Afghanistan, ran the Boston Marathon in honor of his comrades and friends. Their names were scrawled in black ink on his hand and etched on golden plates threaded through the laces of his bright orange running shoes. He was determined to carry those names across the finish line.

But during the final miles of the race, Herndon said his legs began cramping. Within about 100 yards of the finish line, his legs gave out completely. But he was determined to carry those names across the finish. So he crawled -- repeating their names all the time.

“When times get tough that’s what I resort to is their last names, I just repeat their last names,” Herndon said in an interview with Bull and Fox on 92.3 The Fan in Cleveland. “Whenever I’m thinking ‘this sucks, this hurts, I’m in pain it would be easy to just give up’ I say their last names to ground myself back to reality and to get my refocus. Whatever pain I’m going through is not nearly, not 1,000th what they went through or what their families are going through.”

Since his viral finish, Herndon has been invited by organizers to the New York City race and will compete in November. Hundreds have reached out to tell him how inspiring he is. He’s hoping to use his moment in the spotlight to bring awareness to veterans.

“Awareness of what the veterans come back from and also there is an outlet for veterans to have when they do get back,” he said. “Awareness not to be ashamed of the battle scars that we do wear coming back home.”

Herndon said pride often gets in the way of veterans seeking help.

“A lot of people see it as weaknesses, but for me, my PTSD and survivor guilt, that’s my strength. That’s my fuel. It fuels my workouts and my everyday life and my passion. I feed off of that."

Herndon said he hopes veterans find their own paths to healing, and don’t rely solely on a “broken” VA healthcare system.

“The message I want to get out to veterans is don’t rely on the broken system that we have back here if you can be proactive and do something on your own,” he said. “Figure something out, whatever your release may be. Mine is just running. If you can find that on your own and not rely on them, that’s the ultimate goal.”