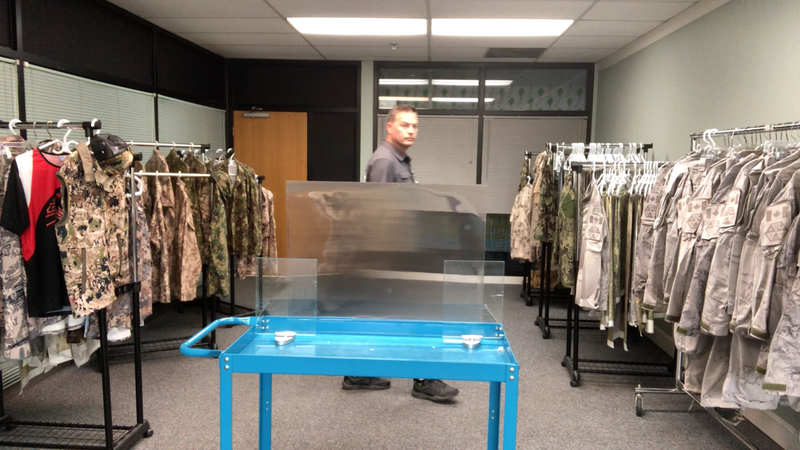 When inventor Guy Cramer met with the U.S. Army’s most elite unit, he asked the operators if they had a way for their troops to move through a building undetected if it used security measures such as thermal cameras or motion sensors. They replied that no, they didn’t.

“Well, now you do,” Cramer told them.

It all started back in 2012 when Cramer came across a technology that had been around since the 1920’s: lenticular lenses. This is the type of material used on children’s books, games, movie posters or comic books that create the appearance of a 3D image as the viewer moves the medium around from left to right. Cramer realized that this material had never been used outside the scope of what it had originally been designed for and began experimenting with it.

He soon realized that the material had light-bending properties which could make an object (or person) behind it “disappear.”  With further experimentation, he greatly improved this ability and developed a product that he calls Quantum Stealth. Despite showing it off to various military and law enforcement organizations, Quantum Stealth remains out of government hands for the time being and Cramer has now applied for commercial patents in the U.S. and Canada.

Cramer is moving forward to protect his intellectual property, but would prefer to see his invention absorbed by a friendly government.

“We were trying to do this properly with ethics at the forefront knowing how this material would likely be used by parties unknown,” Cramer told Connecting Vets.  “You will get countries like China who will produce this without permission.”

Because of the light-bending properties of Quantum Stealth, it blocks thermal detection, confuses motion sensors and also hides a human signature from the infrared spectrum used by night vision devices, all in addition to rendering you invisible to the naked eye. In the hands of the bad guys, Quantum Stealth could render many of the technologies used to find, fix and finish the enemy that are currently used by NATO armies obsolete.

But what about true optical camouflage that can be applied to a uniform like you've seen in science-fiction films like “Predator” or “Ghost in the Shell?" Cramer says the material as it is needs a certain level of stand-off from the person being concealed, however he has experimented with putting a layer of oil between the lenses to help mitigate this issue.

Cramer told Connecting Vets that he was once skeptical that such a thing could be accomplished with this particular technology but now he thinks that with a government investing in Quantum Stealth that he is 80% sure it could be done. “It is not ready to be made into a jacket but it is getting really close,” Cramer said.

Want to get more connected to the stories and resources Connecting Vets has to offer? Click here to sign up for our weekly newsletter.
Reach Jack Murphy: jack@connectingvets.com or @JackMurphyRGR