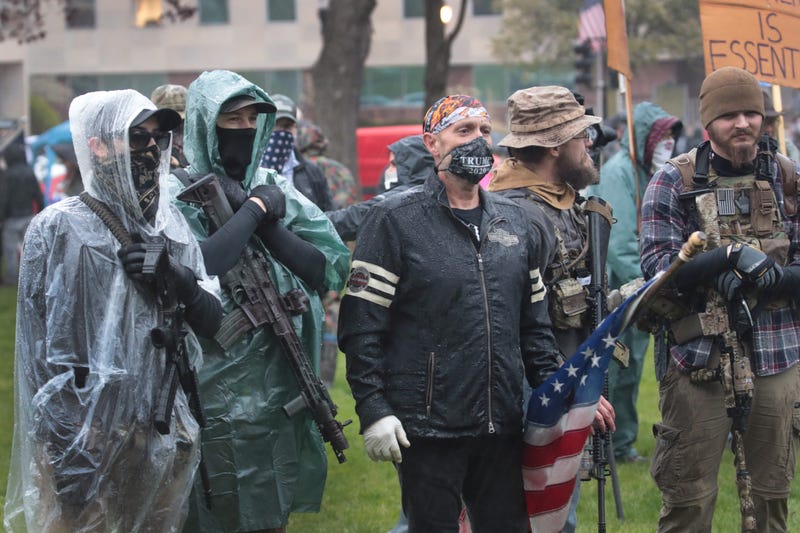 Over the course of eight days Air Force Staff Sgt. Steven Carrillo allegedly shot and killed a security officer and wounded his partner outside a courthouse, then ambushed and killed a sheriff's deputy and injured four other officers, according to law enforcement. Carrillo was a Phoenix Raven team leader, part of a specialized Air Force security unit that guards aircraft.

“Federal authorities say they linked him to the boogaloo movement from social media posts and from phrases he had written in his own blood when he was arrested following the ambush of the deputy,” AP reported.

Carrillo's lawyer says he has not seen any evidence that his client is involved in the boogaloo movement, calling it a terrorist organization that uses social media to target, “vulnerable and possibly susceptible individuals who may be receptive to their messages of hate and destruction.”

But what is the boogaloo movement really? Like many other internet subcultures in recent years, media pundits and experts alike sometimes struggle with the subject. In some ways, the Boogaloo movement is similar to other leaderless groups or movements such as Antifa, Occupy Wall Street, Anonymous, or Qanon in that anyone can claim to be a member.

The members have no clear hierarchy, and simply do not resemble the organizational structure of revolutionary or terrorist groups from the 1960s or 70s. Those structures shifted to an open-source warfare model brought about by the internet, telecommunications technologies, and the 2003 invasion of Iraq.

Connecting Vets first reported on the boogaloo social media meme projecting itself into real life in 2019, when Alex Booth, calling himself "whiskey warrior," had a standoff with police in New York. He live-streamed the standoff while walking around his house in body armor, talking about the boogaloo and calling police officers red coats.

Since that time, those espousing the boogaloo have become much more visible to the public as they show up at protests around the country, sometimes wearing Hawaiian shirts under body armor and carrying AR-15 rifles.

But while some may see the boogaloo as a call to action, motivating them to take to the streets, or at worst, murder police officers, others see it as a light-hearted joke.

“At first glance it all kinds of feels the same,” one Special Forces soldier told Connecting Vets. “Vets like it and I find that shit hysterical, I find the memes hysterical. For 99% of the vets out there who find that stuff funny, it is just a fucking joke,” he said.

When asked to define what the boogaloo means to him, he said, “it is a potential situation founded strictly not in any menace or spite but in the principles of how the nation was founded as representative democracy or republic where power is held by the people. And people use the memes to express their displeasure, and nothing more. They're jokes. Some people take it too far like that 'whiskey warrior' dude. For the majority of people, they're jokes, some of it rooted in political displeasure.”

Many of the memes that people like the Special Forces soldier post are inspired by video games such as Bethesda's 'Fallout' series, further blurring the lines between reality and fantasy. Those memes call out humorous fictional “side quests” for boog believers to begin, treating them as if they are the player character in a video game filled with non-player characters. Those quests are obvious jokes with gags like, "get a confirmed shotgun kill in a Teletubby suit." Others are more questionable, such as, "when the ATF come to confiscate your guns, shoot them in the back of the head."

Global Network on Extremism and Technology (GNET) Associate Fellow Jade Parker added that, “the terrorists are not representative of the Boogaloo community. The overwhelming majority of those who adopt the 'Boogaloo Boi' persona anticipate and prepare for a domestic civil war. They do not try to cause it. Boogaloo Bois are also not ideologically monolithic. They hold views across the political spectrum with shared interests in 2A protections, permaculture, self-sufficiency, and survivalism.”

Parker added that there is a real concern in that there, “is the adoption of accelerationism by a minority contingent within their milieu. That is, the concern is the transition from normal Boogaloo Bois passively prepared for societal dissolution to subversive accelerationists who undertake violent and non-violent action to disrupt the socio-political order.”

Accelerationists are terrorists who may belong to any number of different ideologies, or none at all, and seek to accelerate what they see as the inevitable destruction of society. An example would be Brenton Tarrant of New Zealand who live-streamed himself attacking a mosque and murdering civilians in hopes that it would ignite a chain reaction leading to a race war.

Therein lies the difficulty in understanding what is ultimately a meme whose definition is updated on a near-daily basis by thousands of anonymous internet users. For some, the boog is just a joke and is all about dressing up like Jimmy Buffet while out on the shooting range over the weekend. But for some, it is a call to murder their fellow Americans.