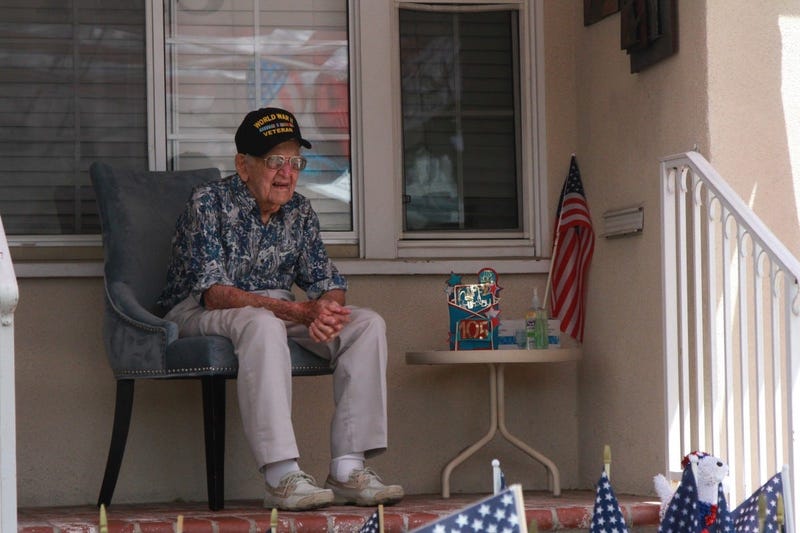 LAKEWOOD, Calif. –– World War II veteran Sam Sachs watches from the front porch of his home as a Humvee, a sheriff’s patrol car, and fire trucks roll through the usually quiet street. He smiles and waves at both the small parade, as well as the crowd that has gathered outside, made up of cheering friends, neighbors and well-wishers.

“It’s such a great honor to be in this position, it really is. It’s something I never expected. Who can imagine you’re going to reach this exalted age of 105,” said Sachs.

Sachs, a retired lieutenant colonel, wasn’t certain 76 years ago he would live to see the next day. He is amazed he survived the beaches of Normandy and has lived to the age of 105. The birthday has been made even more extraordinary by the outpouring of love and support from his local community.

“He is an amazing guy and when I heard about this celebration, I knew I wanted to participate,” said U.S. Army Sgt. Maj. Ron Cabrera with the California Army National Guard’s 40th Infantry Division.

Soldiers with the division helped honor Sachs’ birthday by participating in a parade and social distancing celebration coordinated by city officials April 26 in Lakewood.

More than 150 people came out to honor the D-Day veteran. A celebratory parade included a 1940 Packard driven by retired U.S. Army Reserve Command Sgt. Maj. Robert Crebbs, the singing of the national anthem and happy birthday by Spc. Raivyn Hearne, a vocalist from the 40th Infantry Division Band, and an M181 Humvee driven by division Soldiers.

Cabrera, an Orange County native, met with Sachs while volunteering through Optimal Hospice Care in Long Beach. Normally, the Cal Guard member would simply meet with a veteran in their home, but due to COVID-19 restrictions, the pair had to become a bit more creative.

Ivonne Meader, the administrator of Mom and Dad’s House, an assisted living facility that Sachs calls home, helped facilitate the social distance meeting. They spoke over the phone, with Cabrera outside a window of the facility and Sachs on the other side, allowing them to see each other.

“We had a great conversation. He has a great energy and when Ivonne mentioned the event and the desire for a Humvee, we couldn’t pass up the opportunity to help celebrate his 105th birthday,” said Cabrera.

Sachs’ service spanned 32 years. He joined the Army and later the reserve component before retiring at the rank of lieutenant colonel. The Grand Forks, North Dakota, native’s distinguished military career included serving with the 325th Glider Infantry Regiment, 82nd Airborne Division, during World War II, where he landed on the beaches of Normandy in his glider during D-Day.

“I wouldn’t want to be anywhere else today. We’re celebrating the life of a Citizen-Soldier,” said California State Guard Col. Richard Lalor, the public affairs officer for Joint Forces Training Base, Los Alamitos.

Sachs, who received the French Legion of Honor last year, received over 6,200 birthday cards from around the world and a birthday proclamation from President Trump. Michael Brown, the mayor of Grand Forks, declared Sachs’ birthday “Sam Sachs Day.”

Sachs was honored while social distance protocols were followed to avoid the spread of COVID-19.

Although it wasn’t the usual birthday party the 105-year-old would have had, Sachs said the community coming together to help him celebrate despite the health crisis made it even more meaningful.

“I’m considered a fortunate man to be here in this wonderful, beautiful country and the greatest little city in America, Lakewood,” said Sachs.