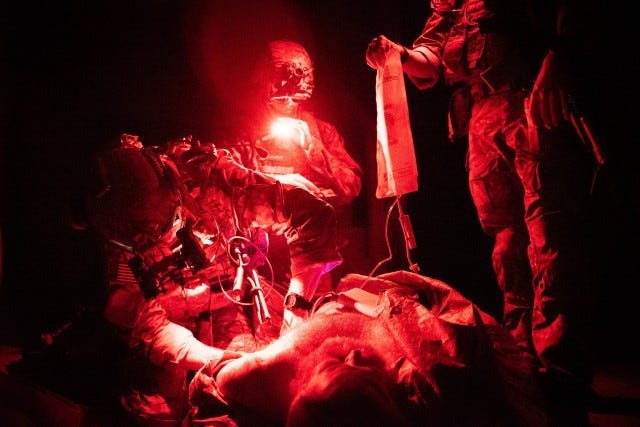 "Never shall I leave a fallen comrade…" third stanza of the Ranger Creed.On a hot, dark night in Wardak province, Afghanistan last summer, a special operations Ranger raid force conducted a helicopter insertion and what would later become a historical night. The routine Ranger task of capturing or killing high value enemy targets would include cutting edge lifesaving medical procedures never done in combat, with life or death hanging in the balance.While clearing through the objective, the assault force began receiving accurate Ak-47, machine gun (PKM), and other small arms fire from multiple enemy fighters near the target compound.The Ranger assault force returned fire on the enemy positions, utilizing their M4 carbines and squad automatic weapons along with shoulder-fired rockets and grenade projectiles.

As the assault force maneuvered on a shooter who barricaded himself into a fighting position, they were rocked by a large explosion near the breach of the target compound which left three Rangers were wounded.

Leading that fight to save their lives were Ranger Combat Medics, Staff Sgt. Charles Bowen and Sgt. Ty Able, from Bravo Company, 1st Battalion, 75th Ranger Regiment. They saved six lives that night.Maneuvering within meters of the barricaded enemy shooter, they surged to evacuate the wounded from the midst of the battle raging around them.Bowen and Able quickly assessed the two wounded casualties and directed Advanced-Ranger First Responders certified teammates, the 75th Ranger Regiment's equivalent to Emergency Medical Technicians, on how to continue medical treatment."The first casualty yelled out 'I'm hit, I'm hit!" I looked at his leg and did not see any blood so I told him to go outside of the building and have someone evaluate his wounds," Bowen said. "At the same time, the second casualty yelled out 'Doc, I'm real messed up!'"A Ranger, an Afghan partner force soldier and Bowen made their way through the dusty corridor to the courtyard where they saw the second casualty laying on the ground. He was conscious but contorted in an alarming manner.Without hesitation, Bowen identified the critically wounded casualty and rapidly pulled him behind the only nearby cover from the enemy gunfire, a small lump of earth no more than one meter high.Through the chaos of the enemy fire, Bowen determined the second casualty was critically wounded and began crucial lifesaving interventions."We began dragging the second casualty toward a safer location through the corridor and out of the breach," Bowen said. "After getting the casualty out of the breach, I began to treat him with the help of others around me."Bowen quickly placed a tourniquet on the man's right arm and leg and a junctional tourniquet around his pelvis."I asked the second casualty if he could hear me and he responded with 'Yeah, it really hurts, Doc,'" Bowen said.Bowen cut off the man's body armor to get a visual of his wounds, exposing a gaping hole on the right side of his chest."I went to my (medical) aid belt and pulled out a needle chest decompression, an intravenous kit and one gram of pre-drawn Tranexamic Acid (TXA, a medication for trauma patients that reduces death due to bleeding)," Bowen said.After checking his back for additional wounds, Bowen began an IV and administered the TXA and found that the man's radial pulse was rapid and weak. After this find, Bowen felt the casualty's chest and found that the left side was not inflating. 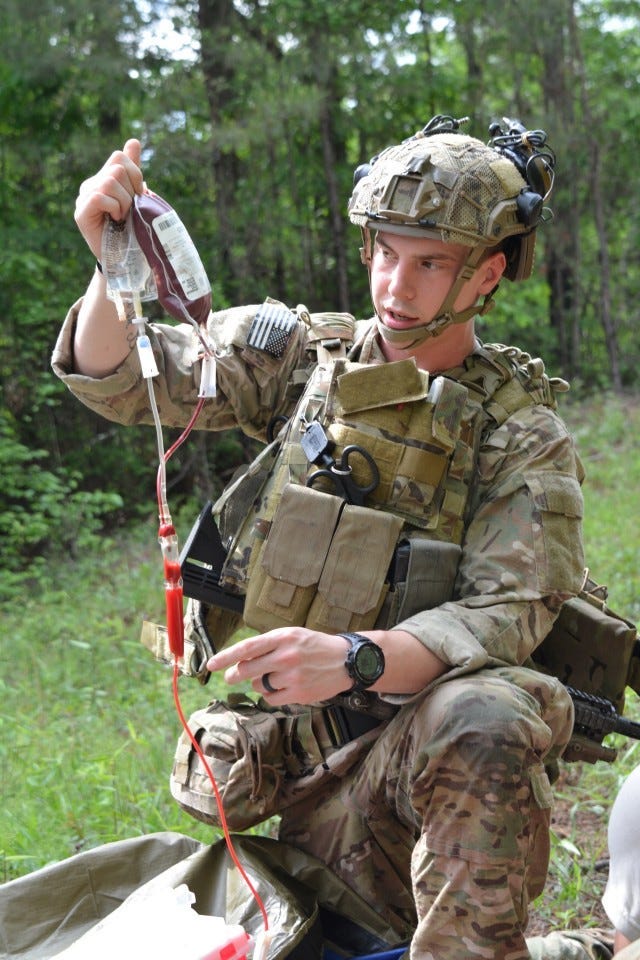