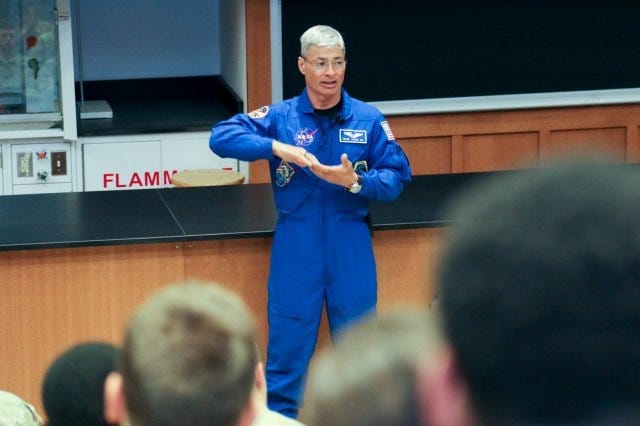 Photo credit Photo courtesy of US Army
By Connecting Vets

Twenty years after joining the U.S. Military Academy faculty for a short stint as a physics professor, retired Col. Mark Vande Hei returned to West Point to talk to cadets about his current position as a NASA astronaut.Vande Hei joined the astronaut program in June 2009 and launched to the International Space Station as a member of Expeditions 53/54 in September 2017. In all, Vande Hei spent 168 days aboard the ISS during his first trip into space. While aboard the space station, he took part in four space walks totaling more than 26 hours outside the station. "I will never forget the sensation of being in the airlock when EV1 opened the hatch and all of a sudden I got all this reflected light off the surface of the Earth coming in," Vande Hei said of his first spacewalk. "I couldn't see the Earth. It got really bright. I am getting chills right now because it was like, 'Whoa, that's outside and there is nothing.'" During his visit to West Point, Vande Hei spoke with cadets in the Physics and Nuclear Engineering Department about his time aboard the ISS. From tips and stories about hygiene and working out to the fear of stepping foot outside of the station for the first time, Vande Hei walked the cadets through his mission from launch to landing."It's always an interesting opportunity when you have interesting guest speakers that have a lot of diverse experiences and perspectives," Class of 2020 Cadet Joseph Kyburz said of the lecture. "For me as a nuclear engineering major, hearing him talk about charged particle events and how they could have impacted his mission and Newtonian physics on the Space Station was very engaging."Vande Hei also talked to the cadets about what it takes to become an astronaut. The first step along with being a U.S. citizen is to graduate with a four-year degree in a technical field such as engineering, physics or mathematics, he said. Three years of graduate level work or work experience in your field are then required before you can apply to join NASA as an astronaut, although that can be waived if you somehow find time to earn 1,000 flight hours of a high-performance jet, Vande Hei said.The interview process then includes a rigorous week long physical to make sure you are healthy enough for space travel and an unknown health ailment won't put you in danger once aboard the ISS."If you want to become an astronaut, I would say don't make your life goal becoming an astronaut," Vande Hei said. "Your success or failure in life should not depend on becoming an astronaut. We had 18,000 applicants apply to the class of 2017 and roughly 10 got hired."Along with the technical skills required, Vande Hei said that in order to be selected and be successful you have to be a consummate team player because once you go to space you are working and living in a confined space with a small group of people."I can tell you, all the people I got hired to be an astronaut with and the subsequent classes, they would all make great camping buddies," he said. "Eventually, that is what you're going to end up doing is camping with these people."