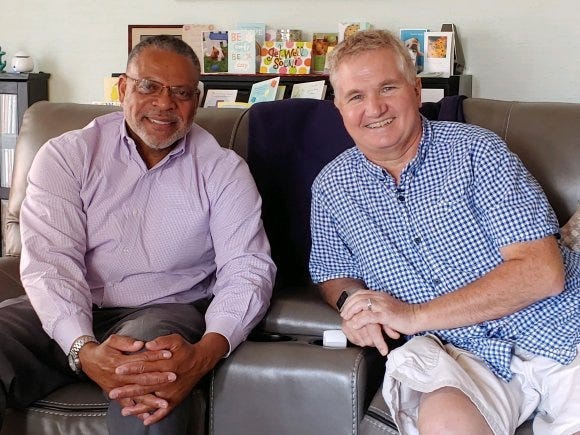 Before his flight left from Charlotte, Norvel Turner Jr. heard a fellow passenger yell for help.After running to catch the flight heading to Columbia, South Carolina, a 59-year-old man had collapsed in the aisle a few rows behind Turner. Not sure what had happened, Turner, a former Army Ranger instructor, watched as another passenger rushed over and started to do chest compressions. Turner's military training then kicked in. He went over and noticed the man, Mark Thurston, was not moving and his skin had turned purple and mouth was frozen shut. Turner, currently the safety director at Army Central Command, grabbed a mouth-to-mouth resuscitation device from a nearby first aid kit and pried open Thurston's mouth. "I was able to get his mouth open, get the tube in there and then blow into his chest while the other guy did compressions," Turner said in a recent interview. SAFETY FIRSTLong before he found himself on this flight, Turner had spent over 30 years in the Army. He retired in 2004 after serving as an 82nd Airborne Division command sergeant major in Afghanistan. He now travels throughout the Middle East to help reduce risks across ARCENT's area of operations. On June 27, he was flying home from a work trip in Florida where he attended safety meetings at the U.S. Central Command headquarters. Safety has been paramount throughout Turner's life.In the military, he attended several CPR and combat lifesaver courses like many other Soldiers do. He was also a Ranger instructor, responsible for his students who sometimes got hurt or passed out from the grueling tasks. "If someone goes down, you got to be able to administer basic lifesaving skills," he said.Turner recalled that while he and other Soldiers were in Rhode Island for paratrooper training in 1980 they came across a car that had just crashed into a tree on a nearby road. They stopped, got out and saw two teenagers pinned inside the vehicle. Turner attended to the driver, a girl whose chest was pressed up against the steering wheel. After he pulled her out, he performed CPR on her until emergency crews arrived. About a month later on Thanksgiving Day, Turner received a heartfelt letter in the mail. "I received a letter from the mother thanking me for saving her daughter's life," he said, "and as a result of that she was able to spend Thanksgiving with her daughter."FLIGHT TO COLUMBIA After a short time performing CPR, Turner began to feel a faint pulse from Thurston. "Every once in a while we would get a pulse, but then it would go out," he said.Turner continued giving lifesaving breaths to Thurston as the other passenger did the chest compressions. He also tilted Thurston's head back to open up his airway. About 15 minutes later, emergency medical technicians arrived and used a defibrillator to electrically shock Thurston to life. His pulse grew steady, he took breathes on his own and he was rushed to the hospital. The diagnosis: a massive heart attack. That hit close to home for Turner. In 2012, Turner's wife convinced him to get a thorough physical. Once the stress test and other data came back, the doctor told him he had three blocked arteries. At first, Turner said he couldn't believe it since he was an avid runner and ate healthy. He later discovered his collateral blood vessels near his arteries had grown to compensate for the blood flow. "So I had no problems," he said, "but in order to fix it they had to go in and do a triple bypass on me." Thurston, now back from the hospital, called Turner and invited him to his home near Columbia on Tuesday so he could thank him in person. "He wanted to give me a hug and sit down and talk to me," said Turner, who considers himself a quiet professional who sought no gratitude for what he did. "At first, it was very emotional that one would do that."A little more than a month after his heart attack, Thurston said he is now walking, driving and expected to make a full recovery. If it wasn't for the quick action of Turner and the others on the plane, Thurston said it would have been a different story. "I was told later on by the doctors that had they not started CPR when they did, that would have been it. I would not have survived," Thurston said. "They seriously saved my life."Turner said he just reacted instinctively, using what he had learned as a Soldier. "All those skills and training that I had just kicked in automatically," he said. "That was amazing to me. I never really thought about it until it was over. We were able to save this gentleman's life and there were no previous rehearsals or anything."