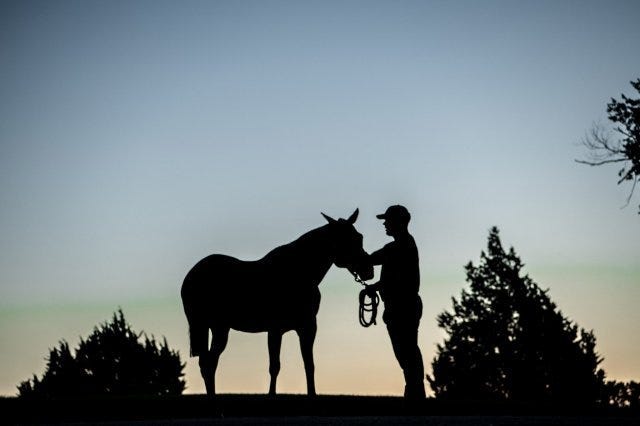 FORT SILL, Okla. -- Early in the morning, before the sun even had a chance to break the Oklahoma horizon and spread its rays, the Soldiers assigned to the Fort Sill Artillery Half Section here are already at work mucking stalls, grooming horses, and training for their next event.The Half Section is a special ceremonial unit responsible for carrying on the traditions of horse-drawn artillery from the era of World War I and was established at Fort Sill in 1963.Throughout the year, the unit attends numerous ceremonies, parades, rodeos, and other events in historically accurate attire, preserving the proud history of the field artillery."The Soldiers I receive at the Half Section do more than just shovel manure," said Gerald Stuck, chief of the Fort Sill Artillery Half Section. "They learn in depth about the role field artillery has played in our history. They pay tribute to the Soldiers who came before them by wearing nearly the same uniforms they wore. They study up on the wars and conflicts that shaped us as an Army, so when presented questions by onlookers they can answer with confidence."In addition to performing at events, Soldiers assigned to the Half Section are also entrusted with looking after and caring for several horses, each with their own unique personality."When I say the horses have their own personality, I mean it," laughed Sgt. Robert O'Steen, Half Section noncommissioned officer in charge, who's assigned to the 15th Transportation Company, 100th Brigade Support Battalion. "We have our playful horses, our uptight ones, and even an alpha. It's up to us to learn and adapt our behavior to each horse specifically to build that connection needed and earn their trust."O'Steen went on to say that although the horses are not assigned to specific Soldiers, they always seem to pair with a Soldier with a similar personality.The Half Section is a yearlong additional tasking that places Soldiers on orders to the section and provides Soldiers from all over Fort Sill an opportunity to develop not just as Soldiers, but as leaders."I've learned a lot here at the Half Section," said Spc. Randy Rogers, a Soldier assigned to 1st Battalion, 14th Field Artillery. "Not only have I had a chance to build upon my leadership abilities by being placed in charge of training Soldiers and rehearsing for events, but I've also been fortunate enough to learn trades like leather working and how to take care of the horses by (Mr. Stuck)."Once Soldiers have completed their time at the Half Section, they bring back to their units a years' worth of unique experiences that could greatly improve upon their professional development and leadership potential as well as the Soldiers they may mentor and train.So the next time you find yourself on Fort Sill, be sure to take the time to visit the Soldiers and horses of the Fort Sill Artillery Half Section and learn more about the history of the artillery within the Army and how, with help from our four-legged friends, we became the world's most lethal fighting force.