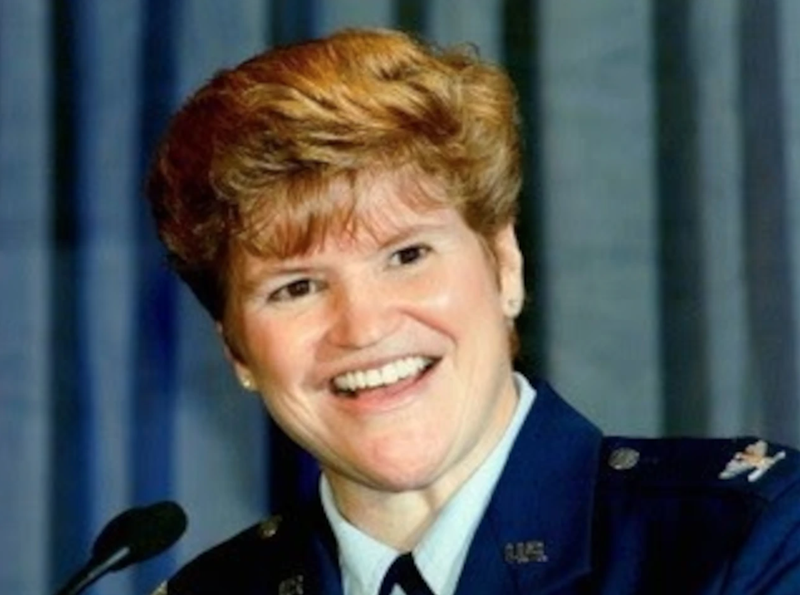 Retired Air Force Gen. Janet C. Wolfenbarger graduated from the Air Force Academy in 1980 as a member of the charter class of 157 women in a class of approximately 1,500 cadets. Of those 157 women, 97 graduated.

She remembers when her father, an Air Force pilot, came home from work one day and told her then-President Gerald R. Ford signed a law allowing women to enter the military academies for the first time in history. She applied and was accepted to the Air Force Academy in Colorado Springs, Colorado, in the spring of 1976.

While most upperclassmen were not appreciative of women entering the academy in 1976, she noted that if it had not been for the men in her charter class, the women could not have made it through that difficult experience without their male classmates' support.

''I believe those who opposed women coming in were actually fearful that with women being introduced, the program standards of the AFA would be lowered,'' Wolfenbarger said, adding that she and the other women in her class spent four years proving the standards did not have to be lowered. ''We proved that women can not only survive, but thrive, in that very stressful environment.''

The general said she cannot put a value on her Air Force career beginning with her time at the academy. ''My experience at the Academy taught me that I am far more capable than I ever thought I could be. And that knowledge brought with it a confidence in myself that I have relied on ever since. It was also a huge milestone for women,'' she said.

Wolfenbarger said she learned at the academy the most powerful way to appreciate good leadership was to observe. The leaders who inspired her were the people she wanted to emulate, she explained.

Wolfenberger said she was aware of the Defense Advisory Committee on Women in the Services from the time she was a cadet, and she agrees with DACOWITS member Janie Mines — the first African American woman to graduate from the U.S. Naval Academy — on the importance of giving back.

The retired general said she has seen ''huge change'' in her three and a half decades of active-duty time, and great progress in a host of areas for women in the services. The number of Air Force women almost doubled in size during her career, she noted, with all previously all-male career fields being entirely open to women now.

''And with the breaking of the glass ceiling, you could say, women are now serving at all ranks up and down the chain, both officer and enlisted,'' Wolfenbarger added.

''When I first came into the academy in the mid-70s,'' she said, ''there were still executive orders on the books that allowed the military services to separate women involuntarily should they become pregnant or become a mother through adoption or having a stepchild. Today the services authorize both primary and secondary caregiver leave. So women no longer need to choose between a military career and having a family. There's been huge progress in my lifetime.''

The highlights of her career are bookended, Wolfenbarger said: Graduating from the academy in the first class with women, and ultimately becoming the Air Force's first female four-star general. Her career achievements were significant.

Wolfenbarger ran the Air Force Materiel Command — a major command with 80,000 people, and an annual budget of about $60 billion every year for critical missions such as science and technology, lifecycle management, test and evaluation and supply chain and depot maintenance.

Wolfenbarger currently serves as the longest tenured Chair of DACOWITS. Regarding the important work the committee is chartered to do, she says, ''While I saw great progress during my active duty career, it's important to note we're not done. …There is still work to be done embracing policies and changes to our systems that ensure the fair and balanced treatment of women across the military services.''

She goes on to say, ''The real imperative here as you look at the talent pool this country has to offer, is it's a national security need for us to gain as much of that talent as we can. And if we're not able to attract a fair percentage of women, who make up more than 50% of our demographics in this country, we are hurting ourselves from a national security perspective.''