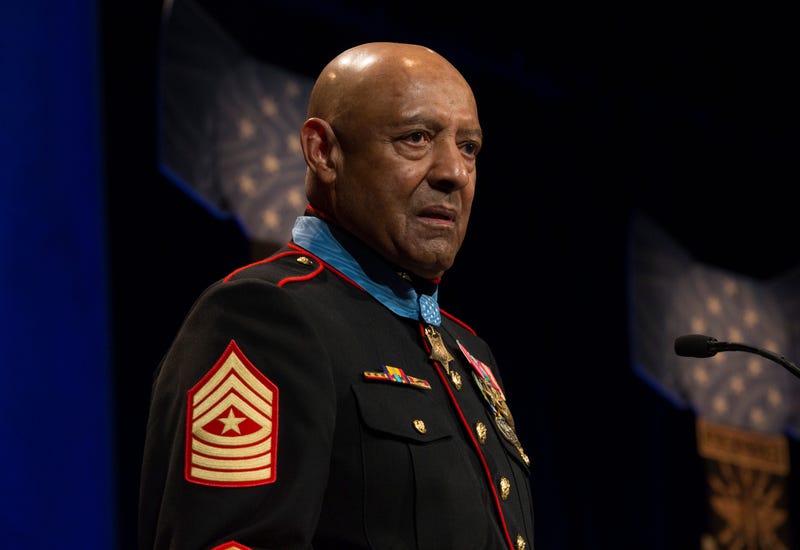 Canley was awarded the nation’s highest honor 50 years after his actions serving as Company Gunnery Sergeant, Company A, First Battalion, First Marines, First Marine Division in the Republic of Vietnam from January 31 to February 6, 1968 during the Battle of Hue City.

“To honor the remarkable Vietnam generation on this 245th birthday of the United States Marine Corps, ESB-6 will be named USS John L. Canley to honor a man who has exemplified all that has made our service strong, and our Nation thrive,” said Braithwaite. “Then-Gunnery Sergeant Canley led his men through the Battle of Hue City, going above and beyond the call of duty as he carried wounded Marines to safety and drove the enemy from a fortified position. His courageous actions resulted in the award of the Medal of Honor, as well as the enduring gratitude of our Nation.”

While serving as Company Gunnery Sergeant, Canley fought off multiple enemy attacks as his company moved along a highway toward Hue City to relieve friendly forces who were surrounded. On several occasions, despite his own wounds, he rushed across fire-swept terrain to carry wounded Marines to safety.

When his commanding officer was severely wounded, he took command and led his company into Hue City. While in command of the company for three days, he led attacks against multiple enemy-fortified positions while exposing himself to enemy fire to carry wounded Marines to safety. On Feb. 6, at a hospital compound, he twice scaled a wall in full view of the enemy to aid wounded Marines and carry them to safety.  Canley's heroic actions saved the lives of his teammates.

Canley was originally awarded the Nation’s second highest honor, the Navy Cross, for his action during the Battle of Hue City, but this was upgraded to the Medal of Honor, which was presented October 17, 2018 during a ceremony at the White House.

“ESB vessels will deploy Marines of the future carrying the name of Marines of the past,” said Braithwaite. “They are leaders who truly embodies our core values of honor, courage and commitment, and the future crew of USS John L. Canley, both Sailors and Marines, will carry on his legacy, character and professionalism throughout the lifespan of this vessel.”

The ESB ship class is highly flexible that may be used across a broad range of military operations supporting multiple operational phases, similar to the Expeditionary Transfer Dock class. Acting as a mobile sea base, they are part of the critical access infrastructure that supports the deployment of forces and supplies to provide prepositioned equipment and sustainment with flexible distribution.

USS Lewis B. Puller (ESB 3), the first Expeditionary Sea Base delivered, along with follow ships Hershel "Woody" Williams (ESB 4) and Miguel Keith (ESB 5), are being optimized to support a variety of maritime-based missions, including Special Operations Forces and Airborne Mine Counter Measures.