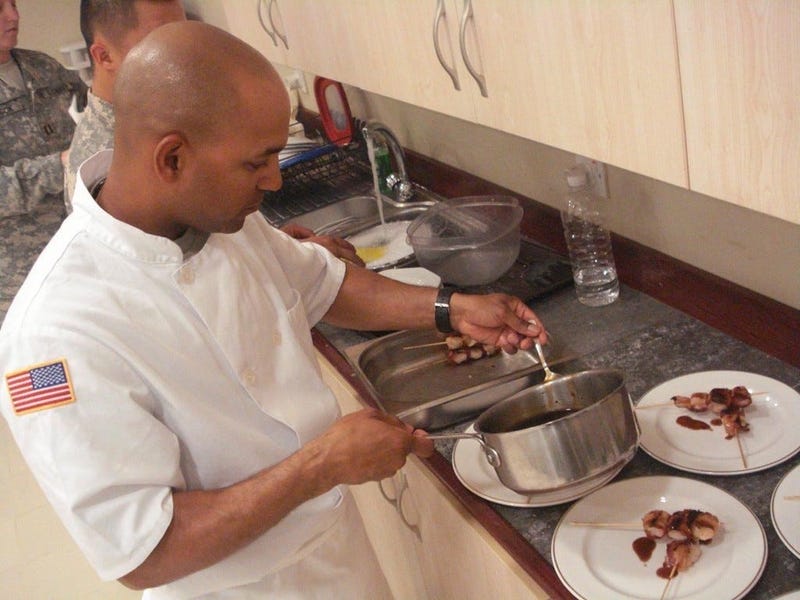 As a young professional chef with bills to pay, Master Sgt. Rafeal Nevarez’s father told him it might be time to join the family business, the U.S. Army. Nineteen years later, Nevarez serves as the enlisted aide to a four star general at one of the Army’s four major commands.

“I said I would join for four years, but 19 years later here I am,” said Nevarez enlisted aide to Army Materiel Command commanding general, Gen. Ed Daly. “The Army was just too easy. I provide support and assistance to Gen. Daly primarily through upkeep of the official entertaining areas of his assigned quarters, uniform maintenance and support to social events, including planning and catering. My daily duties allows Gen. Daly maximum time for accomplishing his missions, which includes caring for the Soldiers and their Families.”

An Army culinary specialist, Nevarez’s career and life experience before he enlisted enabled him to jump right into his craft. His first assignment was as an Army chef at Fort Eustis, Virginia, where he was also selected to serve on the Culinary Arts Team and competed against other Army chefs.

“The Army works to sharpen our skills,” he said about competing both nationally and internationally as a part of Culinary Arts Teams throughout his career. “I’ve been exposed to so many different cultures, spices and flavors. I’ve also gone to the Culinary Institute of America and have learned under professional chefs, including Bobby Flay and Emeril Lagasse.”

Continual training and learning new skills is important to Nevarez and other culinary arts specialists. He said throughout his career, different Army mentors have provided him guidance and leadership - something he wants to do in return for young Solders.

“Building the next generation is important. I work hard to find the youngest Soldier and expose them to the culinary arts,” he said. “Taking a person that is raw and never worked in the culinary arts, training them and watching what they can accomplish is like nothing else.”

PHOTOS: It’s Army versus Navy in the battle of the Valentine’s Day cakes

Nevarez hopes his next assignment will take him to the food service battalion where he can train, lead and mentor the next generation in the culinary arts and enlisted aide world.

“They are the future of the Army, and there is lots of career potential and programs available our Soldiers don’t know about,” he said. “Our Army is based on young leadership, and it’s our job to mentor, coach and train them.”

When his oldest son decided to follow in his father’s and grandfather’s footsteps and join the Army, Nevarez asked him to think about where he wanted to be and what he wanted to do.

“Every job available in industry, we do in the Army. From computer science to logistics, there are a variety of careers open to anyone,” he said. “I told my son the Army will take from you as you give to it, but the Army is always giving you more back in return. I’ve turned four years into 19 years, and I have a career where I and those around me will never go hungry.”