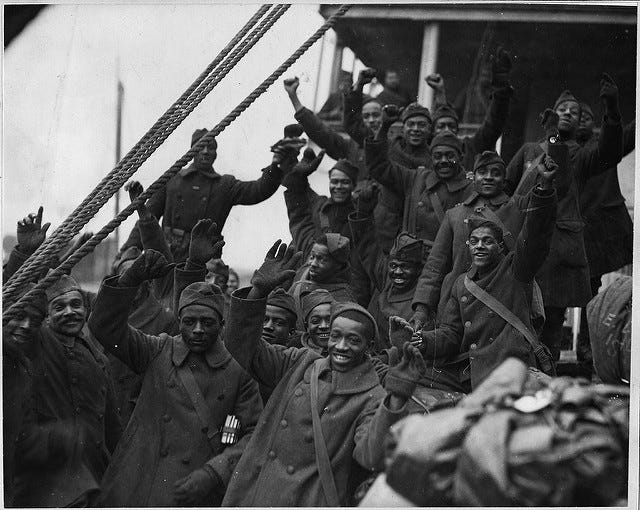 Of the some 400,000 African Americans who served in the First World War, only two were awarded the Medal of Honor and while many other African American soldiers fought with distinction, they're service was often overlooked because they were black, according to military experts and historians.

Many minorities served in the ranks during World War I but racism forced them to serve in segregated units. These segregated units often fought alongside the French forces and rather than be considered for the Medal of Honor, their acts of valor were awarded a Distinguished Service Cross or French Croix de Guerre with palm.

Until now, there has been no systematic review for these minority veterans. The World War I Centennial Commission recently established a Valor Medals Review Task Force dedicated to reviewing the service records of minority service members who fought in World War I in the hopes of awarding those deserving of the Medal of Honor, regardless of the color of their skin.

While the review of WWI minority records is the first of it's kind, the Pentagon created a similar process in the 1990s to review the actions of African American soldiers from World War II who would be deserving of the Medal of Honor. The U.S. Army's official report revealed that although no official documents proved racial bias, the racial climate contributed to the improper recognition of these soldiers. As a result, seven African American soldiers were posthumously awarded the Medal of Honor.

These seven veterans, along with Corporal Freddie Stowers and Sergeant Henry Johnson, African American recipients of the Medal of Honor from WWI, were motivation for the task force to dig deeper. These landmark victories for the military and minority community inspired the organization to challenge the previous postwar review of World War I cases.

Retired Army Major General, Christopher Leins is part of the task force. As a veteran and WWI historian, this is an opportunity for him to learn and share more about military history.

"I used to read the stories of German POWs in the American South were treated better than African American soldiers going off to combat," said Leins. "So for me, it's the journey of learning their stories and their sacrifices and yet they're willing to still fight valiantly for the country and move us more toward today where we're a fully integrated military."

According to Leins, of the 400,000 African Americans who served, 40,000 were in combat units. The rest served in integral support units like supply, graves registration, and barracks maintenance.

"What we need now is an official request from either through Congress or from the DoD that formalizes the effort," said Leins.

Read Also: They served before they could vote: The Hello Girls

During the First World War, 223 women, often referred to as the "Hello Girls", were instrumental in making communication for the American Expeditionary Forces possible. They operated telephone switchboards, connecting over 26 million calls by the end of the war.

The World War I Centennial Commission, established in 2013, raises awareness of WWI through various projects such as establishing a World War I memorial in Washington D.C. and developing digital programming for children to educate them on the history of the First World War.

This story was originally published October 2018