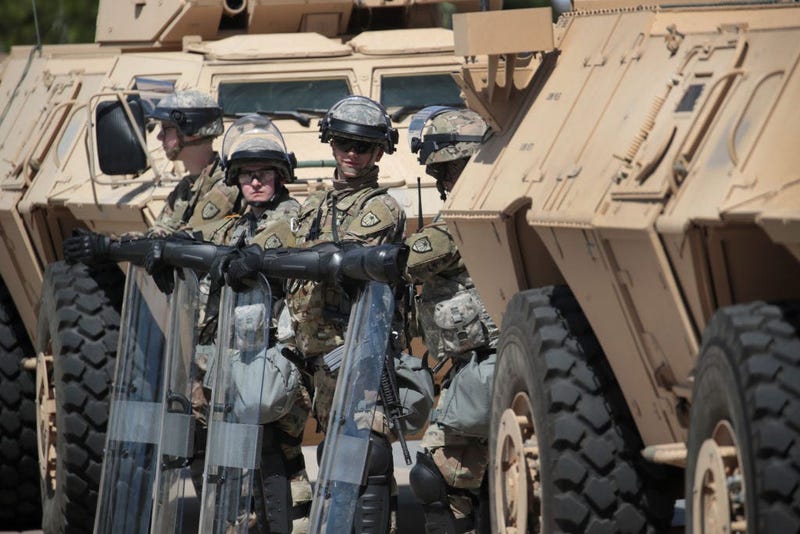 Thousands of National Guard troops have been called up to supplement state and local police in Minnesota, the largest domestic deployment in the state's history. And now, a general says some will be armed and carrying ammunition.

Members of the Guard deployed to Minnesota will be equipped with rifles, sidearms and ammunition because of a "credible threat" against them, according to the FBI, Army Maj. Gen. Jon Jensen said in a news briefing held by phone. Jensen is adjutant general of the Minnesota National Guard.

"Our soldiers are currently carrying ammunition in their magazine pouches," Jensen said on the call Sunday.

It's unclear what exactly that additional measure will mean, though.

"We don't talk about rules of engagement," Jensen said, but added that in general, the Guard troops "cannot greatly exceed the force" threatening them.

Those Guard troops are not carrying stun guns or rubber bullets or pellets, the less-lethal means used by some local law enforcement.

The general gave no details about the threat to the Minnesota National Guard, which was reported by the FBI.

The number of National Guard troops on the ground in Minnesota could increase to nearly 10,000, USA Today reported, though so far about 2,000 are on the ground to respond to protests and riots.

The National Guard Bureau previously said that about 5,000 Guard troops had been activated as of Sunday, "in response to civil disturbances in 15 states and the District of Columbia, with another 2,000 prepared to activate if needed ... those numbers can change rapidly ... Guardsmen live in the communities they serve and are there to protect their neighbors' right to protest peacefully."

Other Guard forces have not received the same threats, said the adjutants general of Georgia and Colorado, who were also on the call.

Colorado Guard troops have batons, stun guns, shields and pepper spray, Loh said, adding that "we have not had to use any of those."

Carden did not say what the Georgia Guard are equipped with other than the sidearms.

"I primarily go with sidearms," he said of Guard members sent to Atlanta and Savannah.

None of the generals on Sunday's call said they felt active-duty troops needed to be activated in those states, where they said local law enforcement was dealing with the protests.

"At this time, we have not asked for the Department of Defense to give us active-duty forces to support this operation," Jensen said.

"The Secretary of Defense and the chairman have personally spoken with Gov. Walz twice in the last 24-hours and express the department's readiness to provide support to local and state authorities as requested," Pentagon spokesman Jonathan Rath Hoffman said in an emailed statement. "Currently, the governor is fully activating the Minnesota National Guard and is working with neighboring states for more potential support. At this time there is no request by the governor of Minnesota for Title 10 forces to support the Minnesota National Guard or state law enforcement. As a prudent planning measure, the department has directed U.S. Northern Command to increase the alert status of several units should they be requested by the governor to support Minnesota authorities. These are units that normally maintain a 48-hour recall to support state civil authorities for several contingencies (like natural disasters) and are now on four-hour status.”

The Guard generals did say it was possible that help from other National Guard forces in other states may be needed if protests and riots continue.

"We in America should not get used to or accept (activating the National Guard) to secure people in the United States of America," Carden said. "This is a sign of the times that we need to do better in our country."

Pentagon puts military police on alert to go to Minneapolis