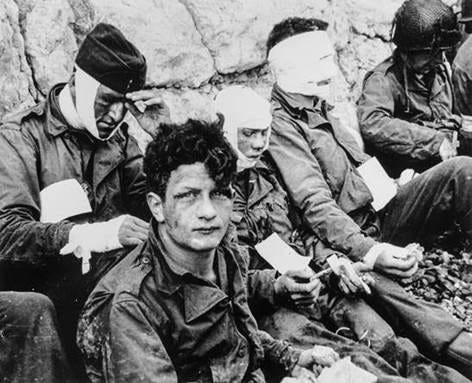 Both the Smithsonian Channel and National Geographic are premiering special content in recognition of the 75th anniversary of D-Day — and some of it, we've never seen before.

The Smithsonian Channel's documentary "The Battle of Normandy: 85 Days in Hell" premieres Thursday, June 6 at 8 p.m. ET/PT to commemorate the 75th anniversary. Dominique Forget, a Normandy native and one of the world's most foremost experts on World War II identified over 100 hours of previously unseen archival footage, including 20 hours of footage from the battle itself.

But the battle on the beaches of Normandy on June 6, 1944, was just the beginning. The struggle to win Normandy went on for 85 days. Co-writer and co-producer Forget, meticulously pieced together the story of these 85 days.

For a sneak peek of "The Battle of Normandy: 85 Days in Hell," click here.

National Geographic's D-Day coverage spans the entire first week of June. The D-Day Marathon started on Monday, June 3 and continues throughout the entire week including specials such as "Eyewitness: D-Day" and "The King Who Fooled Hitler."

All specials air globally in 172 countries and 43 languages on National Geographic.

EYEWITNESS: D-DAY Tuesday, June 4, at 9/8c One famous day. Five heroes. Five key turning points that changed the course of World War II during the D-Day landings, told through the eyes of the people who made a difference. Using rarely seen archive footage, dramatic reconstruction and written accounts from eyewitnesses and personal testimony from five heroes, this is D-Day as never seen before.

THE KING WHO FOOLED HITLER Wednesday, June 5, at 9/8c This landmark film unearths exclusive new documents — secret letters, correspondence and diary entries — about D-Day that shed new light about the deception that fooled Hitler. In a tale of double agents and decoys, the investigation reveals for the first time the identity of the most secret agent of them all: King George VI. It also uncovers how the queen and future Queen Elizabeth II were enlisted in the ruse, and how the royal household managed to lose one of Britain’s greatest secrets of World War II.

D-DAY SACRIFICE: BATTLE FOR FREEDOM Monday, June 3, at 8/7c In the spring of 1944, the Allies rolled the dice and changed the whole fate of World War II on a single day. On the 75th anniversary of D-Day, National Geographic revisits the Allied forces’ June 6, 1944, Normandy landings and the ensuing 100 days leading up to the liberation of Paris from the Nazis.

AFTER HITLER: SPOILS OF WAR Tuesday, June 4, at 8/7c May 8, 1945: World War II has finally ended and the world is celebrating the defeat of Nazi Germany, but the celebration is short-lived. A shattered Europe has to rebuild, heal its wounds and deal with the fallout from an interminable and barbarous conflict while sketching the outlines of its future. For many civilians, the aftermath of the war is even more brutal than the conflict itself.

HITLER YOUTH: NAZI CHILD SOLDIERS Tuesday, June 4, at 10/9c In 1930s Germany, the Nazi Party created the Hitler Youth to indoctrinate children and adolescents with Nazi ideology and prepare them to become a child army for Hitler. The first program traces the rise of the movement through to the war. The second program starts at the height of World War II and traces the story of the Hitler Youth as they face defeat.

INSIDE WWII: BEHIND ENEMY LINES Wednesday, June 5, at 7/6c Day by day. Hour by hour. Second by second. This is the story of last century’s bloodiest conflict told in a concise and compelling three-hour special. Including personal accounts, strategic analysis and rare footage, the special provides a new and intimate perspective on the experience of war.

NAZI MEGASTRUCTURES Across three nights, beginning Wednesday, June 5, at 10/9c High-tech superguns. Weapons of mass destruction. In the quest for world domination, the Nazis built some of the biggest and deadliest pieces of military hardware and malevolent technology in history. These weapons changed the face of modern warfare forever. Witness the hidden remains of Hitler’s most ambitious projects and hear the stories of the engineering geniuses who designed them.

MAKING A DICTATOR Back-to-back nights, beginning Wednesday, June 5, at 11/10c A growing threat to democracies appears in the force of dictatorships. Dictators like Adolf Hitler, Saddam Hussein, Augusto Pinochet, Mobutu Sese Seko and Fidel Castro found their way to power through similar methods. The special examines the brutal methods and common practices implemented by each dictatorship, along with the ways in which the dictators corrupted the countries they claimed to improve.