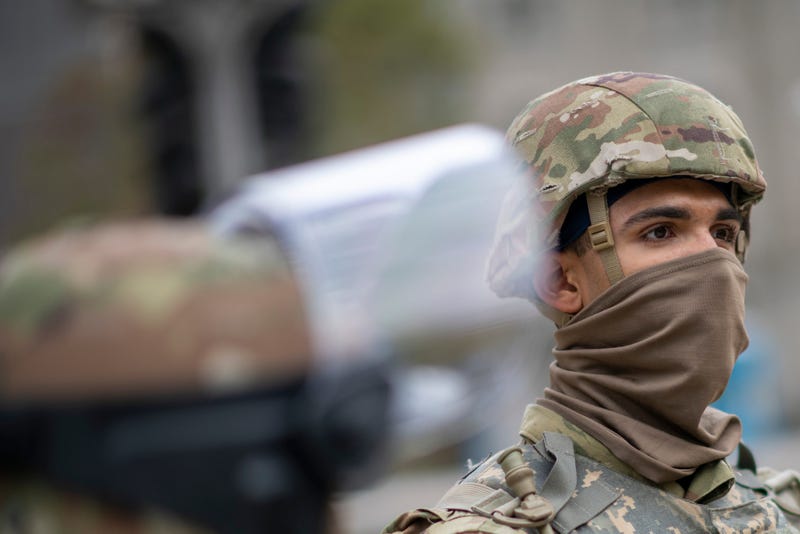 Between sweeping civil unrest across the country and the COVID-19 pandemic, the National Guard has been more visible than in past years -- so its involvement in the election may seem as if it's increased this year. But National Guard troops have supported elections in one form or another since the very beginnings of United States history.

For the 2020 election, Guard troops across the country are expected to provide election support as civilian-clothed poll workers, polling place sanitizers, cybersecurity support and in response to civil unrest. In some states, the National Guard has been assisting at the polls for months -- usually out of uniform and unarmed. COVID-19 has resulted in a shortage of poll workers in states like Wisconsin, and the National Guard, on the governor's orders, has filled in the gaps.

All in all, more than 30 states reported plans to use National Guard members in state active duty status to provide election support. That's a lot -- but the increase in Guard activity is largely attributed to the nation's fight with COVID-19.

In past years during which unusual crises coincided with election activities, the Guard was similarly crucial in making sure voters made it to the polls. In 1992, the Florida National Guard helped establish and operate temporary polling places in tents in the wake of Hurricane Andrew. That same year, soldiers from the Hawaii Army National Guard provided tents and transportation assets to Kauai County polling officials in the wake of Hurricane Iniki for the state’s primary election. And in 2012, the New York National Guard provided infrastructure support for voting machines during Hurricane Sandy.

The Guard's involvement with protecting the vote doesn't stop at hurricanes and goes as far back as the 1830s.

By the 1830s, preserving public order became the most common and consistent mission of state militias, the slightly less organized ancestors of the National Guard, during elections. During the election of 1868, the Tennessee State Guard protected the polls in Nashville and throughout middle Tennessee. In the wake of increasing terrorist activity by unlawful militias throughout North Carolina in 1870, the 1st North Carolina State troops guarded polling stations during the state elections. State militias in Texas and South Carolina, in 1870 and 1871 respectively, also protected the polls during elections, serving a dual mission of preserving order and protecting citizens’ right to vote.

In the early 1900s, the modern National Guard was established through a series of militia acts. The organization that emerged from that legislation became the professional and bipartisan institution that is today's National Guard and enhanced the size and role of the state-based military units. And these newly-organized institutions continued supporting election activities throughout the 1900s.

In New Mexico in 1924, more than 150 Guardsmen responded to the governor’s orders to ensure proper counting of votes after reports of rampant voter intimidation. On Election Day in Williamson County, Illinois, nearly 100 Guardsmen secured polling sites and conducted patrols to protect voters. And in November 1930, the New Mexico National Guard once again deployed troops to protect ballot boxes in Las Vegas.

Now, in 2020, the Guard's role in elections has evolved -- and so have the statutes governing that role.

While concerns have risen around President Donald Trump's past efforts to send federal powers into states where they are not wanted such as in Portland, Oregon earlier this year, clear statutes prevent anything similar from happening on Election Day.

And, as far as has been reported in the past several decades, Guard troops have never abused their role at the polls.

"There are numerous safeguards against someone abusing their role at a polling site, including election laws and other directives – key among those are the Hatch Act, 18 U.S.C. 592, and DoD Directive 1344.10," National Guard officials added in a statement. "The aforementioned statutes have proven remarkably successful in preventing a military presence from impacting voters and impinging on impartial election conduct."

But what about after election day?

Again, the decision remains up to state leadership -- not federal. Similar to National Guard activations in response to civil unrest following the murder of George Floyd in May, governors can call on the Guard for assistance. And the Guard -- as it is with all missions -- is ready to answer those calls.