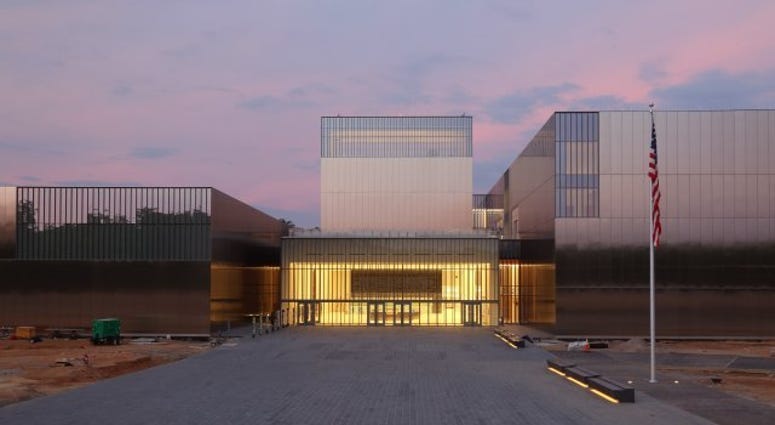 The National Museum of the United States Army celebrated its grand opening Wednesday with a virtual ceremony.

“This grand opening is particularly fitting to occur on Veterans Day when we salute the sacrifices of those who have served,” said Army Secretary Ryan D. McCarthy.

Located on Fairfax County Parkway just outside Fort Belvoir, Virginia, about 17 miles from the nation’s capital, the museum is a joint effort of the U.S. Army and the non-profit Army Historical Foundation, which constructed the building through private funds. The U.S. Army provided the museum’s infrastructure, roads, utilities, and exhibit work.

“This museum is a giant tribute to 30 million soldiers who have served throughout our nation’s history,” said Chairman of the Board of the Army Historical Foundation retired Gen. Gordon Sullivan.

The museum had planned to open earlier this year, but the coronavirus pandemic prevented that.

Limited to about 80 words, individual Soldiers' Stories of service lead visitors into the museum through a promenade to the glass-fronted galleries.

Army Chief of Staff Gen. James McConville said the museum fills him with "perfect pride” in being a soldier.

“Every soldier has a story,” he said. “The Army Museum is the home of those stories."

The facility’s galleries tell the story of the founding of the nation through the Civil War, World War I, World War II and the Cold War. The last gallery is called Changing World, which covers the period roughly from 1990 to now.

“We can not truly appreciate the sacrifice of our soldiers or comprehend what they went through without seeing the weapons they used, feeling the uniforms they wore or reading the letters they wrote,” said Chairman of the Joint Chiefs of Staff Gen. Mark A. Miley.

“As the beneficiaries of their sacrifice, it is our responsibility to preserve and protect their memory,” added acting Defense Secretary Christopher Miller.

The experiential learning center allows visitors of all ages to participate in hands-on, educational and team-building activities in the areas of geography, science, technology, engineering and math.

Enhanced health and safety measures will be in place for visitors. Free, timed-entry tickets are required to manage visitor capacity and provide an optimal experience.

Want to get more connected to the great stories and resources Connecting Vets has to offer? Click here o sign up for our weekly newsletter.