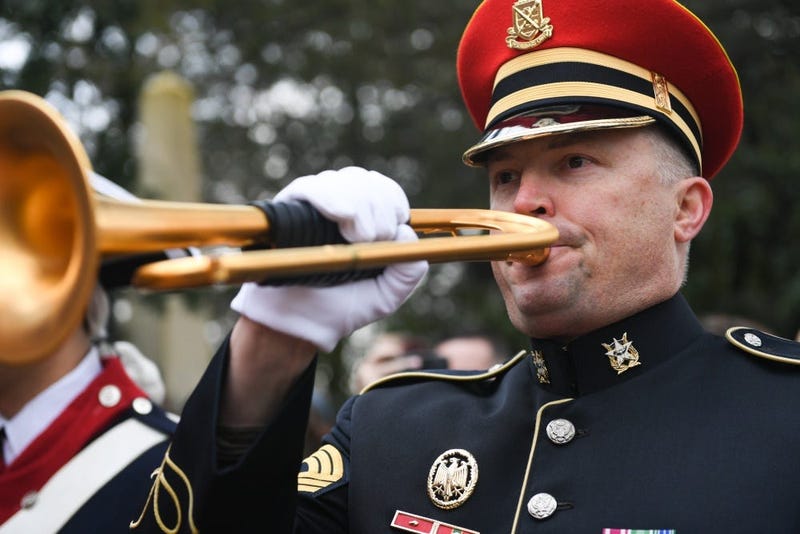 Thomas Sneeringer made a vow several years ago when he realized the bugler at his dad’s funeral wasn’t actually playing “Taps,” but merely holding the horn to his lips while a device inserted into the bell of the instrument was playing the melody.

“I felt it was not enough and vowed then to see what I could do to keep that from happening for others,” he said.

Sneeringer soon discovered that there is a nationwide shortage of buglers and because of that "Taps" was not being performed live at many veteran funerals. That didn't sit well with Sneeringer, who felt that veterans deserved better. After doing some online research, he found Bugles Across America and became a volunteer. The non-profit organization has more than 4,000 volunteers in all 50 states who play "Taps" at veteran funerals.

Tom Day founded Bugles Across America in 2000, when Congress passed legislation stating that veterans are entitled to have at least two uniformed service members fold the flag and “Taps” played on a CD at their funerals. Day, like Sneeringer felt deceased veterans deserve a live rendition of "Taps" by a real bugler.

“`Taps' is played out of respect for the dead — both those who have made the ultimate sacrifice in giving their life for their country and countrymen, but also for those who served, survived and then passed away,” he said. “We feel that the live playing of `Taps' is the appropriate form of respect.”

Volunteer buglers can play a traditional bugle with no valves, or they can complete the ceremony on a trumpet, cornet, flugelhorn, or a 1, 2 or 3 valved bugle.

“The bugler can be of any age as long as they can sound `Taps' with an ease and style that will do honor to both the veterans, their families, and the burial detail performing the service,” Sneeringer continued. “There are no fees or dues to participate as a volunteer, although there are certain directives that must be followed.”

Since the Department of Veterans Affairs is expecting more than 500,000 veterans to pass every year for the next seven years, Bugles Across America is always recruiting new volunteers.

Interested volunteers much first audition. If you make the cut volunteer buglers receive frequent emails of all the opportunities in his or her area.

“Funerals, of course, come with very little lead time,” Sneeringer said. “Other events might be weeks or months down the road.  I believe anything within 100 miles is brought to the volunteer’s attention.”

Sneeringer, who lives in Washington, D.C., said he has played at a variety of events.

“I have played at a memorial service for a recently departed vet, a ceremony at an American Legion post honoring the memory of the Four Chaplains who gave up their life vests on a sinking boat in World War II, an honor flight of vets coming to the WWII Memorial on a gloriously beautiful Easter morning."

And, about that vow Sneeringer made to his dad?

“I returned to Dad’s gravesite and gave him a private recital,” he said.