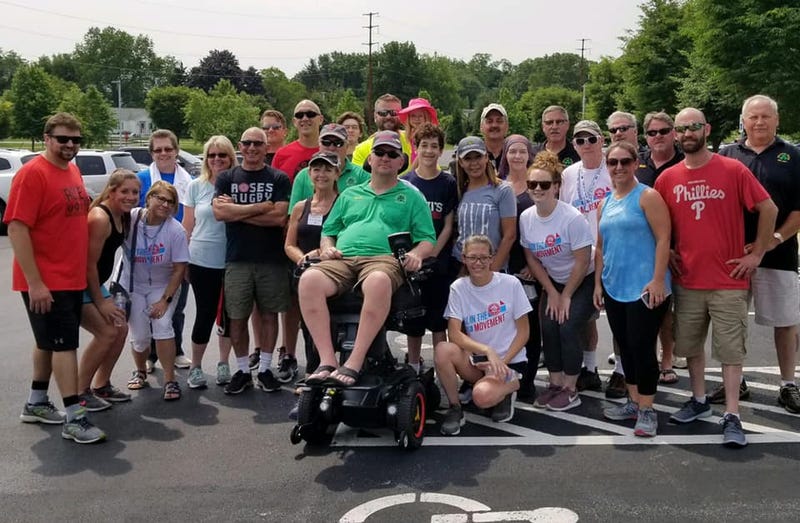 Navy veteran Mike Deeley spends his days battling an enemy he knows he can’t beat while helping others who suffer from amyotrophic lateral sclerosis or ALS, the same disease he's been diagnosed with.

Deeley, a former Aviation Technician Third Class, served in the Navy from 1988 to 1992. Following his military service, he went on to become a renowned power lifter and semi-pro football player. He spent a decade on the pitch for the Roses Rugby team in Carlisle, Pennsylvania before his ALS diagnosis in 2016.

Also known as Lou Gehrig’s Disease, ALS is an incurable neurodegenerative disease that takes away a person’s ability to walk, dress, write, speak, swallow and eat. According to ALSA.org,  the majority of those with ALS die within two to five years of diagnosis.

While Deeley said he gets the care he needs through the Veterans Administration, he knows others aren’t as fortunate.  That spurred him to put together fundraisers and to lobby for increased ALS funding through the Department of Defense.

“Most people who have ALS don’t have the backing and support I get out of the military,” he said.

According to statistics provided by ALSA.org, since 2001, more veterans have lost their lives to the disease than those who have been killed while serving in Iraq or Afghanistan.

Deely first heard of ALS four years ago when the Ice Bucket Challenge went viral on social media.  In the challenge, a bucket of ice water was dumped over a person’s head either by themselves or another person to promote awareness of the disease and encourage research donations.

While around 30,000 people in the United States have the disease, Deeley called it a revolving door with a two to five-year lifespan for those who have been diagnosed with the disease.

“I understand the budgeting in the United States government,” he said. “I’m not expecting them to spend $1.5 million to take care of a veteran and $1 or $2 million for research. It doesn’t work that way. You’ve got to go by the numbers, and not that many people have ALS.”

By sharing his story, Deeley hopes to touch people’s hearts while increasing awareness about the disease and donations for research.

ALSA provides ramps, wheelchairs and other forms of assistance to those who are living with the disease.