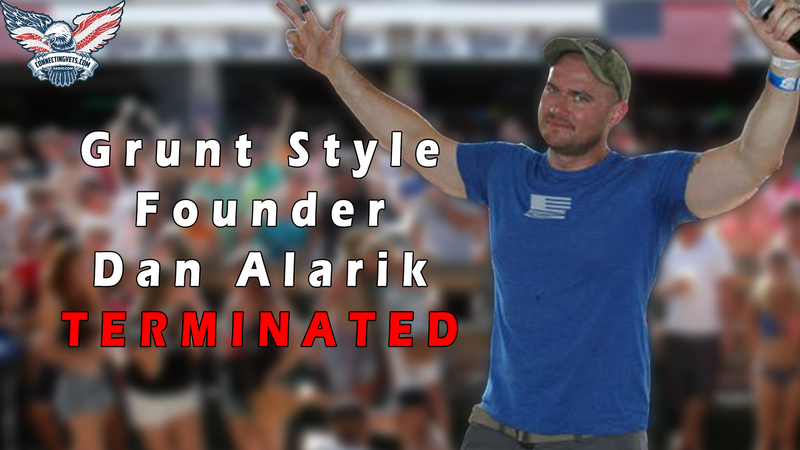 Dan Alarik, U.S. Army veteran and founder of the popular veteran apparel company Grunt Style, says that he and his wife were fired from the company they founded and left without health care. But in an official statement, the company denied his allegations.

"This is very humbling, and I need your help," Alarik wrote in a Facebook post on Monday. "Just recently I was terminated from the company that my wife and I founded for no given reason, which left us with no job, income or healthcare premium coverage. My wife still needs cancer treatments for at least 12 more months and one of our baby twins, Eli, has a need of special equipment. We need help with our healthcare costs. Please help by sharing our message.

Alarik linked to a GoFundMe the family set up to help support themselves.

The company itself initially did not comment on Alarik's allegations, even to confirm his removal, though it appeared as though any mention of Alarik or his likeness have been removed from the Grunt Style "About" and "Our History" pages of the Grunt Style website, with only a handful of workout articles left bearing his name.

Two days later, on Sept. 23, the company posted a statement on its Facebook page confirming his removal, but denying his other allegations.

"We were all shell shocked," the company wrote. "What started off as a private matter has entered into the public arena and you deserve some answers."

What followed in the post was a "timeline of events" the company explained, from a companywide "financial crisis that began years prior" to a sale of the company and Alarik stepping down as CEO in June 2019. Alarik became chairman of the company's board of directors and was involved in choosing the new CEO, Glenn Silbert, the company said in its statement.

Silbert came on board as CEO in February, the company said, and from February until August, Alarik was "pursuing other projects" unrelated to the company.

"Additionally, Daniel's participation and attitude towards many in the company deteriorated, creating a hostile environment for our team members," the company wrote. The company told Alarik he'd be terminated Aug. 31. On the day of his termination, the company said Alarik "emailed a 59-page manifesto to the entire company, undermining the leadership team."

Grunt Style said in its statement that on Sept. 2, the company offered Alarik and his family extended healthcare benefits 'while discussions continued," in contrast to Alarik's allegation that his and his family's health care was cut off.

The company also posted what appears to be a screenshot of a Sept. 2 email between the company and Alarik that reads, "Grunt Style is willing to pay for your health insurance for an indefinite period of time" until negotiations for his exit from the company concluded, as long as he agreed to terms. Names in the email chain are redacted, except for Alarik's, and all email addresses were also redacted.

In a response to that email, a message that appears to be from Alarik acknowledges the offer for "continuation of my health insurance" but said he didn't want negotiations to "get distracted with this and let's get a resolution done."

The company said it cannot comment on further "confidential points" but added that while company leaders respect Alarik, and he remains chairman of the board and the largest shareholder in the company, "we vehemently disagree with how this situation has been handled on his part and the continued damage he is inflicting on the brand."

After the company posted its statement, Alarik followed with another of his own.

"I absolutely refuse to share because it most likely would destroy the company and all the Goodwill that we work so hard to build for over a decade," he wrote. "There are so many good people there who believe in the mission and I refuse to sink down and get my hands dirty.

"I don't want the Grunt Style hurt ... there's good people there who still believe in the mission and I support them. Wholeheartedly Liz and I both do."

Alarik said the email the company posted was the company offering healthcare coverage only "if I would legally bind myself to never seek any type of justice for all the wrongdoings." Alarik didn't elaborate on the alleged "wrongdoings."

The company said Alarik sparked a boycott of the company "he founded and will eventually have a potential of making millions off of."

Company leaders said they did not want to "disparage" Alarik, but "cannot allow any more half-truths to be told."

"These tactics put in the livelihoods of nearly 300 employees and their families in jeopardy," the company's statement concludes. "This behavior and threat of boycott that has ensued has (sic) put strategic relationships intended to benefit many thousands of veterans at risk. We are more than just a T-shirt company. This We’ll Defend."

In comments on his initial Facebook post, Alarik said he explicitly did not want to discourage others from buying from the company.

"There are still good people there who rely on Grunt Style for their family," he wrote. "I just need help for my family. I'm not out for blood, but for safety of my wife and kids."

As people left comments of shock, support and advice for Alarik, he responded that he was "just as shocked" about the news.

In another comment, Alarik said he and his wife "cleaned out our closets" of Grunt Style merchandise, but added, "I don't want to hurt the company."

"I'm not out for blood I'm not out for vengeance I just want to take care of my family," Alarik wrote in his Sept. 23 Facebook post. "I'm wholeheartedly disappointed in the actions of the leadership and extremely grateful for that few that has supported my family's health journey."

Connecting Vets reached out to Alarik for details of his termination from Grunt Style but he declined the interview on advice from his lawyer.Learn more about Dan Alarik and Grunt Style from a 2017 interview by Rod Rodriguez with him on The After Action Review podcast.Connecting Vets reporter Abbie Bennett contributed to this story.
Follow Rod Rodriguez, @rodpodrod.
Subscribe to The Back Brief available everywhere you listen to podcasts and on YouTube.