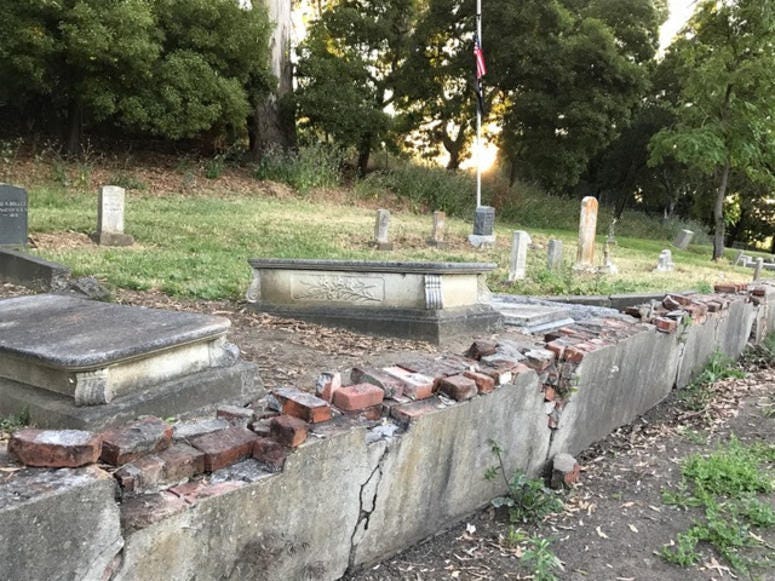 The story of Mare Island Naval Cemetery is a long one. The grassroots efforts to restore the historic site in Vallejo, Calif. started as far back as Sept. 2017 when Connecting Vets was the first national news organization to report on the dilapidated veterans cemetary. Now, as the newest Congress gets to work, new legislation has been introduced to move the upkeep for the cemetery to the Department of Veterans Affairs.

The dilapidated state of Mare Island Naval Cemetery first hit the news cycle when Russian diplomats replaced six headstones on the burial site of Russian sailors who died fighting a fire in San Francisco in 1863. Those brand new gravestones drew attention to the cracked, leaning, dirty markings over the other sites.

Officials in Vallejo, California, which controls land that was once the Mare Island Shipyard, could little afford to tend to the grave sites of U. S. Veterans in the 160-year-old Naval Cemetery.

An online petition on Change.org requested the Trump administration assume ownership of the decaying cemetery by fiscal 2020.

In February 2018, the City of Vallejo applied for the DoD's Innovating Readiness Training Program where military funds and manpower are used for the restoration of sites such as the Mare Island Naval Cemetery.

In April 2018, Rep. Mike Thompson (D-Calif.) introduced H.R. 5588 which directed the Secretary of Veterans Affairs to seek out an agreement with the City of Vallejo to transfer control of the Mare Island Naval Cemetery to the VA. In Aug. 2018, Sen. Diane Feinstein (D-Calif.) did similarly in the Senate.

To no avail. But the fight's not over.

This week, Sen. Feinstein and Rep. Thompson filed legislation that, again, aims to restore Mare Island Naval Cemetery to conditions that are respectful of the 860 servicemembers and veterans buried there.

“I think we have a pretty good chance of getting it done this time,” retired Navy Capt. Ralph Parrott told the Stars and Stripes. He's been involved with the effort to restore the cemetery since the beginning. “Our little band of merry, old men are trying to focus our efforts … We are going to be walking the halls of Congress to get as many senators and (other) members of Congress to sponsor the bill.”

“In its current state, the Mare Island Naval Cemetery is no longer a fitting tribute to the 860 veterans and their families that are buried there,” Feinstein said Tuesday in a statement. “This was originally a naval cemetery so it makes sense to transfer control back to the federal government to ensure its properly repaired and maintained. We need to restore this historic cemetery, not just to honor the veterans buried there, but to show all veterans that their sacrifices will never be forgotten.”

Perhaps, 2019 is the year that Mare Island Naval Cemetery will — finally — be restored.